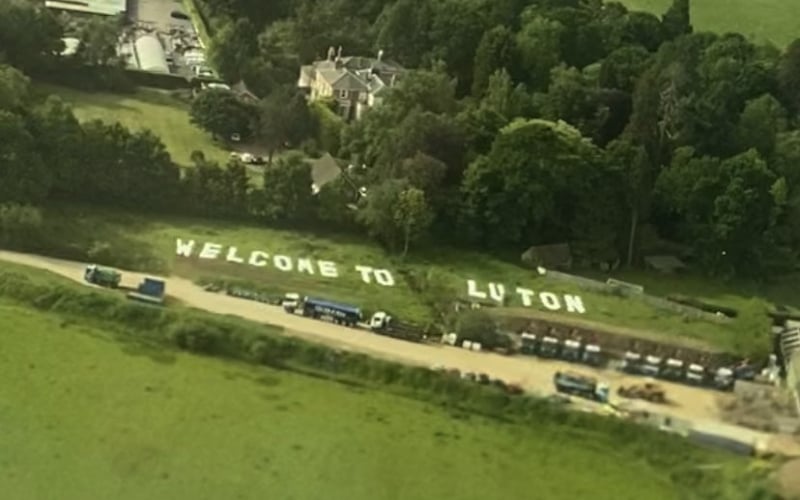 A YouTube prankster has managed to give quite a few travelers headed into London Gatwick airport a scare after he set up a “Welcome To Luton” sign on the approach path.

The “Welcome To Luton” sign first popped up on Twitter on May 21, shared by Twitter user @abbdesmond. In her initial tweet, she said, “Flying in to Gatwick, just before landing this is what is out the left window… great prank, deffo at Gatwick” along with the photo of the sign which could be seen if you look out the left window on flights landing from the east (runway 26 left). Some were skeptical that the sign was not real but other Twitter users confirmed seeing it, and Abbey then posted a video proving that her picture was indeed real.

The prankster quickly took ownership of his work, responding to Abbey’s tweet saying, “Guilty…”. His prank garnered so much attention that even major news channels including BBC and ITV covered the story in their morning roundup.

The man behind the prank was later confirmed to be YouTuber Max Fosh. In a video uploaded some days after the sign was put up, he explained that he wanted to do something that would go viral and end up on the news, saying that he wanted a story “that attracted all the best and worst types of attention.” That’s exactly what he got. Most of the responses on Twitter supported Max’s prank and the work on his channel, but others were truly bothered that his sign may have caused unnecessary panic.

Fosh decided to borrow an idea from a Milwaukee man who painted “Welcome To Cleveland” on his home/studio’s rooftop, which to this day still confuses some passengers on flights landing on runway 19 at the Milwaukee Mitchell International Airport nearby.

After examining traffic patterns at the London Gatwick airport, Fosh determined that because the bulk of arriving traffic came from the east, he would have to find a strip of land close by to the right side of the airport. A few weeks later, he found a couple willing to rent a clearing just about a mile away from the airport where he could install his sign. After spending about £4,000 to cover the cost to rent the area along with materials and other expenses, Fosh and his friends got straight to work, installing the required 14 letters (each about 8 meters by 3 meters in size) for his little experiment.

The next day he flew from London Heathrow to London Gatwick via Amsterdam to determine if his sign was readable from the air. It was. He even noted that some of the passengers on board his flight were confused as to which airport they had arrived at. Now that that was out of the way, he played the waiting game to see if it would end up on social media, which it quickly did. On May 21st, Fosh’s sign was posted on Twitter, quickly going viral and even caught the attention of many UK-based media houses and a few international names as well. Mission accomplished.

This isn’t the first time that passengers have been pranked with signs like these. As mentioned above, photographer Mark Gubin was the first to pull such a stunt, painting “Welcome To Cleveland” on his studio building located on South Delaware Avenue in Milwaukee back in 1978. When asked about the sign, he replied saying “it was Wednesday” and that there was no real intention behind his painting. The sign is still on his rooftop to this day, and has turned into an attraction, still confusing some passengers coming into Milwaukee.

Brad Heasman from Sydenham, New South Wales also carried out a similar stunt back in June 2021, painting “Welcome To Perth” on his warehouse building located just short of runway 16 at Sydney’s Kingsford Smith Airport. The sign also caught a bit of attention, first popping up on Facebook and Reddit before making it to the local news stations. It’s unclear if it is still up, but photos from December 2021 show that it was still present.

Fosh’s “Welcome To Luton” sign will stay up until June 30, so if you happen to see it, take a picture.