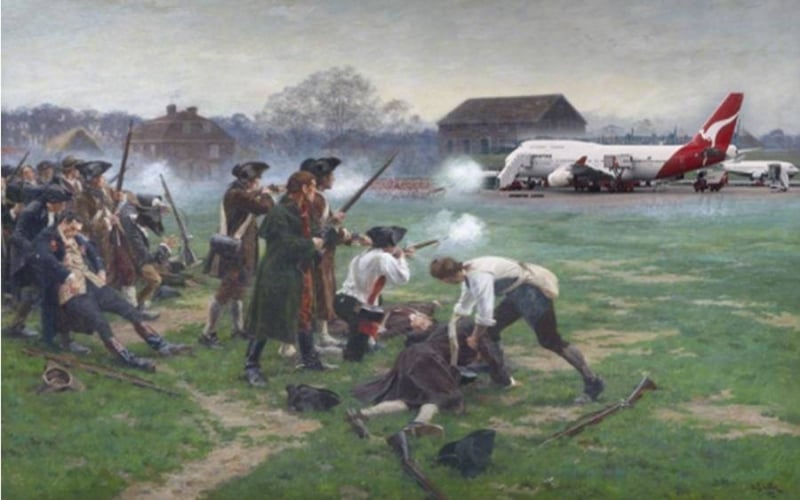 President Trump’s Fourth of July speech did not exactly go as well as he hoped it would, but thanks to a history blunder, a wonderful travel meme war born.

During the hour-long Independence Day speech, President Trump made reference to the American Revolutionary War which took place between 1775 to 1783, but erred by saying that Continental Army “took over the airports” from the British during that time.

He is quoted saying, “our army manned the air, it rammed the ramparts, it took over the airports, it did everything it had to do, and at Fort McHenry, under the rockets’ red glare, it had nothing but victory.”

The slip of words certainly did not go unnoticed as viewers quickly took to social media outlets to highlight the error. With the war taking place in the 18th century and the first airplanes taking flight in the 20th century, people were quick to generate memes to make fun of the situation, filing it under the #RevolutionaryWarAirportStories hashtag.

Here is the clip for those who missed it.

Donald Trump has claimed American soldiers in 1775 "took over airports". The first successful plane to take flight was in 1903 🛫

When asked about the mix-up, Trump told reporters that there were technical difficulties with the teleprompter, and also blamed the rain for making it hard to read when it was functional.

“The teleprompter did go out and it was actually hard to look at anyway because there was rain all over it but despite the rain it was just a fantastic evening.”

Social media commenters were quick to come up with catchy alternate titles for the war including “The Battle of Baggage Claim” and “The Battle At John F. Kennedy International Airport, 1776”.

No matter which side you take, you have to admit these are pretty funny.

Did we really take over the airports in 1776? pic.twitter.com/ysoqtdlVIT

Thanks to the president @realDonaldTrump, America has a new airport: -Revolutionary War Airport!#RWA #1776 pic.twitter.com/M0aHc0VZSx

This is an ACTUAL picture of George “Maverick” Washington getting ready to Bomb the British Airports during the Revolutionary War. #RevolutionaryWarAirports pic.twitter.com/yT8SVwWKIM

Martha, the lady at the gate is saying Snickers is not an Emotional Support Animal – something about “only miniature ponies.” Do you have his paperwork? Oh also delayed bc of some gate issue – our plane is still at LAX. Have you heard of “California”? #RevolutionaryWarAirport pic.twitter.com/VK8rNPNL9h

Even the TSA Wikipedia page was temporarily defaced, pointing the agency’s “roots” to the Continental Army.

But hey, maybe this might be the explanation we’re looking for.