After completing my short Caribbean hop to St Lucia, St. Maarten, Curacao and Aruba, I decided to make a short stop in New York to visit a friend before returning home.

Delta operates two flights to Aruba (one to Atlanta and the other directly to New York). Depending on demand, the airline may either use a 757-200 or 737-800 or -900ER. For most of 2019, it seems the airline used 757s to operate to AUA-JFK route. As Aruba sees mostly VFR traffic, Delta sends 757s with recliner first class seats rather than those with the lie-flat beds. *Sad face*

I found a pretty decent “First Class” fare at just short of $400 for a one-way ticket to Kennedy. I felt I couldn’t go wrong with DL as tickets in this class generally hover around $600-700 and economy at that time was $260. As I generally fly American Airlines, I also sought out the option of AUA-MIA-JFK as AA was operating their 777-200ER on the MIA-JFK leg, but due to an equipment swap and a much higher price tag of $800+, Delta was the obvious choice.

Generally a fare like this with a competing carrier would have been labeled as Business Class. 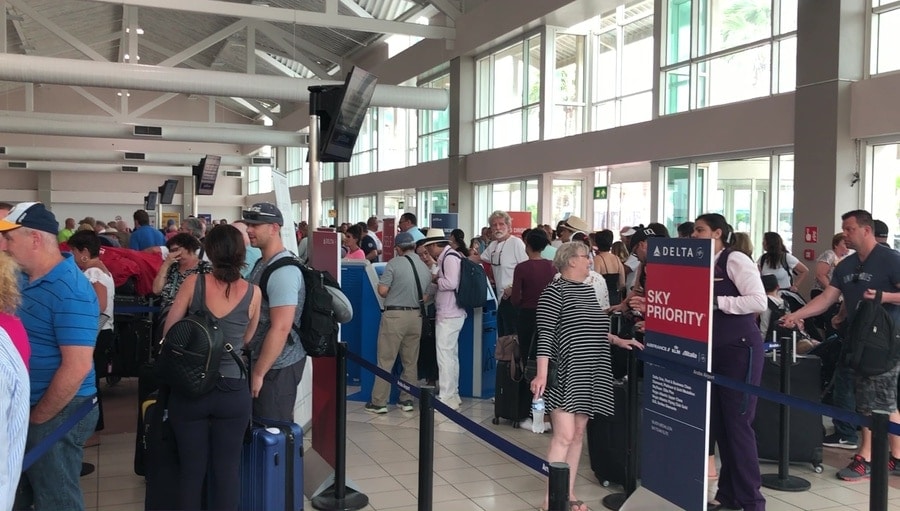 For those familiar with Queen Beatrix, the airport is segmented into two areas, one for flights to the United States and the other section for all other outbound flights. This is because Aruba offers US Border Pre-clearance, something I did not know about until I got there. The Bahamas and Bermuda are the only other two islands within the Caribbean that offer Pre-clearance.

With multiple flights departing to the U.S. between 1-5 p.m, the check-in area was bustling with activity. Getting to the Delta counter was actually a bit challenging as the lines extended as far as the terminal entrances. After making my way through the crowd, I was met with a very empty Sky Priority line. The Delta counters are all the way to the left, which means that once check-in was completed, it was an easy walk outside towards the security checkpoint.

Here’s the interesting part. As there is US Border Pre-clearance, you must first go through the regular security screening process, then proceed to the US Customs area to collect your baggage and speak to a customs official to preclear. From there, you then make your way to the actual gates, but not before having to go through a second screening point, this time manned by TSA officials rather than by local security.

In cases like this where there is pre-clearance, it’s always a good idea to be at the airport a full 3 hours before your flight time. Thankfully I usually show up early, so I saved myself a lot of trouble.

There is a small food court just before the pre-clearance area, where I snapped some ramp photos. At this point, one of the airport officials asked me if I was headed to the U.S. He informed me that I couldn’t spend much time lounging around because of the long lines at pre-clearance. He was right, as the process to get cleared took about 45 minutes.

After clearing customs, and checking through the TSA checkpoint, I was finally in the departure terminal. The good news is that I would be deboarding via a domestic gate at JFK’s Terminal 4 straight to land side without a customs check.

For those curious about lounge access, there is the International VIP Lounge but as the flight I was on is considered a U.S. Domestic flight, Delta does not offer complimentary access even for First Class customers. If you still want access, you can get in if you have membership with Priority Pass, or just paying $55 for a day pass. 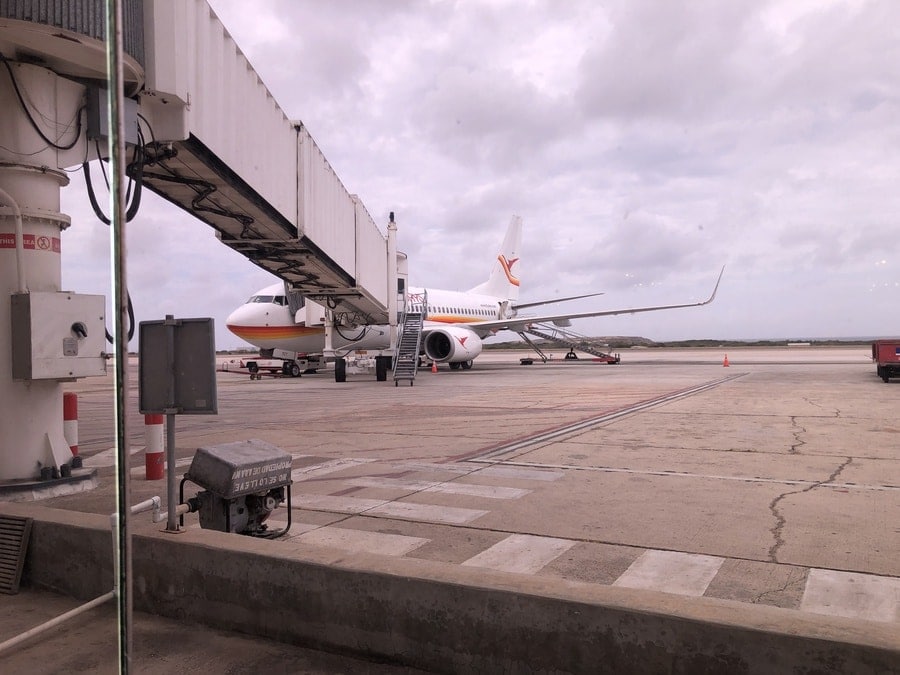 This Boeing 757-200 (classified by Delta as the 75D) features 5 rows of 2-2 recliner-style business class seats, but is marketed as domestic First Class seating. As I was almost the last person to board when First Class was called, I did not get the chance to take a proper photo, so don’t mind the loose napkin and pillow.

As we boarded through the second left door, I had to take a quick walk through the three rows of Comfort Plus seating before getting to my row. 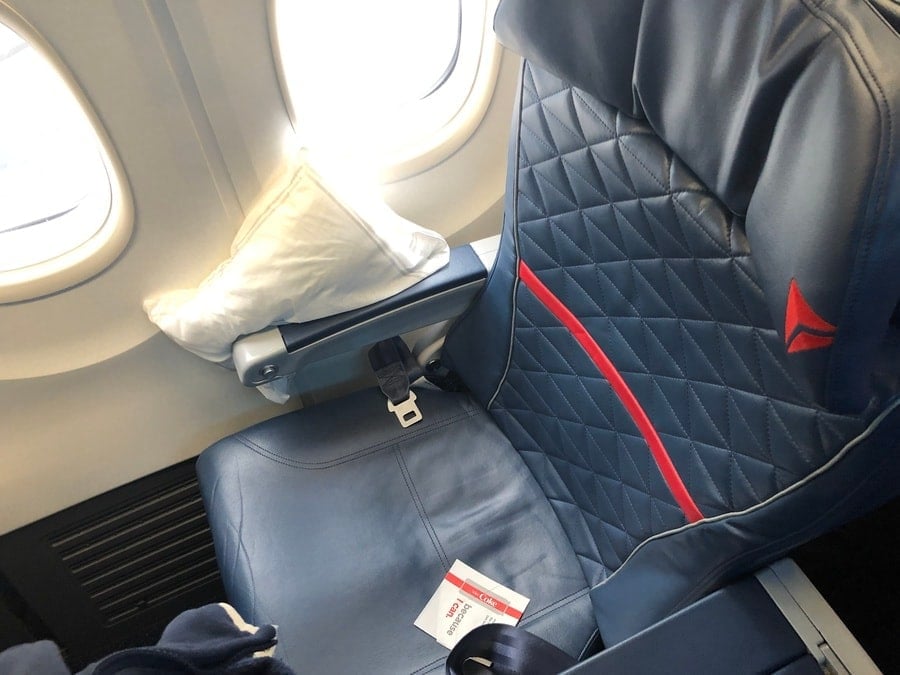 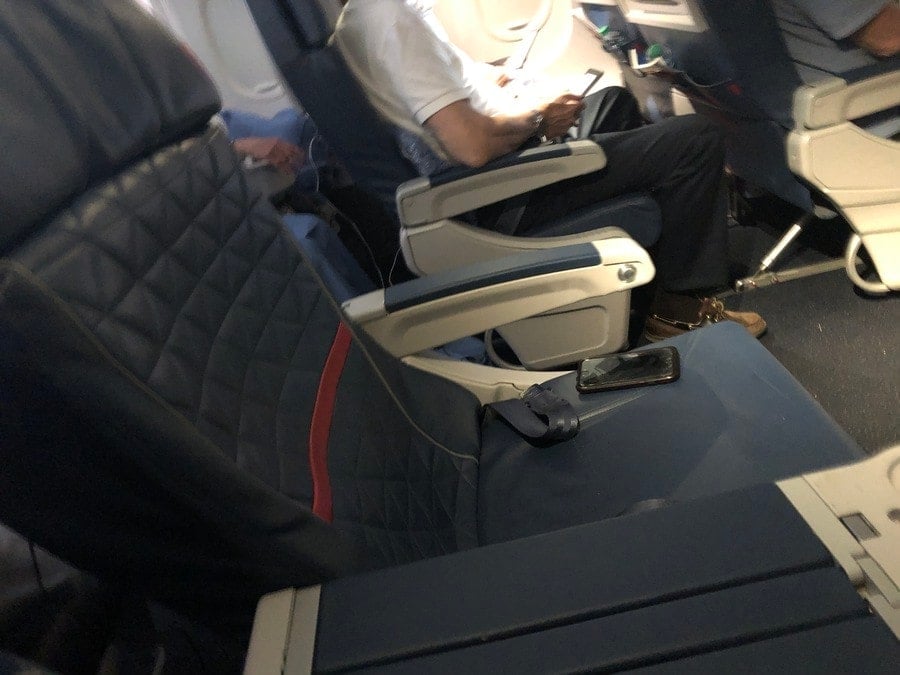 First Class seats feature 37 inches of pitch, but the foot well space was actually quite impressive. Usually on 737s, I would have a hard time placing my feet next to my bag, but I was still able to stretch out my legs even with my laptop bag under the seat in front of me. Seat-back storage space was pretty decent as well. I was able to fit my entire jacket and a bottle of water without it getting in the way of my knees. 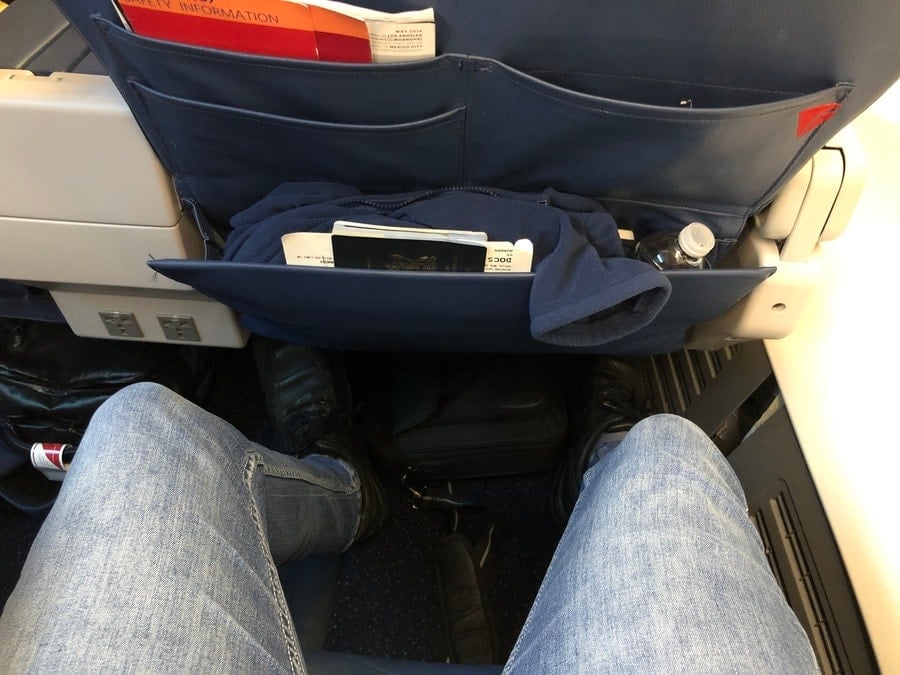 The usual bottles of Dasani water await passengers boarding in the forward cabin. 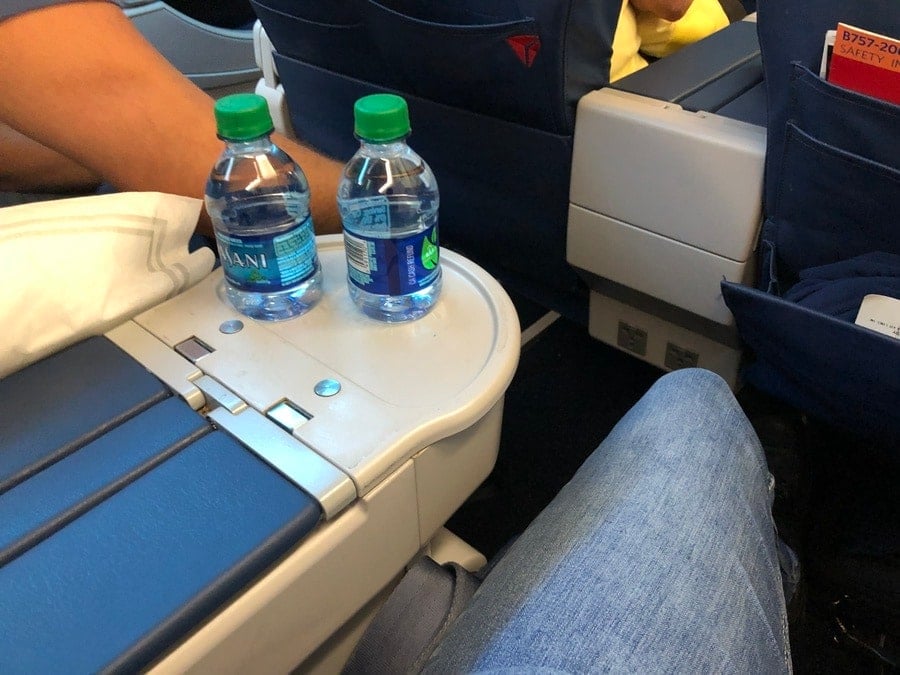 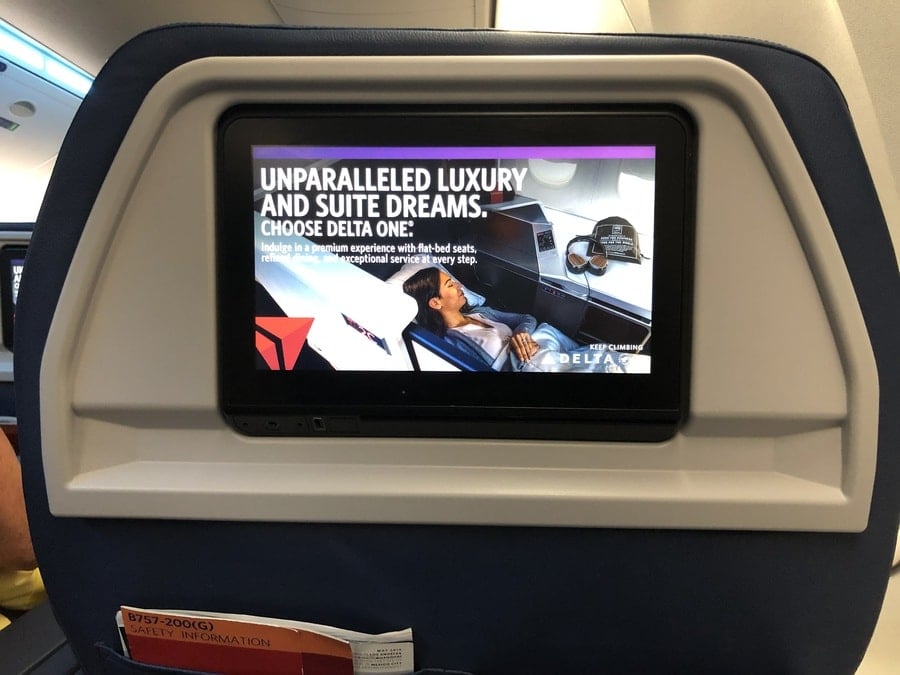 Even though this isn’t a new fact, I was still pleased to see that Delta upgraded this 757-200 cabin to feature the newer Boeing Sky Interior with blue mood lighting and much larger and more easily accessible storage bins. After fighting to fit my suitcase in the tiny Aruba Airlines CRJ overhead, these bins looked huge. 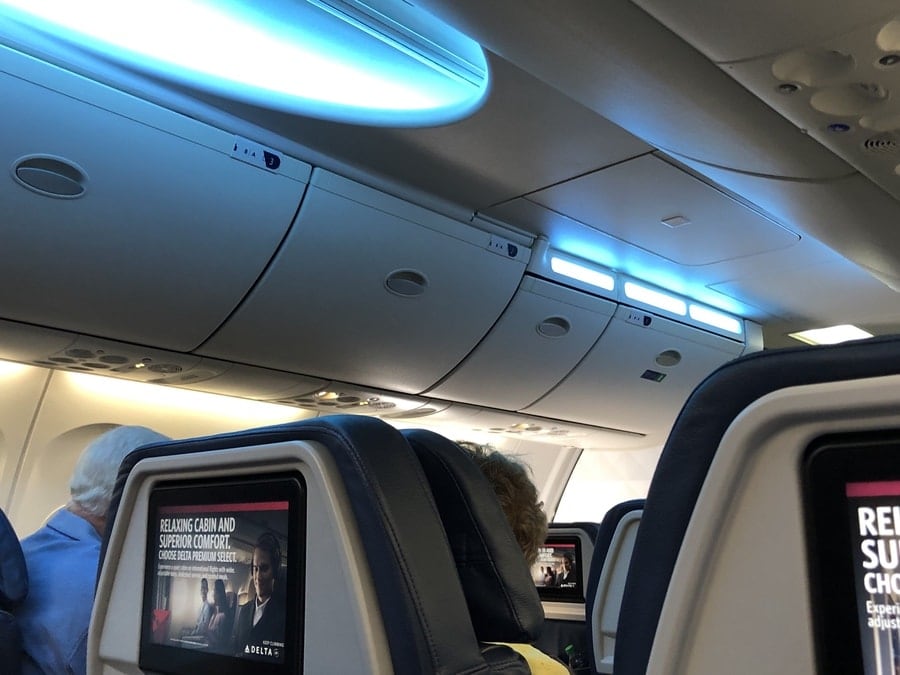 Besides the Dasani water, we were offered pre-departure beverages, including water, juice, soft drinks or wine. Even though I usually go for a juice or soft drink, I decided to have some white wine instead. I’m no connoisseur though, so I’ll keep my comments to myself (not that it tasted bad). 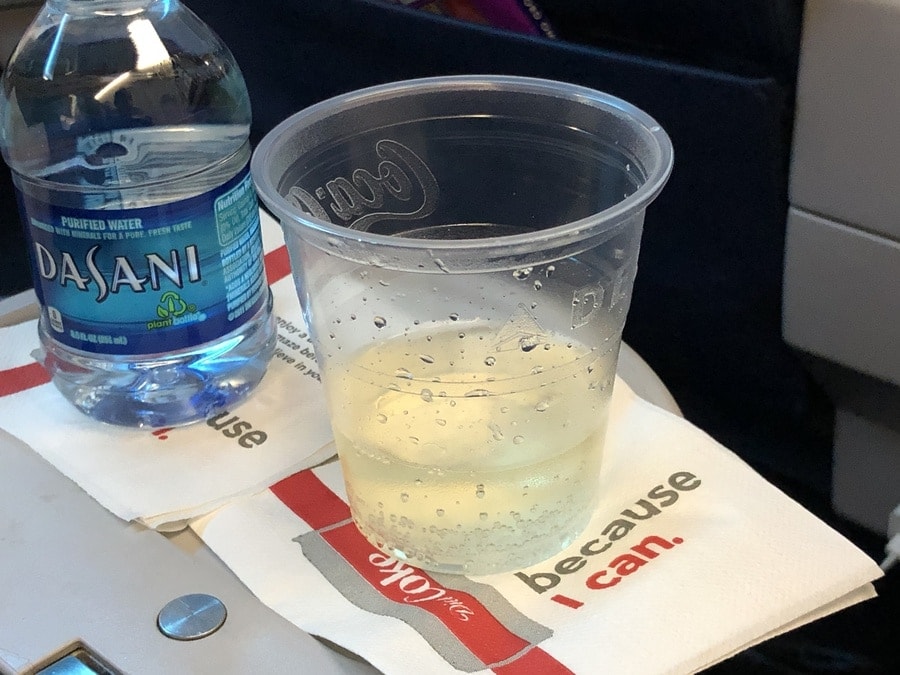 Delta sent me an automated email three days before my flight, allowing me the option to pre-select my meal option. I found it strange that I could only manage this option via the link in my email rather than from my booking page (let me know if I’m wrong here). Regardless, it was nice to be able to pick option rather than having to wait for the day to see they offered.

I went with the beef stew, and I actually got what I requested. 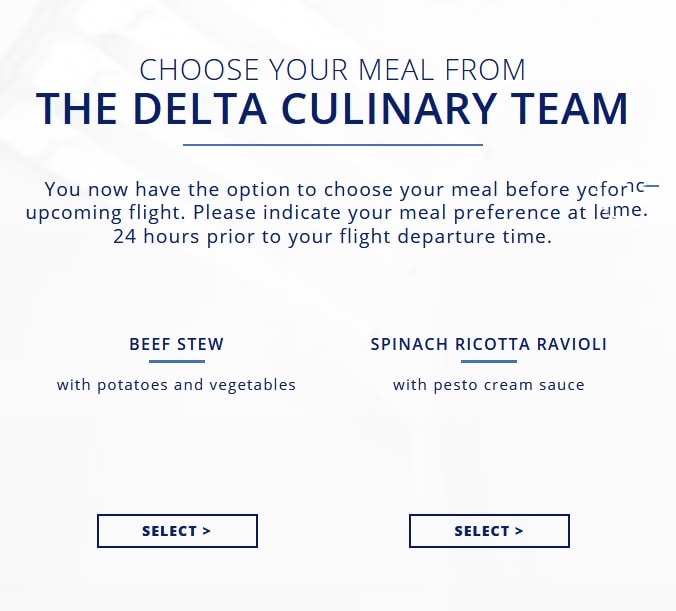 As with other carriers, hot towels were passed out just before meal service. I really missed the bowl of warm nuts though. 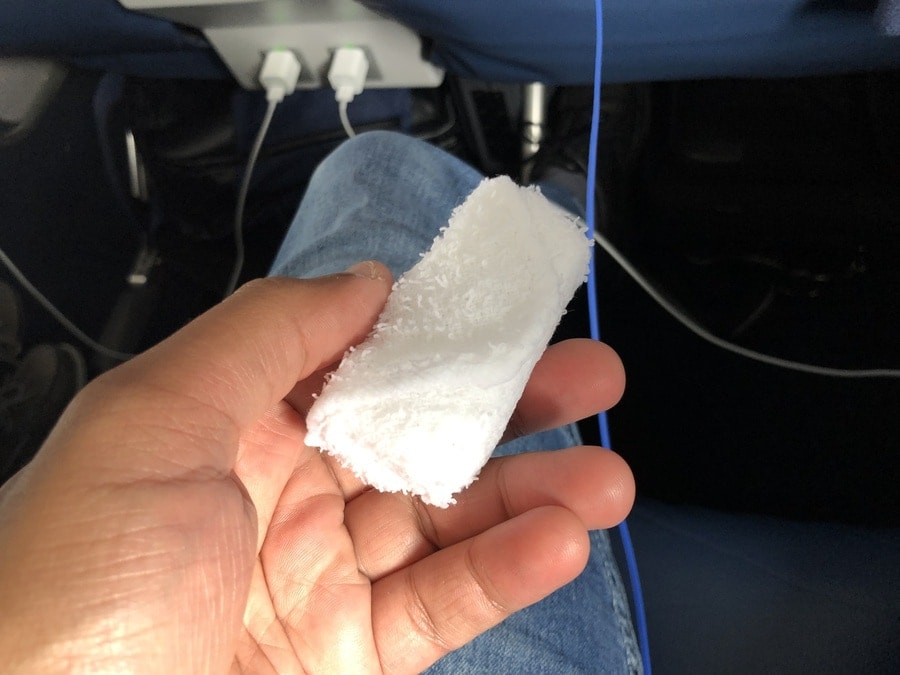 Food was served about half hour into the flight, and after two glasses of Sprite, my meal was served on a single platter. Besides the beef stew and potato slices, there was a bread roll and cheese salad. While I prefer dessert (carrot cake in this case) to be served after the main course, I wouldn’t take away points for them including it with the main meal.

My only complaint really was that there was not enough stew sauce to dip the potatoes in (as they tasted bland), but the rest meal was really enjoyable. The carrot cake itself was moist, with a good balance of sweet, even though the frosting was a just a bit too hard for my liking.

While the presentation was not stellar, I was left pretty satisfied. If anything, I wish I could get in on more of that beef. 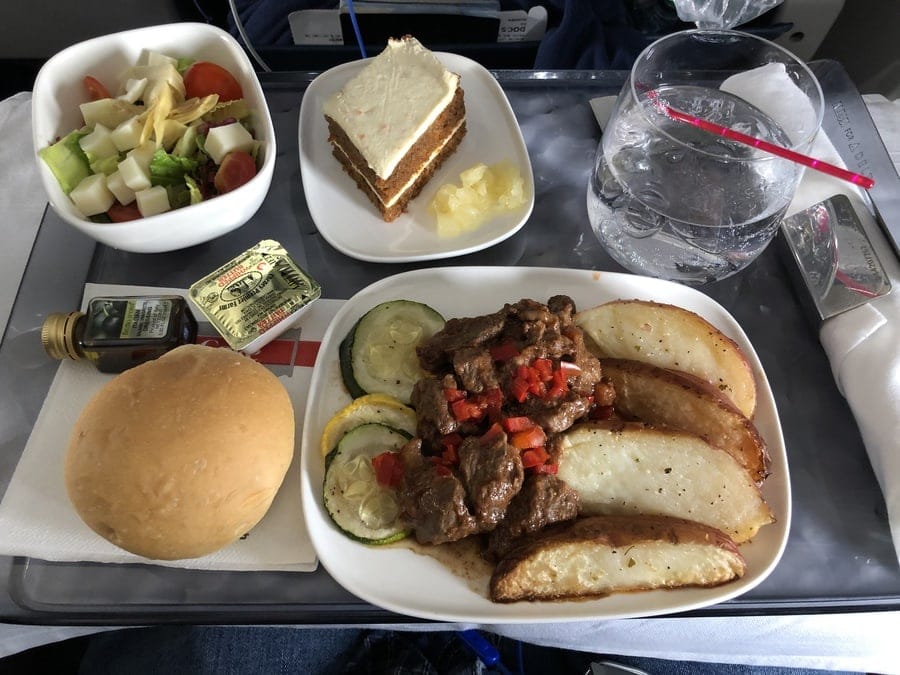 I self-medicated on Sprite for the rest of the flight.

Delta has a decent range of on-demand TV shows, movies, and music, as well as Live TV provided by DISH network. I would say American does a better job when it comes to on-demand choices, but I was still pleased with the selection. I’m still a fan of watching TV on screens rather than on a portable device, so Delta gets extra points here (even though you can stream to your mobile devices via the Gogo Entertainment app). 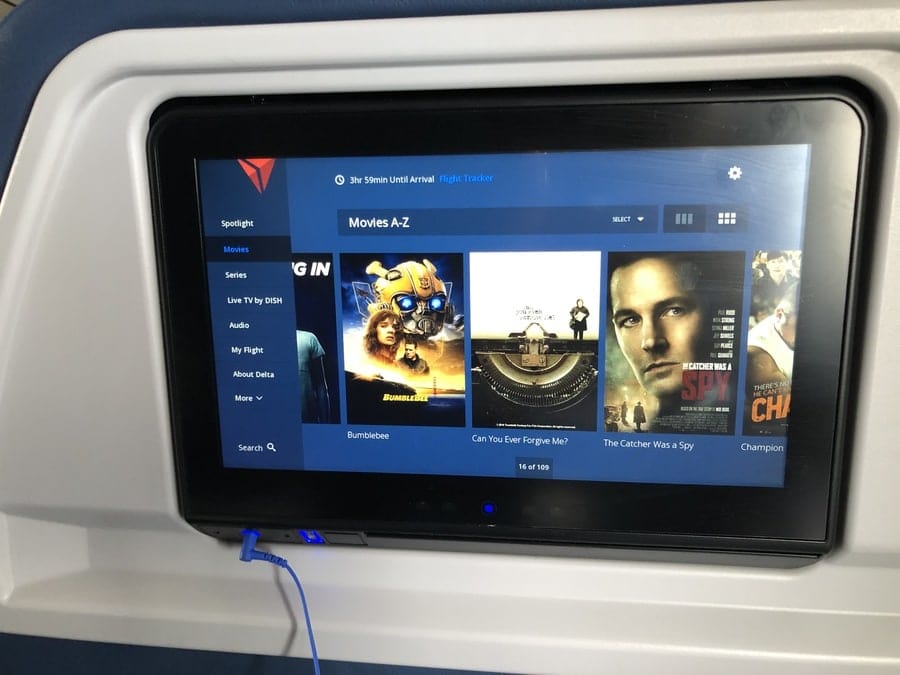 Delta uses Gogo to provide Ku-band satellite-based data streaming on some of its 757s. Other models in their fleet feature the more advanced 2Ku band transceivers, as the airline moves towards transitioning their entire fleet to 2Ku. Here is a breakdown of the pricing options. 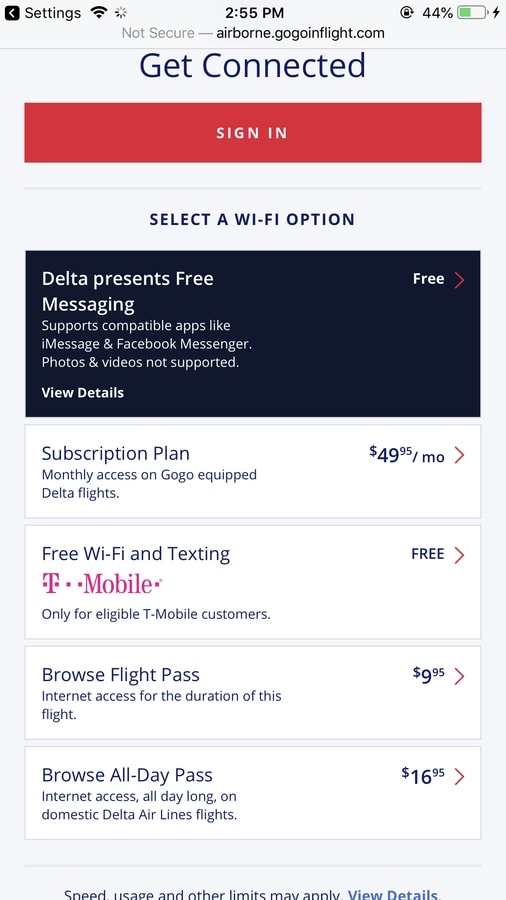 Speeds were not good at all at just 0.62 Mbps. It’s fine if you want to text someone, but even browsing Facebook was a bit of a task as images took some time to load. I’ve never had any luck getting good speeds with Gogo, and much prefer airlines that use Viasat. The only positive was that Wi-Fi worked for the entire flight.

Oh well, at least there was IFE to keep me occupied.

As more airlines slowly migrate to making lie-flat seats in narrow-bodies the norm, there’s really no big deal flying in recliner seats besides a bit more legroom and a decent meal, but my Delta crew made up for that with fantastic cabin service.

As this was my first Delta flight (not easily accessible from where I live), I can’t give a general opinion of the airline, but the crew members on this flight were very pleasant and checked up on us regularly.

In the age where seat size and space continue to get narrower as the days go by, I couldn’t pass up this deal to fly in front. It was nice to see that Delta modernized its older aircraft to include IFE in every seat back, as well as adding the newer Boeing Sky Interior cabin with bigger bins.

There really wasn’t much to say about this flight as the entire process was generally smooth. As I travel with my carry-on only, it was a bit tedious have to unpack my laptop and liquids twice while in the departing airport, but it’s so much nicer being able to go directly land side from the gates without having to pass through customs.

For just a bit under $150 more that economy, I was able to get a much more comfortable seat and a rather tasty meal. It’s unfortunate that First Class passengers do not get lounge access, but lounges would be packed if that were the case, especially given that most of Aruba’s flights to the United States depart around a 4-hour window.