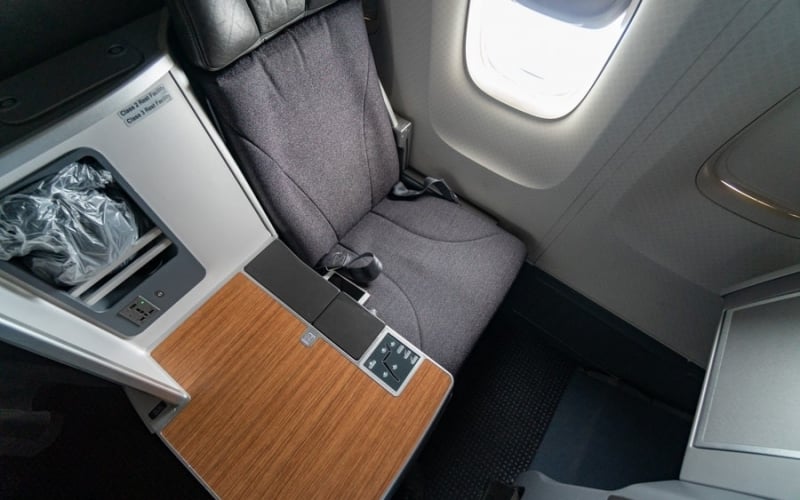 While planning out my Caribbean hopping adventure, I added a few days to New York into the mix to visit a friend. When I was looking for a flight back home to Trinidad, I found a one-way ticket with American Airlines from New York (JFK) to Port of Spain (POS) with a stop in Miami (MIA). There were direct alternatives with both JetBlue and Caribbean Airlines, but as I never flew American’s 767 in business (domestic first in thie case), it was a no-brainer.

Back in 2014, American introduced an updated business class cabin on board its aging Boeing 767-300ER fleet, featuring 7 rows of staggered, lie-flat seats in a 1-2-1 configuration. With WiFi being added on later, it was definitely a good reason to give this product a try.

I actually was looking for a flight from New York to Trinidad, but as mentioned above, American operated their 767s on the JFK-MIA route as part of equipment repositioning for long-haul operations. The one-way flight from JFK to POS with a stop in MIA cost me $499, which was a pretty good deal, given that the the route usually hovered anywhere from $600-900.

As I only had a carry-on, I checked in via the American Airlines app and proceeded straight to the security check point at Terminal 8. As there is a separate section for priority customers, the security process was very quick. I was able to clear within 3 minutes, with the only delay being having to wait for bins to come off the automated sorting line.

The airport itself was relatively quiet around midday, and with little to do, I decided to head to my gate to kill some time and grab a bite. Flying domestic first class does not allow access to the Admirals Club unfortunately.

the only service rep interacting I had really was when I was called to the counter to scan my U.S. Visa as I am not a citizen of the United States. Eventually, my aircraft arrived after completing the MIA-JFK run as AA54. 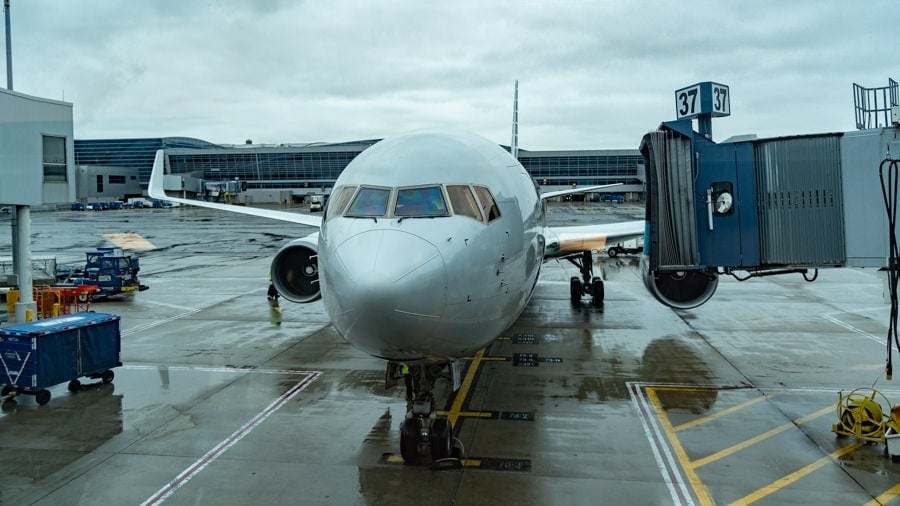 Boarding started around 12:40 p.m. (just a few minutes later than expected). After Concierge Key customers were called, First Class passengers were then invited for boarding. With a quick scan of my mobile boarding pass, I was on my way.

The refurbished cabin features 7 rows of almost lie-flat seats in a staggered 1-2-1 configuration, with even numbered seats along the aircraft body being closer to the window (great if you like privacy). The general configuration is quite similar to other business class products on 767s such as Delta, Austrian Airlines, and Japan Airlines for instance. This is one of the more ideal layouts as everyone has aisle access, which means you don’t have to bother your seat mate to get up to use the bathroom.

For those who appreciate windows, avoid row 7 as one of the units is blocked out to accommodate cabling within the walls.

There are also updated storage bins, with the larger units running along the wall and opening downward. The center bins are more suited for smaller suitcases and personal bags. 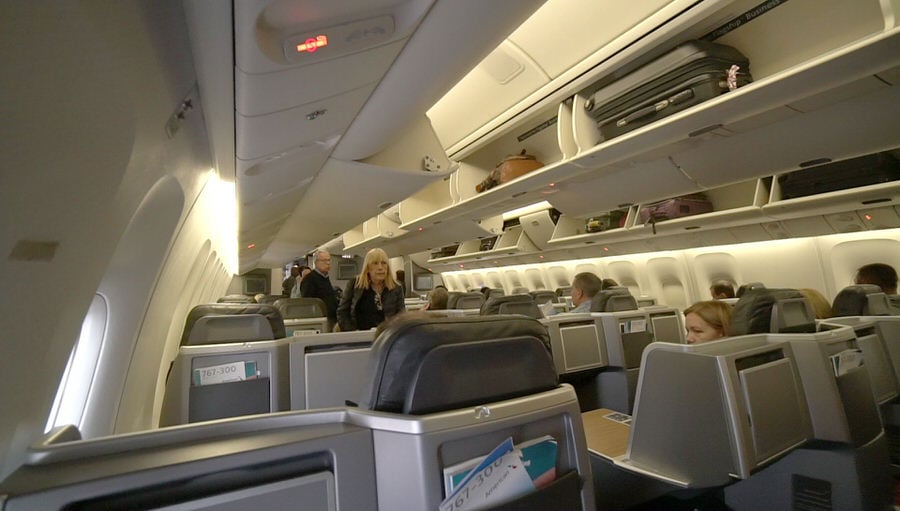 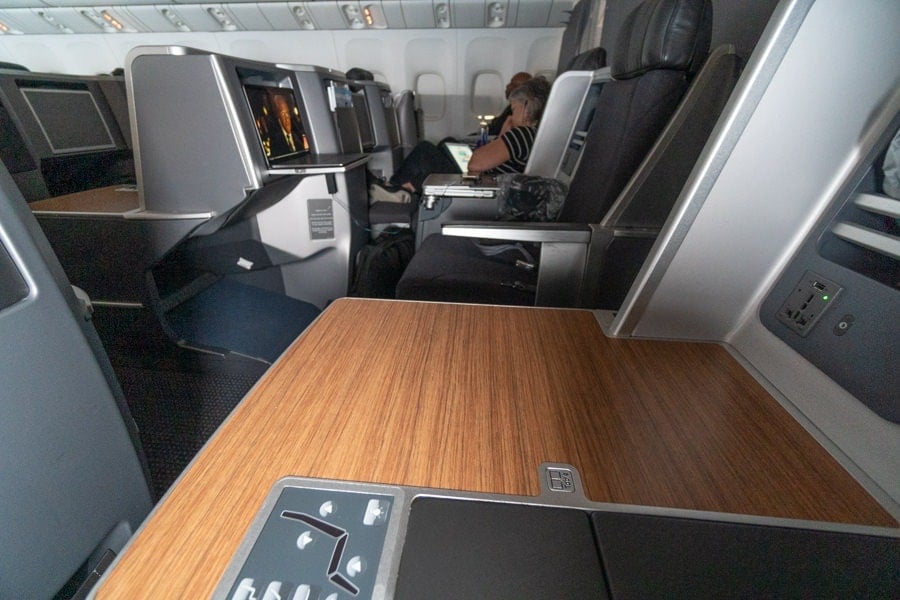 The seats themselves are covered in a dark gray fabric, with leather headrest, measuring in at almost 20 inches in width, with 60 inches of seat pitch. In the upright position, there was more an enough legroom to stretch your feet.

Depending on which seat you sit in, the console will either be positioned to your left or right (in my case). There is ample space to rest your drinks and snacks, with the small cubby for storing smaller items such as your phone. There is also a power port just below it. The seat controls are located near the top of the console with a leather arm rest just below it. The controls lights up when you press the buttons, and dims shortly after (for those who travel on red-eye flights). 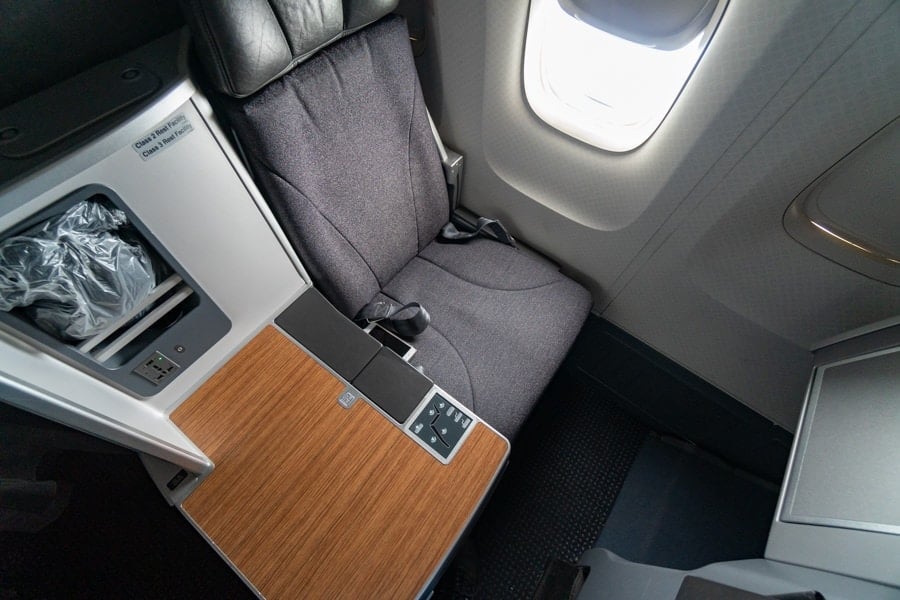 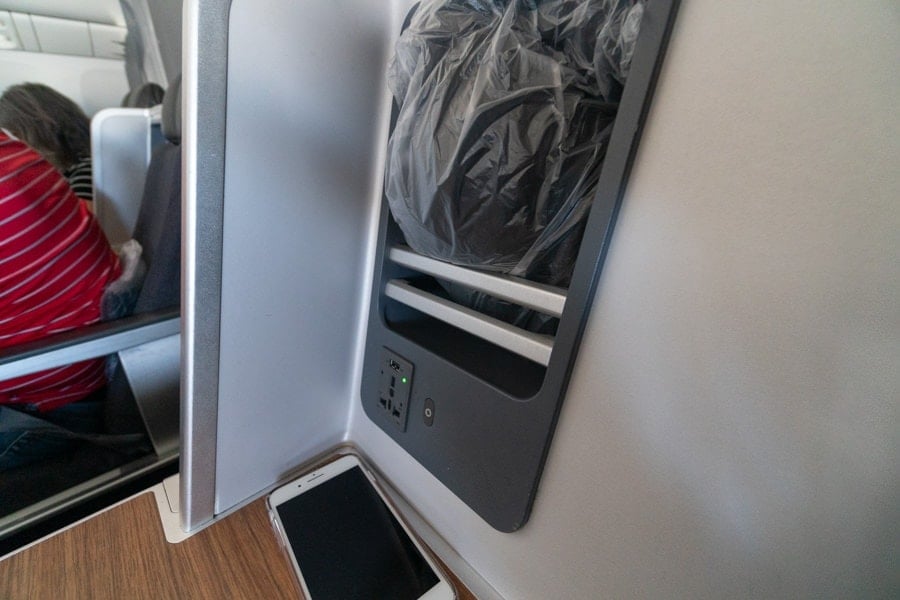 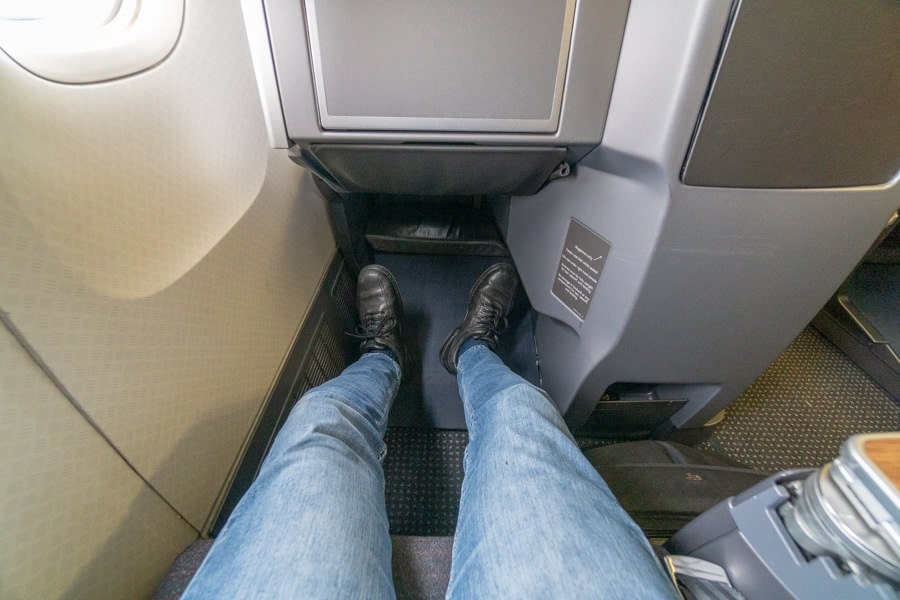 As there is no foot rest directly below the seat, your legs may dangle when sitting in the reclined position, which honestly felt a bit weird at times. At 5 feet 10 inches, there was still a decent amount of wiggle room for my feet even when the seat was fully extended into the lie-flat mode. Given the short flight time, it was hard to take a proper nap when you’re an AvGeek. Hopefully I can get a review in on one of their longer segments to cover this feature.

Looking forward, there is a drop-down table along with a pocket area to prop tablets on, along with another power outlet. I will talk more about this under the Amenities header.

Seat storage was not the great as there was only one other storage pocket near the floor below the magazine holder. There is also no stowage space for small bags, and we were also reminded to store those items in the overhead bins. 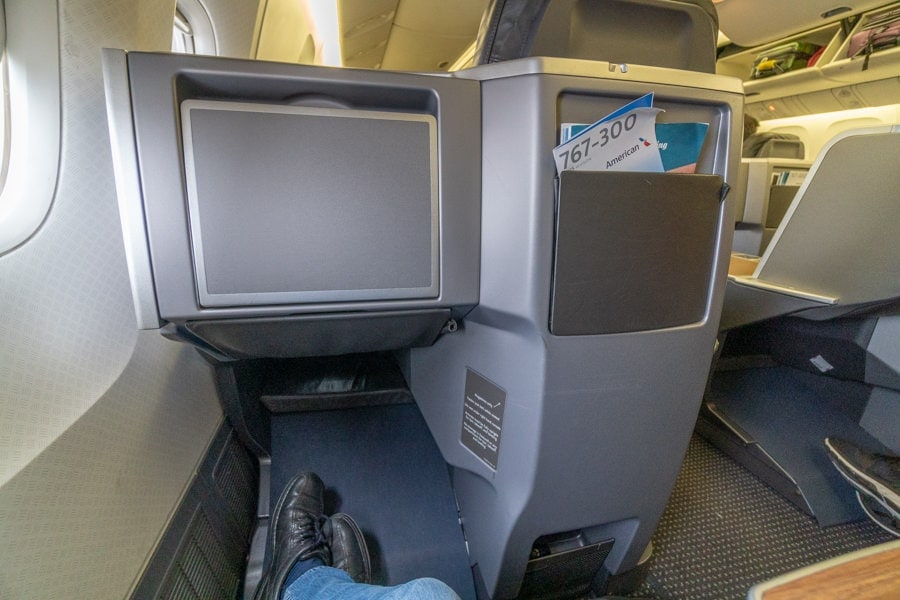 The dining tray table pops out with the press of a button from under the console. Some force is required to release the table. From there on, you simply have to slide the table forward, unfold it, and then pull it back towards you. 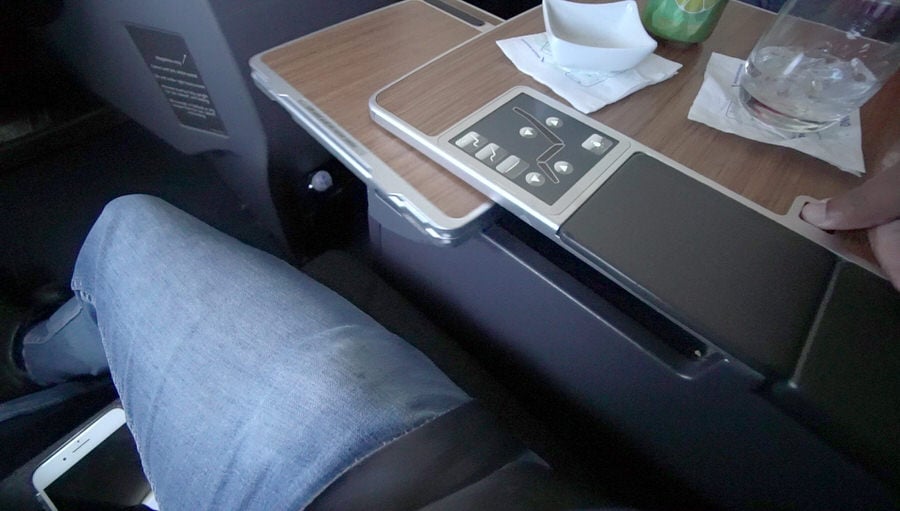 The plastic paneling has definitely seen its share of abuse as there were scratches everywhere, but the seats and tables were in very clean condition otherwise.

As this was a shorter domestic flight, passengers were only given blankets.

Looking out the window, row 8 gives you a lovely view of the port side CF6-80 engine as well as the surrounding scenery. Unfortunately I always seem to leave in bleak weather whenever I visit JFK. 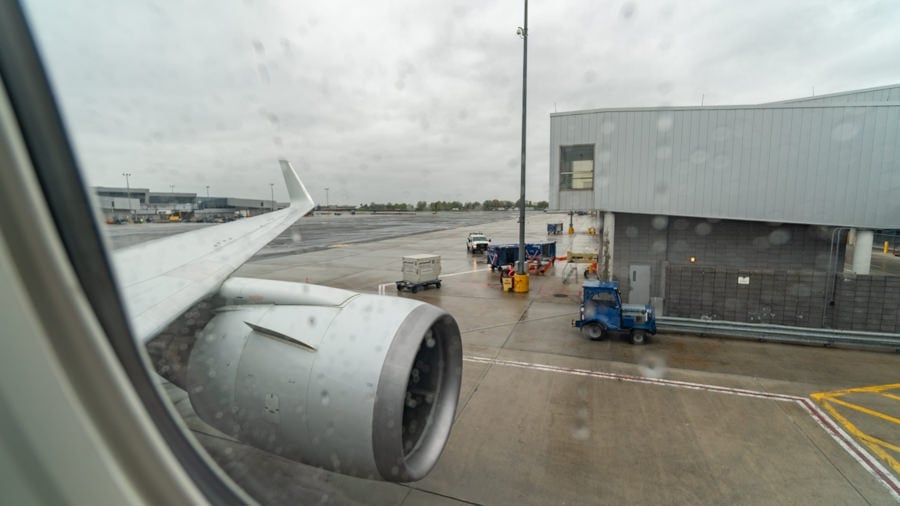 Like many other 767 washrooms in business (or domestic first) class, they are usually cramped and standardized. Something simple like a faux plant in the corner could have brightened up the environment just a bit, but I did not expect much on this older bird. 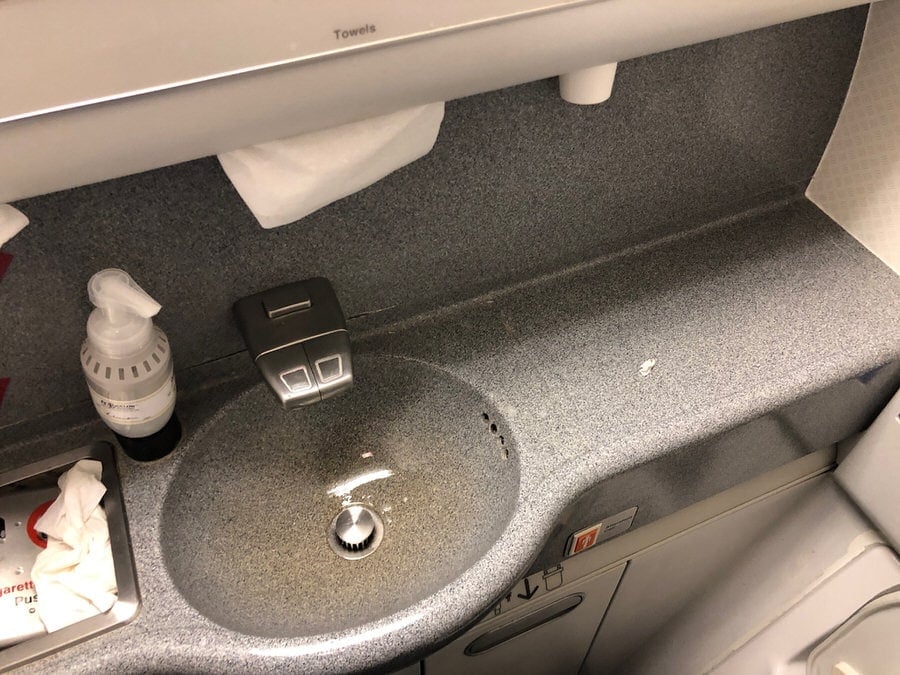 During the boarding process, first class customers were offered a choice of juice or water. I could never get over the inconsistency with regards to the cups being used, as I’ve mostly received pre-departure beverages in proper glassware rather than in plastic cups. I would have assumed that this service would have been a bit more formal with glassware usage given that we were in a proper business class cabin. 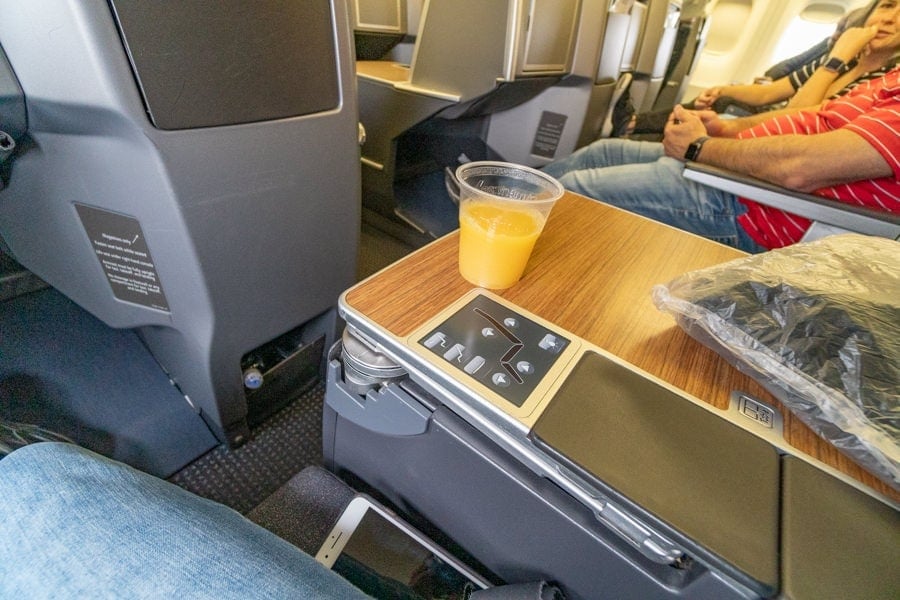 Once the flight was under way, we received the usual hot towels, bowl of warm, assorted nuts, and drinks. As I avoid alcohol while flying, I usually either settle for coffee or a light drink, with the latter dominating this round. 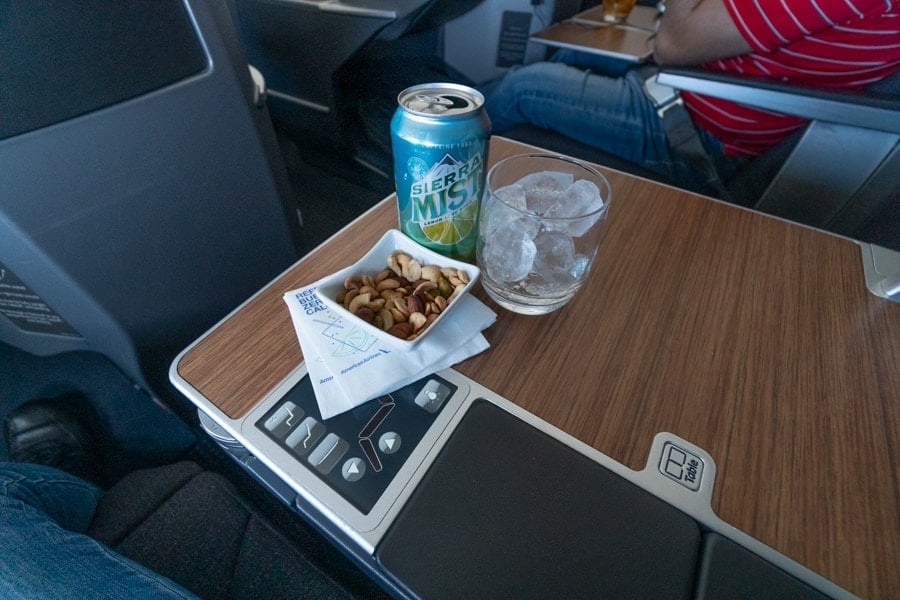 For this segment, I pre-ordered the “Spinach and Ricotta Cheese Raviolini”. 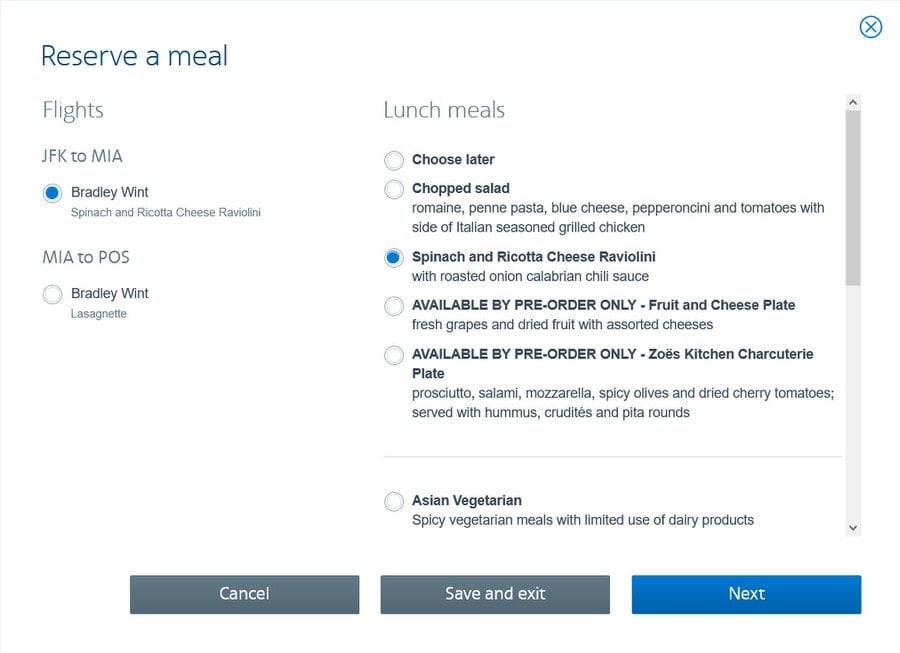 Unfortunately, I did not realize until well into my meal that I had received the wrong selection. It seems that there was a mix up either in the galley or with labeling, as two other customers complained about receiving tray items that they had not ordered.

I was quite disappointed, as I am not a fan of blue cheese and bland salads. As there was little to no taste besides the bitterness of the cheese, I had to use all my dressing and salt to give it some semblance of flavoring. The “seasoned” grilled chicken was very dry, and serving it cold made things even worse.

To top things off, the bread was very hard, but I stomached it, given that I could not make my way past half the salad.

While the issue with the salad is more a matter of personal preference, the dry chicken and hard bread is not excusable.

I do take blame for not properly following up with the meal selection as I had reserved my meal selection almost 30 days in advance, and honestly forgot what I had chosen.

My lowered rating below would rest more on the tasteless chicken and meal mishap. 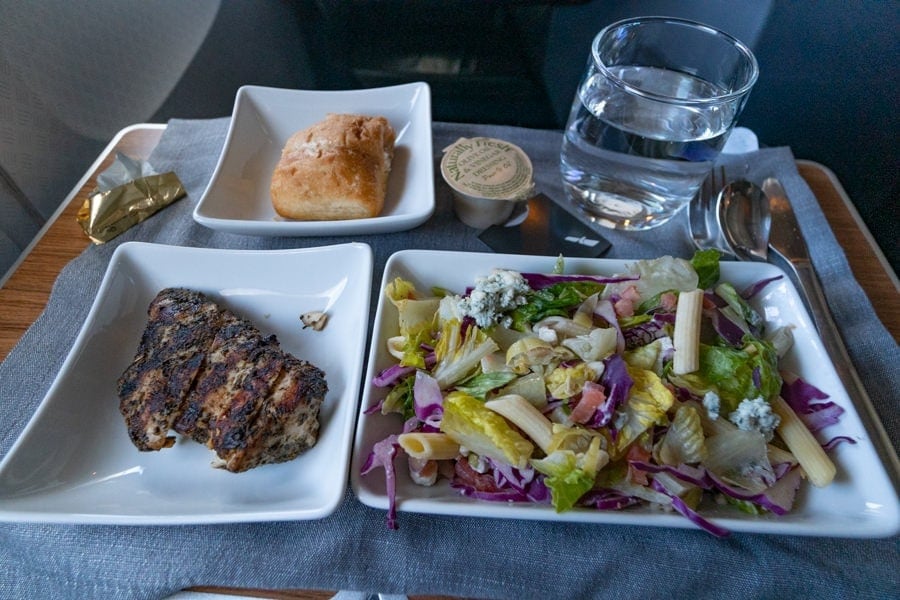 Thankfully, I was able to wash away my sorrows with a warm, soft cookie and additional drinks. 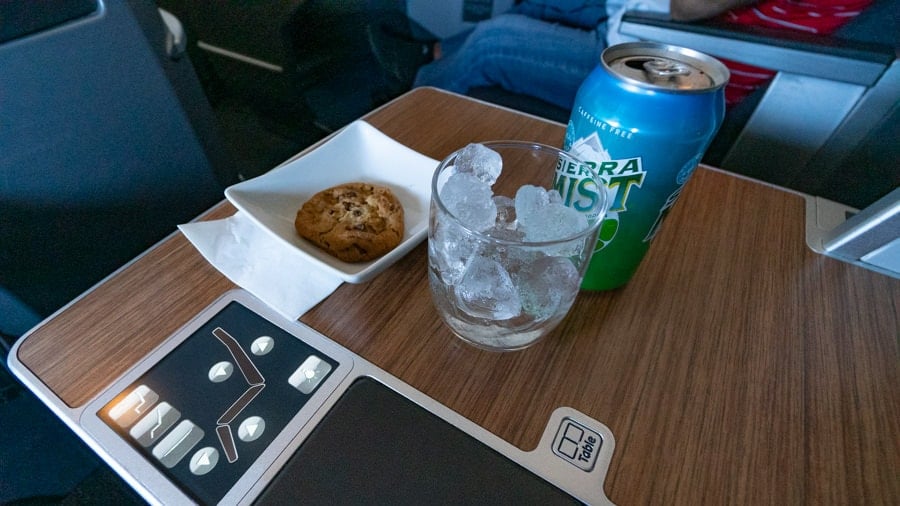 The airline not to install personal TVs (PTV), and eventually added satellite-based Panasonic Wi-Fi and streaming services. I am not sure what procedure still applies, but passengers on long haul international flights are given tablets that can be propped within the table holder in the back of the seat in front of them.

However, passengers can also use their own devices to access the entire library of American entertainment options via their app (which must be installed before departure). Streaming music, movies and TV shows is free, but Wi-Fi comes at a cost as follows:

American’s entertainment section is always pretty good as they have a wide choice of new movie and TV releases along with older classics.

Internet speeds were abysmally slow, and after multiple tests, I was finally able to land at a measly figure of 0.63 Mbps. Give me a ViaSat connection over this any day.

Like many carriers, American is has started phasing out seat-back IFE systems in favor of streaming options. This is evidenced by the lack of PTVs on their new MAX 8s, as well as “Project Oasis” 737-800s and A321s (American and ex-US Airways aircraft).

This obviously comes as a big downside for those who don’t own tablets or smartphones, however for those who have it, there are now additional power outlets, and support stands to prop your devices on. The biggest plus is how much faster the streaming service is to use in comparison to the PTVs. There is considerably less lag, and I suspect the only thing that could bog down your experience would be your devices’ performance.

On the 767, this is a good step up coming from a bird that previously had no streaming or Wi-Fi options at all. The provided tablets (long haul) also had much less content than what was offered over the streaming system.

Looking past the meal mix up, the crew members were very helpful, with one of them being particular sassy, in a good way of course. They were very prompt with meal service and clean up, and checked in with all passengers on a regular basis. It was also nice to see them having a bit of small talk with some of the passengers during the service.

As a regular traveler with American Airlines, this was one of the few flights where I was honestly pleased with the crew’s service. I think if I had realized earlier that there was a mix up with my meal, they would have gladly accommodated me as one of the two other passengers were able to switch with ease.

Coupling in a very small delay pushing back from the gate, as well as added flying time in the Miami area due to a passing weather system, we still made it to the gate in reasonable time (about 15 minutes past the scheduled arrival time). Besides my lackluster lunch, service was great and having seats that can properly recline and go flat was a plus.

While American does offer better business class seats on their 777s and 787s, it’s always nice to fly on a widebody on a route that is generally services by a 737-800 otherwise. It’s a shame the flight time was so short though as just when I started to properly settle back after my meal, we had already started our descent into Miami.

As these flights usually come up due to repositioning purposes, they may not always be available throughout the year. There is also a 777-200ER servicing the route, but unfortunately is departed much later, well past the scheduled departure time of my connecting flight that afternoon.