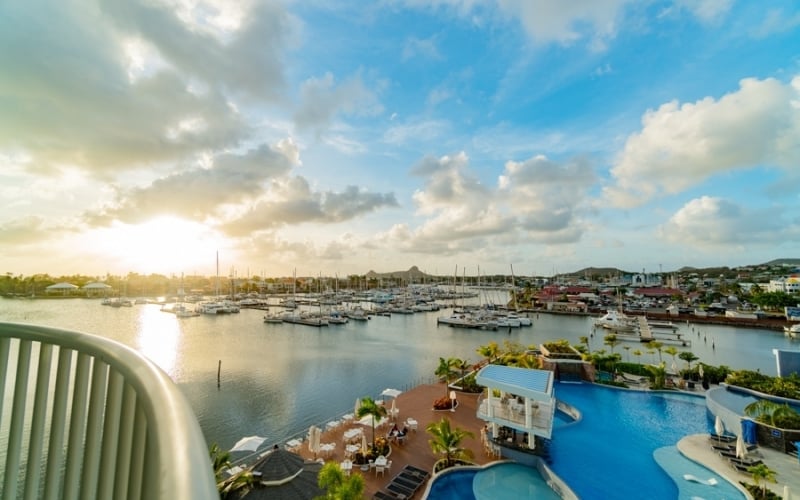 In all my life living in the Caribbean, I am ashamed to say that I have barely scratched the surface when it comes to regional travel. After being unable to decide to where to go to this year, I opted to visit a few Caribbean islands instead. First up was St. Lucia.

As I wanted somewhere relatively close to Castries, I narrowed down the search and chose Harbor Club St. Lucia, which is falls under the Curio Collection by Hilton branding. The hotel was recently opened in early 2018 and is rated 4 out of 5 stars.

Unfortunately, I booked when prices were still a bit high. I paid $246 per night (plus taxes). Prices since dropped to as low as US $150 per night (even well into the height of the summer period) as of publication. There is also a mandatory resort fee of $15 per night plus taxes. Like many other properties, this fee covers what we would hope would be basic amenities including WiFi, bottled water, coffee, and so on, but on the upside, a buffet breakfast is also listed as one of the benefits. I do not disagree with this resort fee though (as I will explain later).

As I will note will all my reviews, I do not have access to credit cards or programs that offer large sign up bonuses, resulting in me having to pay in cash for most of my stays.

The hotel is located in Gros Islet, just 15 minutes north of Castries and the George F. L. Charles airport (SLU). If you are coming directly from the United States or Europe, unfortunately you would have to fly to Hewanorra International Airport (UVF) which is on the southern side of the island. This means an additional 1 hour and 15 minutes of driving. There is the option of paid airport transfer from both airports but a rental is recommended if you really want to explore the island. 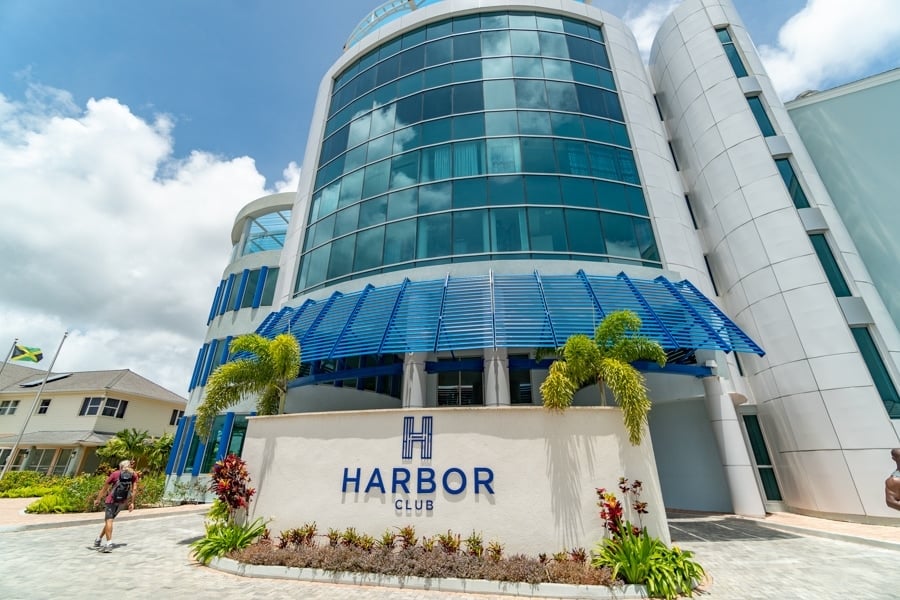 Harbor Club is located on the inner section of the Rodney Bay Marina next to the Castries-Gros Islet highway. Getting around from the hotel is easy regardless of whether you have a car or not. If you prefer not to rent a vehicle, there is public transportation (mini buses) which head as far north as Cap Estate, and southbound towards Castries. From there, you can also link up with other mini buses to take you to other parts of the island. Service was quite regular, both during the day and well into the late evening.

Upon entering, the check in counter is located to the left, while the entrance to their restaurants and pool was immediately ahead, and room elevators being to the right. The lobby was not exceptionally big, but it suited the size of the hotel. They were also able to make the space feel a bit larger with very high ceilings (when you initially walk in) and minimalist architecture. 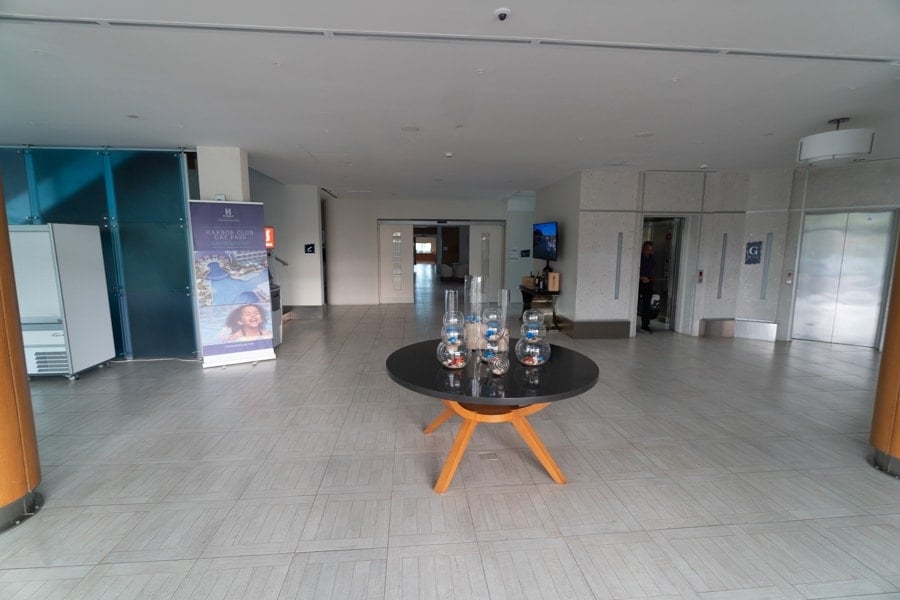 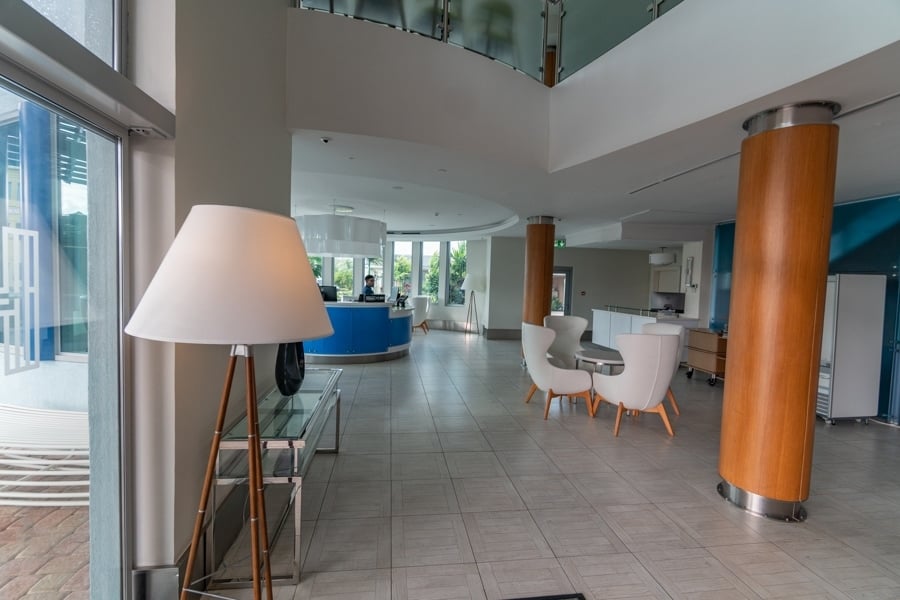 Even though the check in time was officially set for 3 p.m., I decided to head in at 2 p.m. just to see if my room was ready (as I had arrived on the island since 8 a.m.). Thankfully, it was indeed ready and I had my key passes within 5 minutes of confirming my payment details and getting the run down on the facilities offered. Even though the desk agent did not tell me up front, I ended up having my room upgraded at no additional cost (more on that later).

As I was honestly looking for the cheapest option, I went with the “Island View Doubles” room. I wanted a separate bed to dump my clothes on, but King bed alternative would run you the same price. Once I got into my room, I found out that I was actually upgraded to a “Marina Terrace Doubles” room on the 4th floor with a view of the marina (and the highway in the distance), with a balcony. 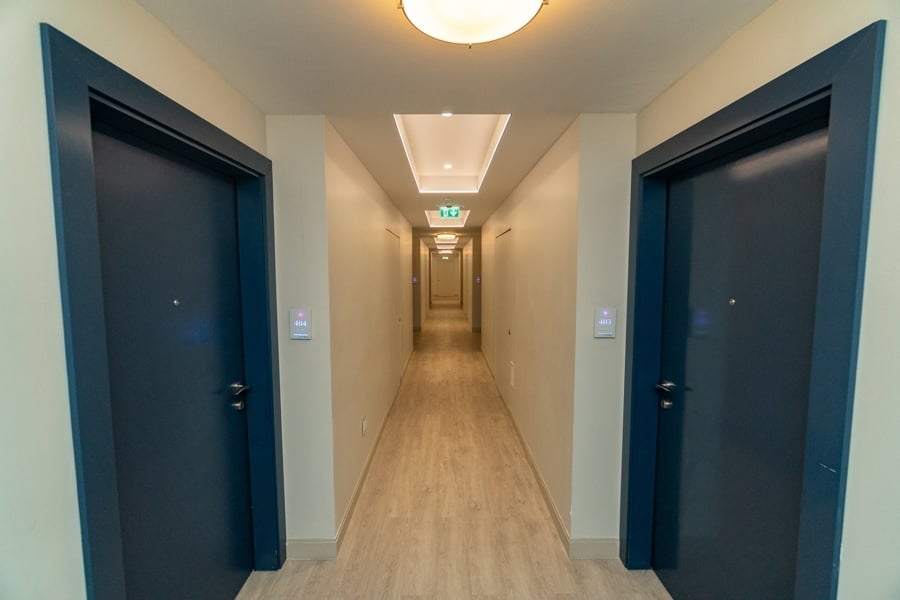 The hotel is L-shaped, with rooms divided into two corridors. Even though key card access is not needed to use the elevators, the room hallways are restricted to guests and staff with key cards. As some floors offer other facilities that are accessible to paying members of the public not staying at the hotel, it would make sense not to have restrictions too early on.

The hallways feature motion sensors which turn on the overhead lights once some walks in. Once some time passes by, the the brighter lights are turned off to save on energy.

Room space is small at just 327 square feet, but ample enough for two people. The rooms follow a similar minimalist fashion used in the lobby, with a combination of white walls and light colored woods. The beds were covered with a white sheet and duvet, along with accompanying pillows, and a grey and brick red patterned cushions. There was also a deep blue foot scarf, matching the headboard. Just above the headboard was a large painting. 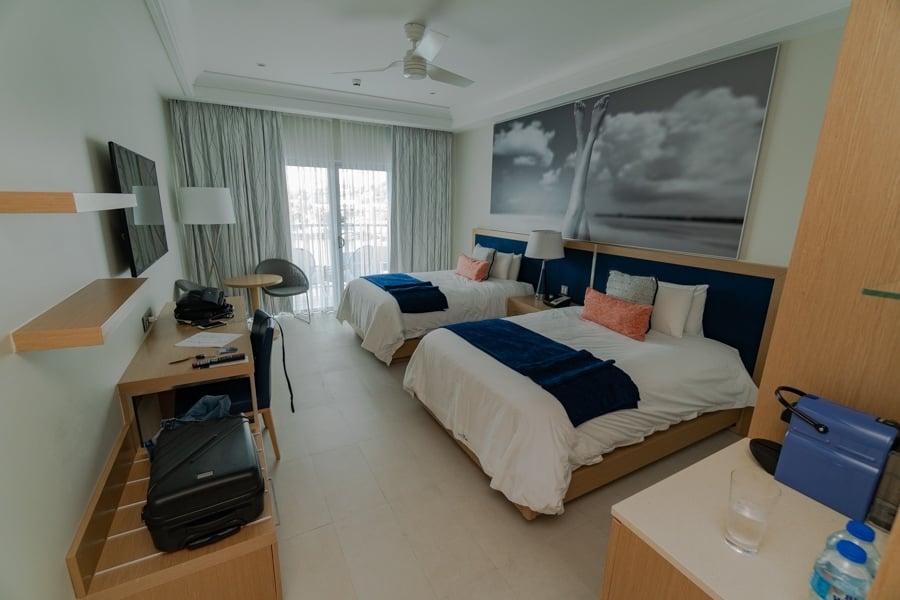 The beds feature motion-activated blue lights which light up once your feet get close to the ground. No more hitting your toes on the sides of your bed! 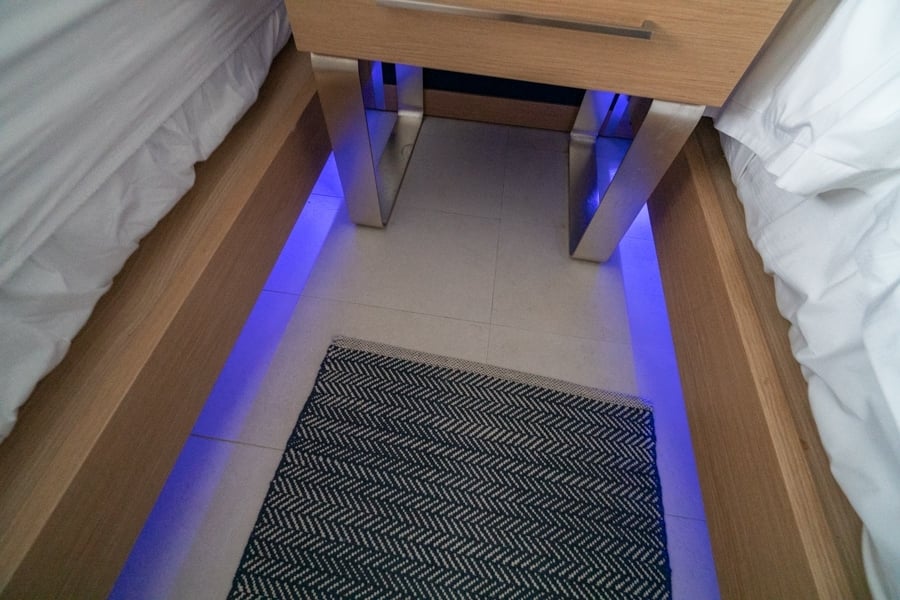 Like many island hotels and resorts, the floor was tiled instead of carpeted. 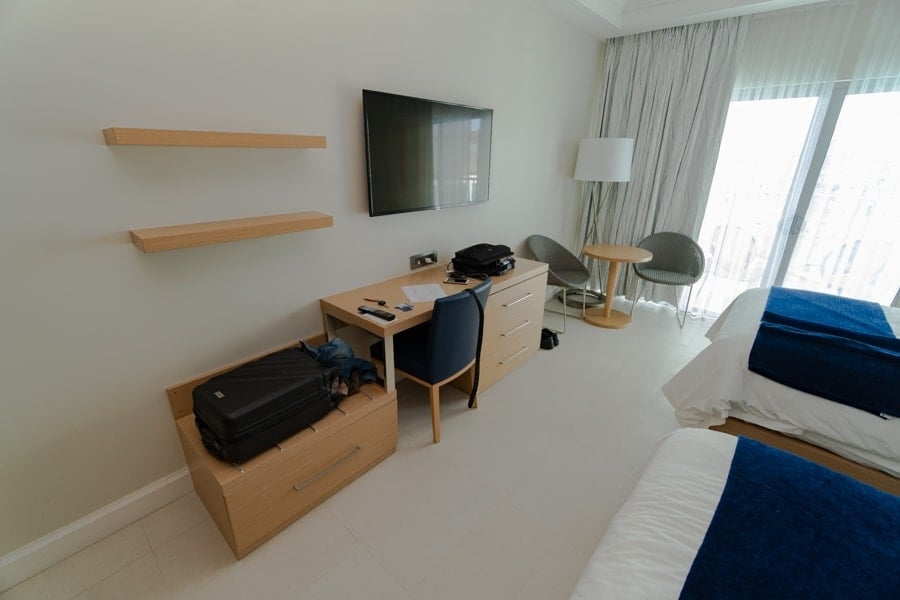 There is also a TV with cable channels (even though I’m not a fan of cable as there is never anything to watch). Internet is also included via hard cable and WiFi, but speeds were slow at around 2Mbps. There is also a small seating area in the corner even though I used the desk to do any laptop work since the power outlets were close by. The outlets are 220 volts, but can accommodate Type A and B plugs (what is seen in North America for example) and Type G plugs (commonly seen in the UK, Ireland and Malaysia). Even though I packed a converter, I did not need to use it as my 110 volt devices plugged right in. There is also a USB charging outlet. 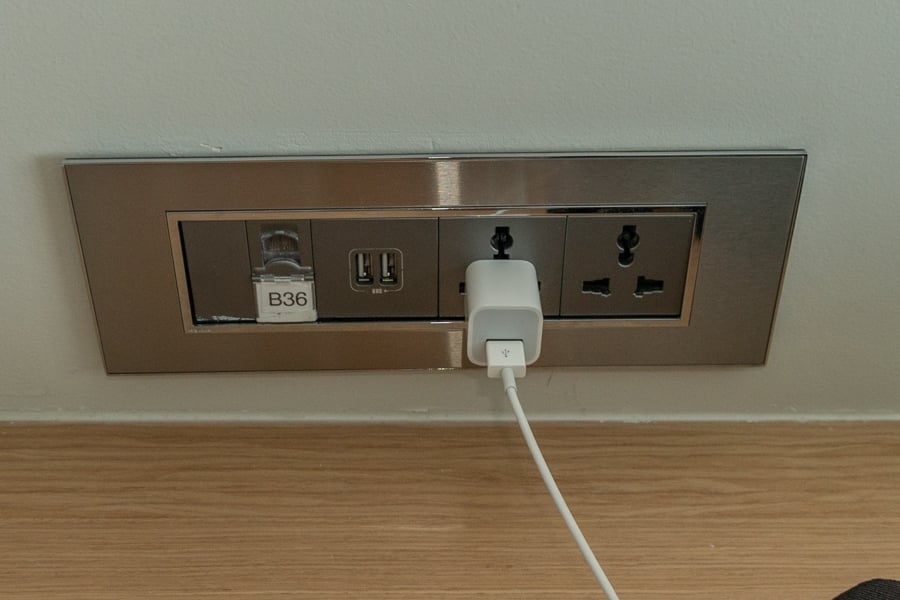 I was not impressed by the fact that no outlets were installed alongside the beds. There was one which the lamp plugged in to, but it also meant moving the table. I honestly could not be bothered, but I would have thought it would be standard given that many of us like to charge our phones near our bed side table. 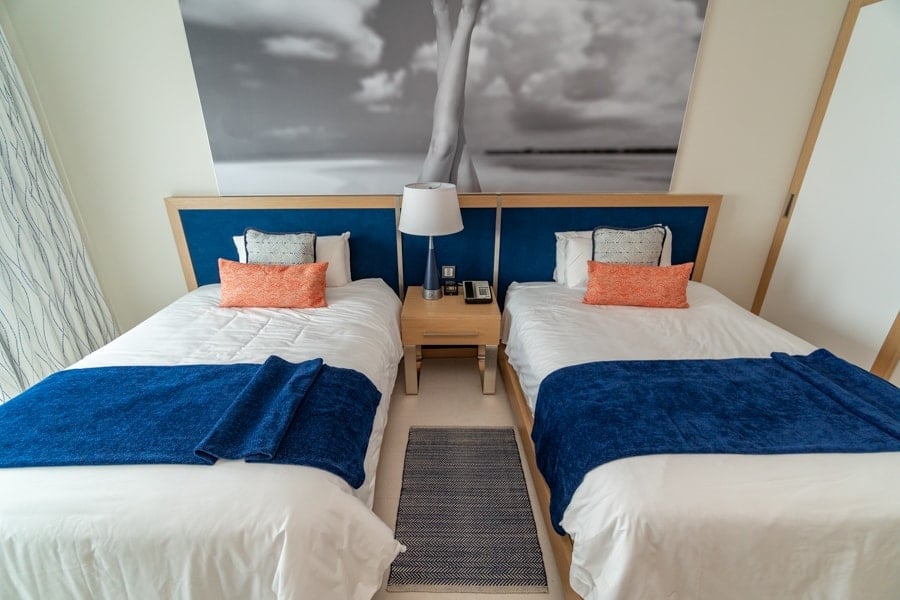 There was sufficient storage space to hang clothes in on the left hand side of the cupboards, along with a few white robes (not pictured). To the right was an ironing table, an iron, a small chest of drawers, and a small safe. 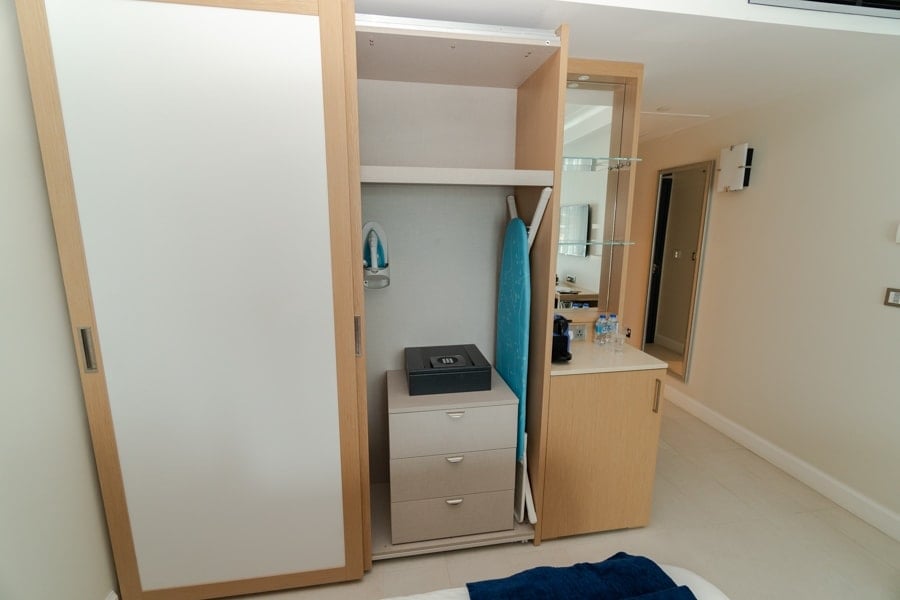 There was also a Nespresso Inissia machine with two coffee pods located in the cupboard just below, along with the accompanying packets of sugar, sweeteners, cup sets and glasses. Small milk packets were stored in the mini fridge along with the two complimentary bottles of water. 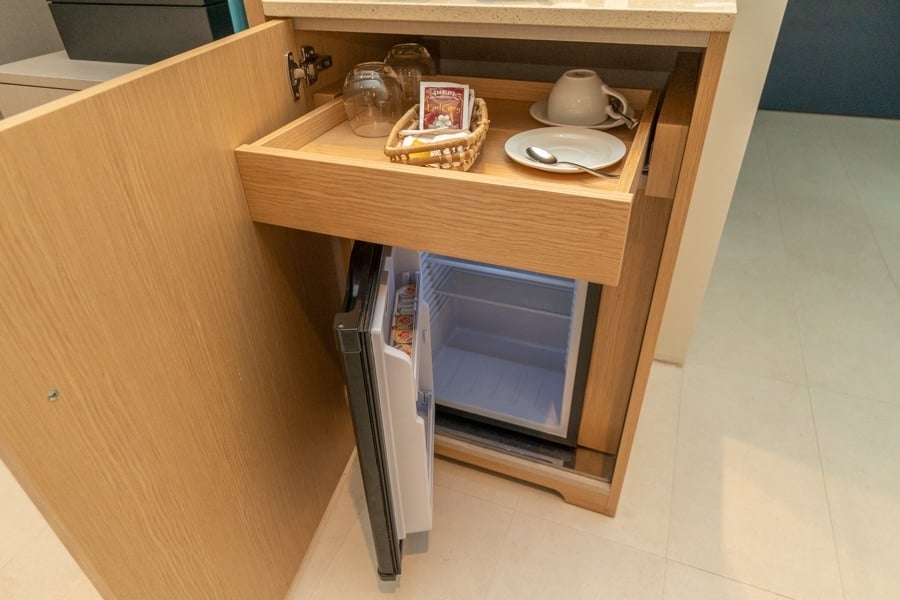 The bathroom was well lit and bright, but features an open concept shower, which I detest. Even though the design does make the space seem bigger, the floor outside gets wet very easily even when you try your best not to get water outside the glass guard. The hotel obviously knows this as well because a towel is bundled like a dam at the entrance to prevent excess spillage. 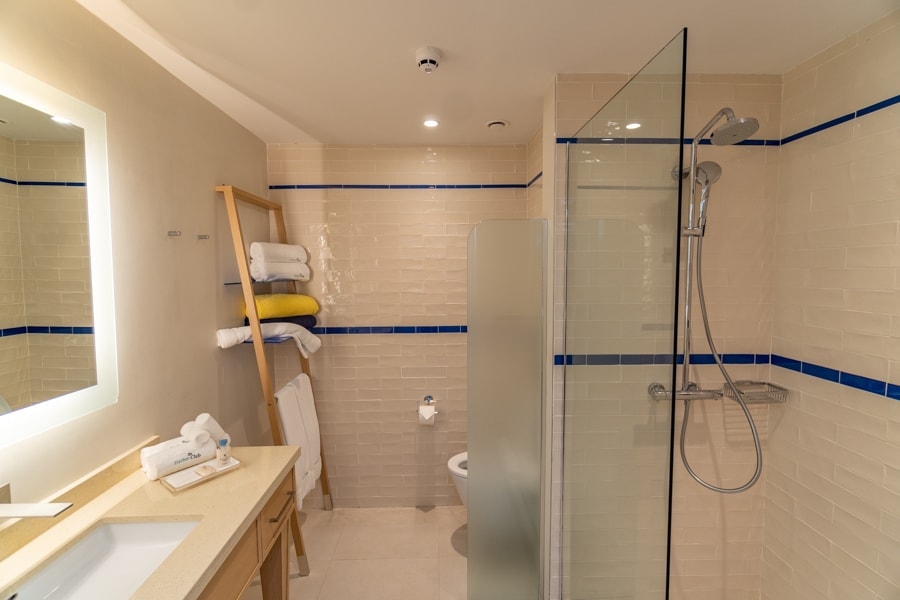 Besides that issue, everything else worked perfectly. Water pressure was good, with sufficient hot water. Soap and shower caps were provided. The Bvlgary body wash doubled as a hair shampoo. I was not too familiar with the Elite Botanica conditioner brand though. 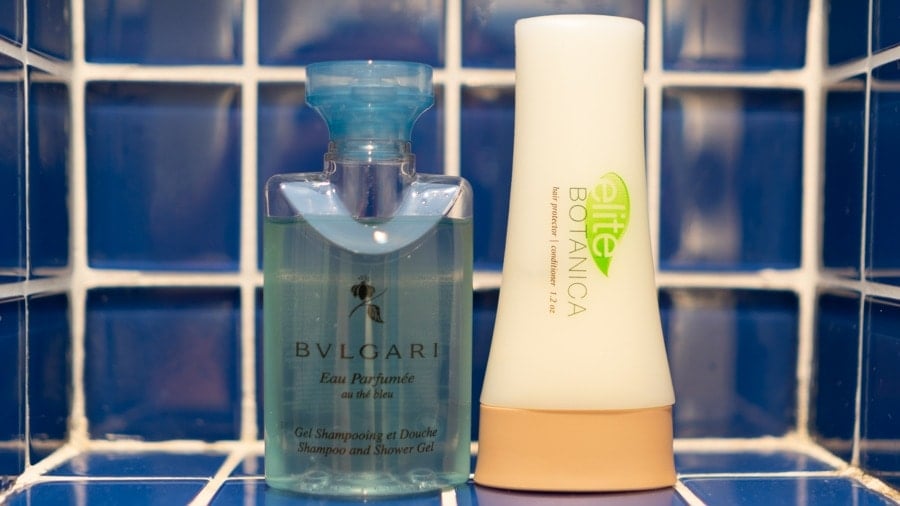 There was quite a bit of counter space, with a very well lit mirror. Hand soap and Bvlgary hand lotion was also included along with a number of hand towels. The hair dryer turns on as soon as you remove the hose assembly from the dock, and there is a little power outlet just above it if you need to plug in your electric shaver. 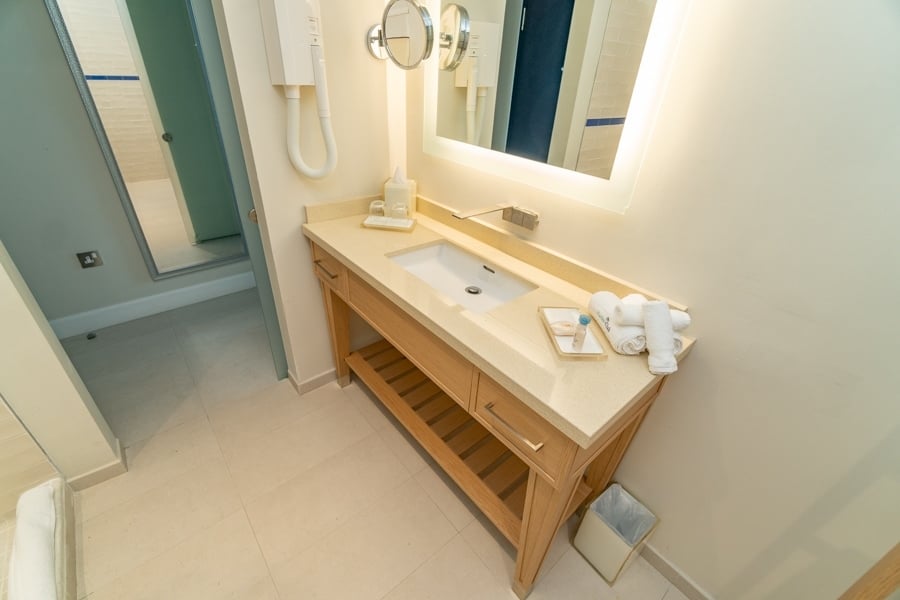 Heading outside, the balcony offers a wonderful view of the immediate marina and Rodney Bay in the distance. Thankfully there was no foul ocean smell, so I had no problems leaving my balcony door open for most of the day. 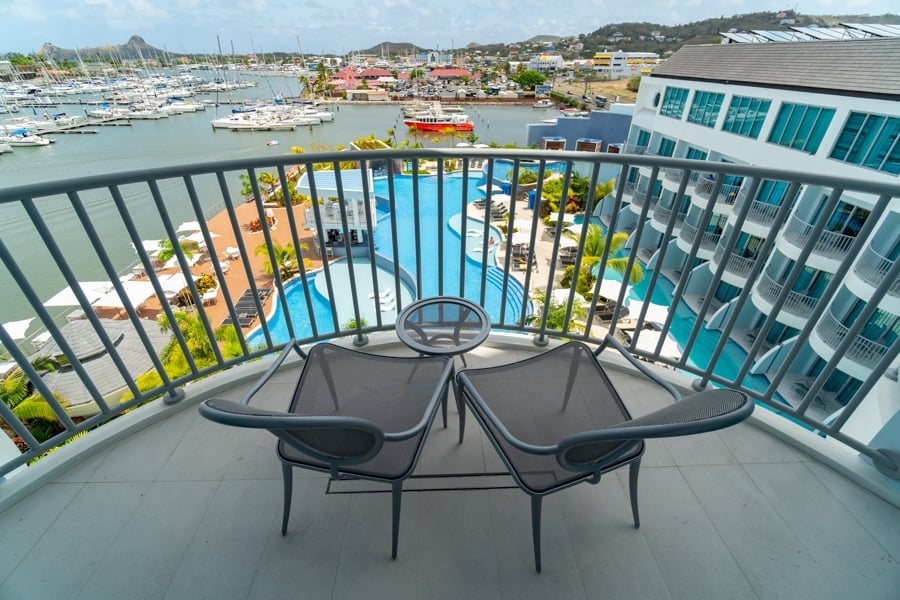 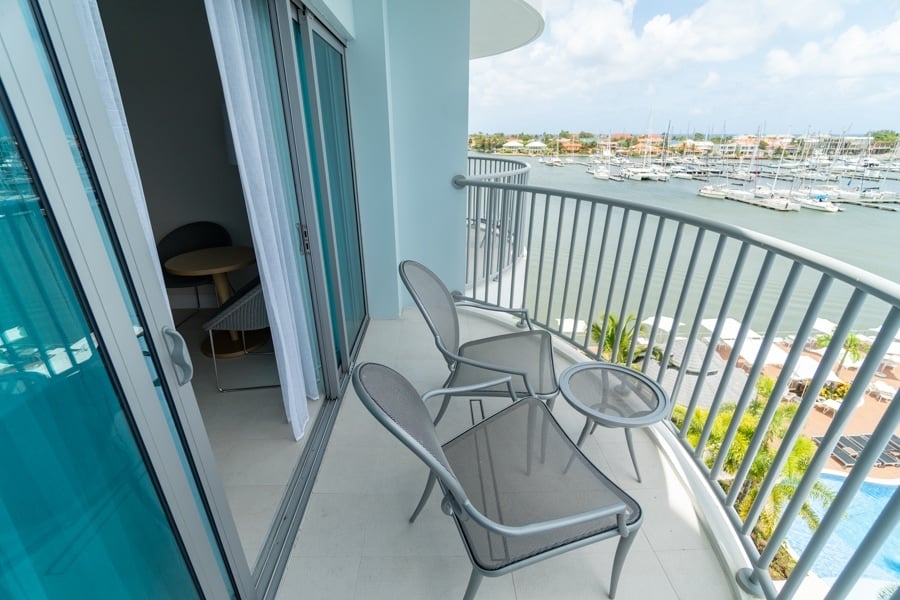 All in all, besides the minor niggles, this was a well appointed room suited for a business travelers. As the hotel does not claim to be a resort, I was more than satisfied with what was offered.

Harbor Club St. Lucia features two restaurants, a sushi bar, pizzeria, and a bakery. If you prefer fine dining, there is Positano on the 6th floor, which has an almost 5 star rating on Google and TripAdvisor. There is also Julia’s which is a bit more casual, serving breakfast, lunch, and dinner. For those paying the resort fee, there is a buffet breakfast with a general assortment of western dishes such as scrambled eggs, omelettes (customized and made on spot), pancakes, sausages, bacon, as well as other items like fruits, yogurt, and cereal.

Even though I hate to see resort fees being slapped on after a price is advertised, the free breakfast made up for some of it.

There are two bars (one inside and the other on the deck next to the pool with a swim-up section). Happy Hour (two for one special) runs from 5-7 p.m., so you could easily get two mixed drinks for around $4-5 each. 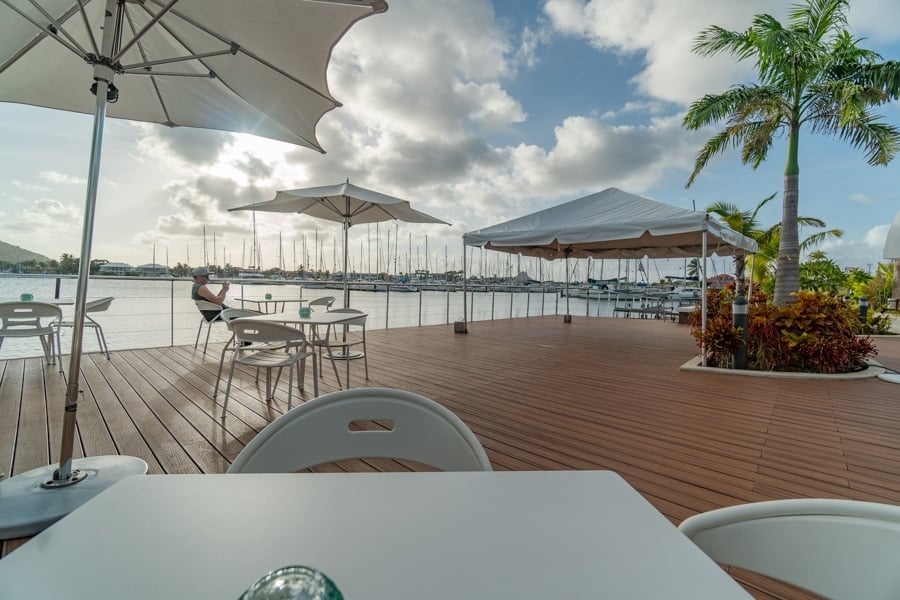 Even though I was more about sampling the island’s food, I did have dinner on the first night as most of the restaurants elsewhere else were closed for Labour Day. Below is a beef lasagna I had for $20 which tasted pretty good. 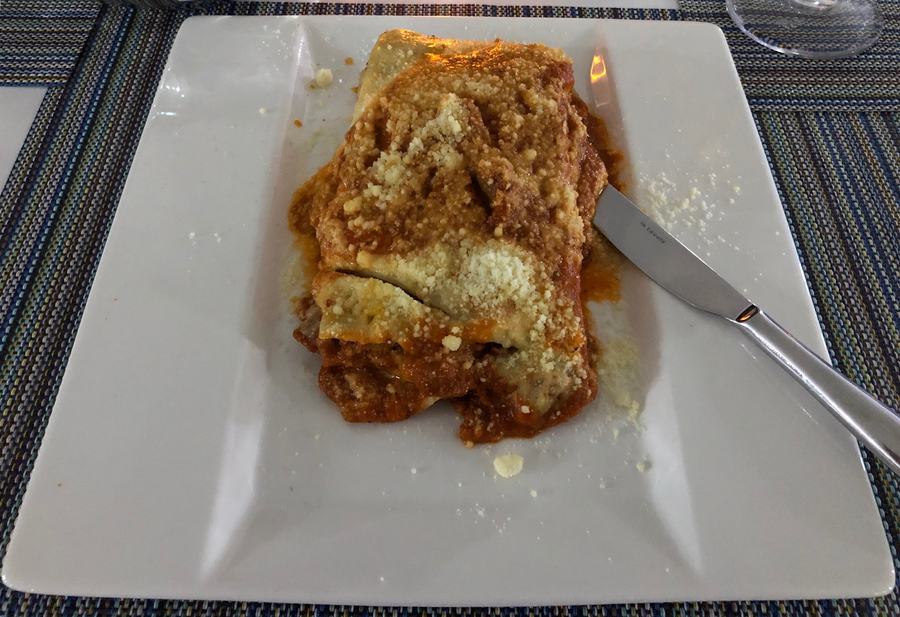 A quick snap of breakfast (trying to do something artsy for Facebook). 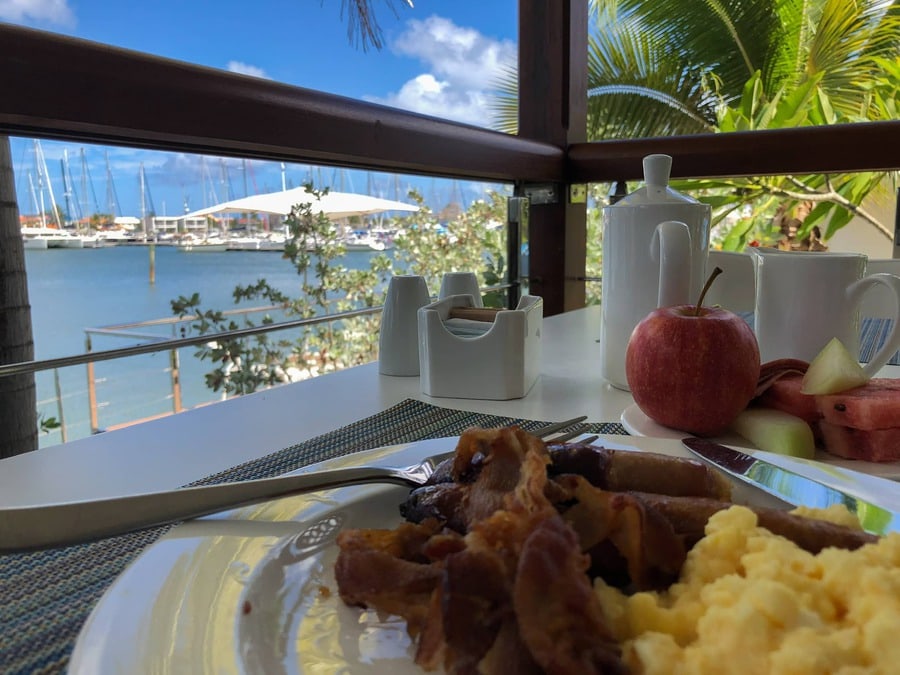 Also a snap of the bakery with prices listed in the local EC dollar currency. 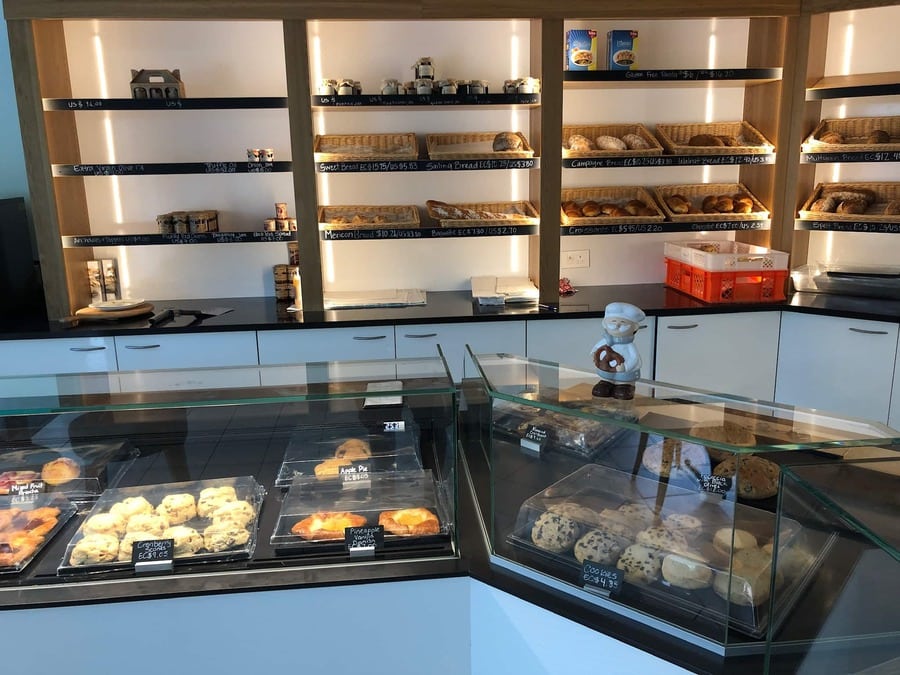 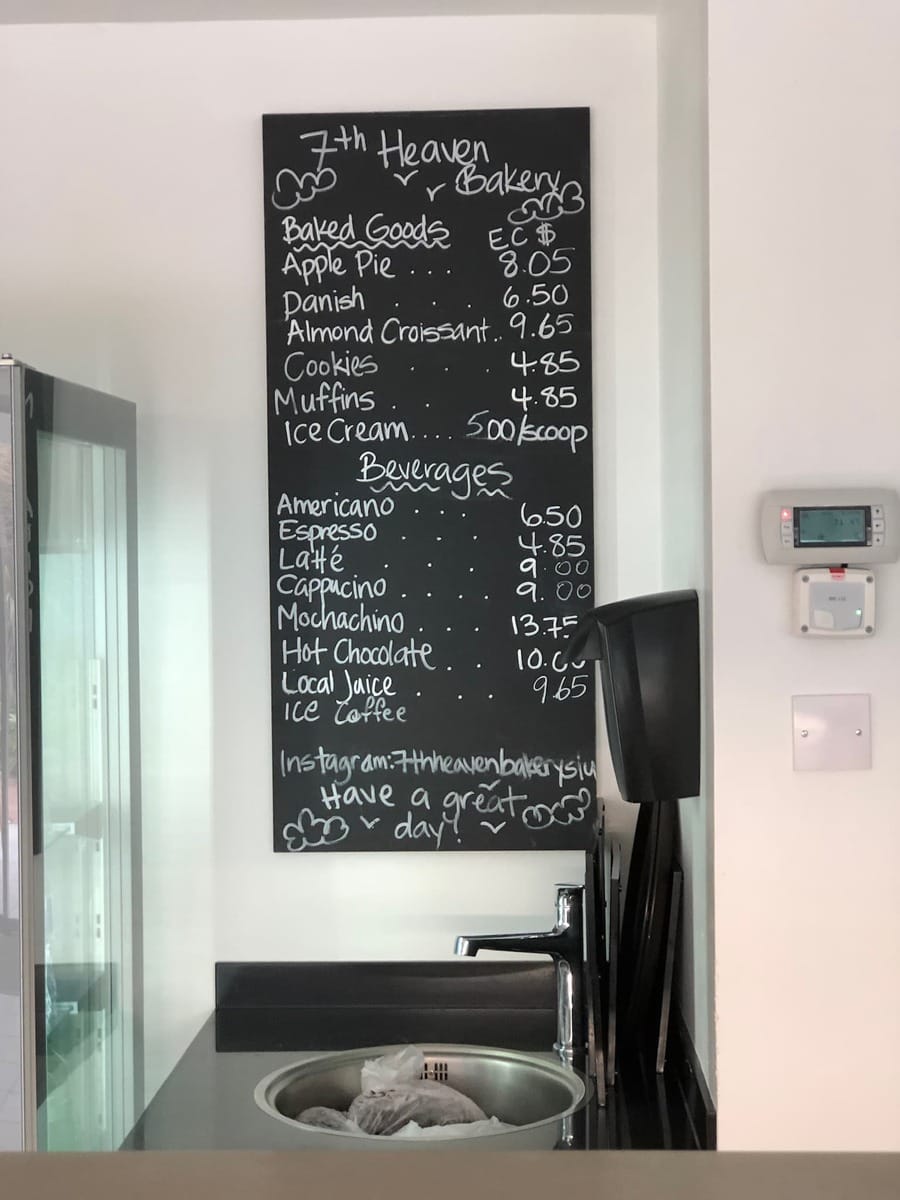 You can view the full menus and prices here.

There are 4 swimming pool (see earlier photo for an overhead shot) with pool towels available if you pay the resort fee mentioned earlier.

One the 4th floor, there is a business center, and a gym and spa on the 2nd floor. Below is a photo of the gym featuring treadmills, free-weights, and basic bench press machines. To the side is a water dispenser and cups. 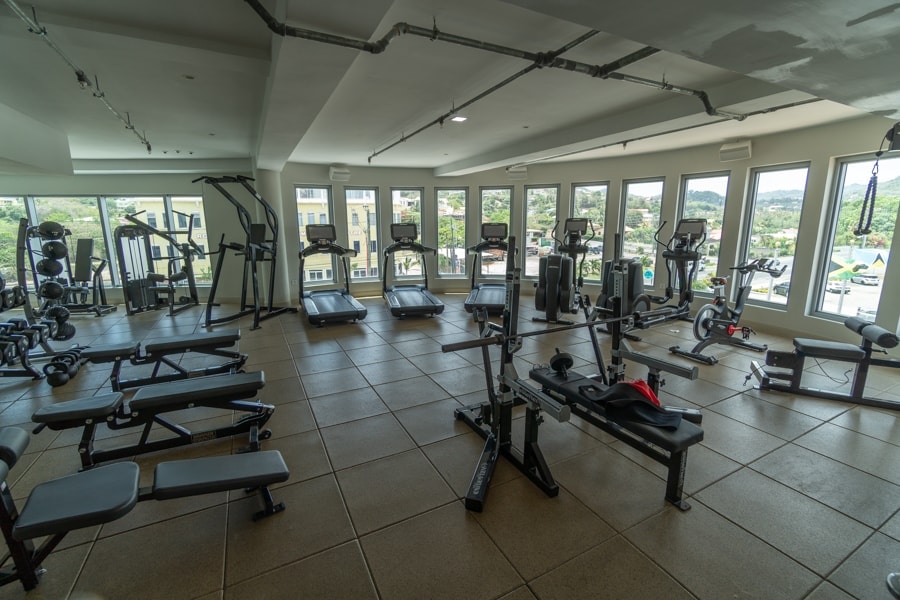 Service on the whole was phenomenal. All staff members I interacted it were very hospitable and were prompt at the check in desk, restaurants and bars. In retrospect, that same attitude seemed to be displayed generally across St. Lucia.

Harbor Club St. Lucia is well positioned as it is close to the main city, as well as much close to a number of other attractions and restaurants. Besides the few small problems, they had a very good hard product. Their customer service also made the experience worth it, but I personally would have preferred to pay less given that it’s not a full fledged resort.

As mentioned above, prices have since dropped drastically falling into a more reasonable price bracket.