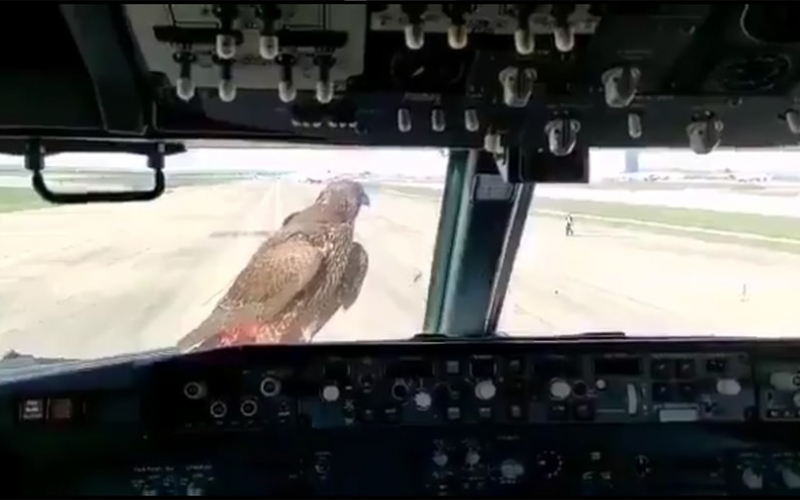 It’s no secret that today’s aircraft take many inspirational cues from our feathered friends, but in most cases, airplanes and bird tend to be a bad combination. Bird strikes near airports have become a common headline, resulting in damage aircraft radomes, fairings, windshields and engines.

Unfortunately in most cases, the birds lose the fight against their much bigger, mechanical derivatives. Researchers have spent years trying to develop different techniques to scare away birds. One team in France even discovered that something as simple as really big googly-eyes proved effective at scaring away certain types of birds.

That’s not always the case though. In the viral video below, ground engineers manage to capture video of a falcon taking a break on the windshield wiper arm of a Boeing 737. With little information, initial speculation led many to believe the bird found its way onto a departing aircraft, however the poster later clarified that this was actually taken at the Ciudad Real International Airport (CQM) in Ciudad Real, Spain during an engine run-up test.

The airport which is used mostly for aircraft maintenance ended up being a temporary resting place for over 60 aircraft as a result of the COVID-19 pandemic. The video was actually taken while they were conducting engine run-up exercises as part of prep work to get the 737 out of storage and back into commercial service.

The Ciudad Real airport has been home to quite a bit of wild life including hawks, falcons and even the occasional rabbits. The airport which opened in 2009 went by different names including Central Airport CR, Don Quijote Airport and South Madrid Airport, but ceased operations just three years later when the management company went into receivership. The airport which was built to accommodate 2 million passengers per year and handle large aircraft including the A380, stayed closed for many years. Eventually the only things arriving and departing were the nearby hawks and falcons.

The airport found a new lease on life after it was sold to CR International Airport SL in 2018, and re-opened in September 2019. Before the pandemic, it many served as a maintenance hub, but saw occasional general aviation flights. However the pandemic resulted in it becoming a small cargo hub, and housed around 60 aircraft as airlines were forced to temporarily downsize their fleets due to the drop in air travel.

Falcons are friends around Spanish airports

Unlike other avian species, falcons are actually used at major airports in Spain to help control other wild life from getting in the way of arriving and departing aircraft. Falcons are used at the Madrid-Barajas (MAD) and Barcelona-El Prat Airport (BCN) airports (among others) to drive other birds away from active runways, preventing unwanted encounters which could prove to be hazardous for aircraft operations.

The presence of bird colonies close to the runways has always represented a serious safety hazard for air traffic. The impact of birds against aircraft or the accidental suction of birds into the engines can be dangerous on landing and take-off. The airport’s bird colonies include mallard ducks, common coots, lesser grebes, magpies, hawks and goshawks.

To combat this threat using natural means, the airport has a wildlife monitoring service based on modern falconry techniques. More than sixty trained falcons patrol on a daily basis to keep the runway air space free of birds. The discouraging effect of these birds of prey has reduced nesting by the species most dangerous to aviation or has forced them to move further away.

The next time you head to one of Spain’s bigger airports, don’t be surprised if you see a few of these flying in the airport’s vicinity.