Storm Ciara Makes For Some Interesting Crosswind Landings And Go-Arounds 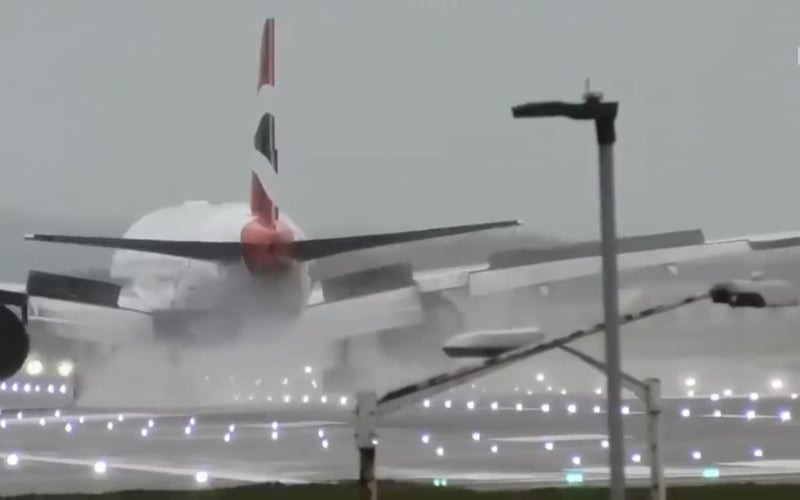 As Storm Ciara continues to make its way across the United Kingdom and on to other parts of Europe, pilots have had their work cut out for them dealing with the strong winds.

As flight cancellations numbered in the hundreds across Europe, a few plane spotters managed to capture footage showing the effects of the storm on arriving and departing aircraft.

Big Jet TV managed to capture over 6 hours of live stream footage at London Heathrow, showing some of the challenges pilots met with over the weekend.

Over in the Netherlands, Cargospotter also captured a number of crosswind landings at Amsterdam Schiphol where pilots had to deal with winds up to 65 knots. Landings like these usually test the true strength of airplanes as seen in the first clip where a Korean Air 777 put a lot of stress on the nose gear as it bounces on first contact.

Over in Birmingham, Topfeyla managed to show us a preview of a few departures, showing the pushing effects of the winds on the aircraft as they make their way down the runway.

In Manchester, AviationUpclose managed to capture 15 go-arounds where winds started to gust up to 75 knots at one point.

The winds also benefited a few flights headed into Heathrow as one British Airways 747-400 (flight BA112) managed to cross from New York to London in just 4 hours and 56 minutes thanks to a very strong jet stream. Flightradar24 notes that the aircraft maintained a consistent cruise speed of Mach 0.86, but thanks to the tailwind, the aircraft got an extra push, resulting in ground speeds as high as 717 knots (just over 800 mph). Luckily for the passengers on board, they were able to make it to their gate just 5 minutes after touching down.

Even though the aircraft itself was not breaking a speed record, the jetstream combination helped them break the transatlantic subsonic record which was previously held by a Norwegian 787 which made a similar trip from New York to London Gatwick, completing the then trip in 5 hours and 13 minutes.

As always, it’s well worth noting that pilots operating in conditions like these, do so within safe limits. As evidenced by many of the go-arounds and diversions, there are limits even for a crosswind landing or takeoff. It’s always disheartening to see the headlines describe crosswind landings and go-arounds as “terrifying”, “scary” or “insane”, but the pilots in these videos surely earned their money!