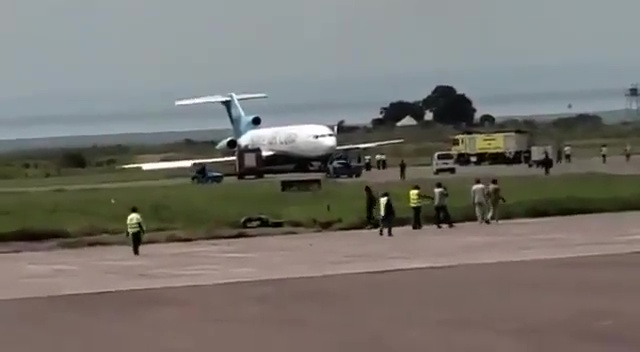 On March 21, 2020, a Serve Air Cargo Boeing 727-200 freighter departed from (FIH), Kinshasa, Democratic Republic of the Congo, when it was forced to turn back after experiencing a hydraulic problem shortly after takeoff.

The crew members were able to safely land, clearing the runway before coming to a stop. Just after the pilots vacated the aircraft via the emergency slides, the aircraft started to roll back. The 727F crossed the runway, with the nose gear momentarily going airborne as the aircraft planted itself into a grassy soft spot.

It is unclear why the freighter was not chocked after stopping, but based on the limited data, it sounds as if sufficient time had passed by for ground crew to secure the aircraft. At least it appears that this 727 can live to tell the tale.

On 21/03, A 727 cargo of #ServeAir (#DRC) reportedly performed an emerg. ldg @ N'Djiri due to hydraulic issues few mins after T.O. After landing,the crew evacuated through an evac slide but i wonder if the Captain forgot to activate the #ParkingBrake! @AviationSafety #SafetyFirst pic.twitter.com/YEQlpRBRPo