Runaway TAAG 777 rolls into grassy area at Porto Airport, knocking down light pole in the process 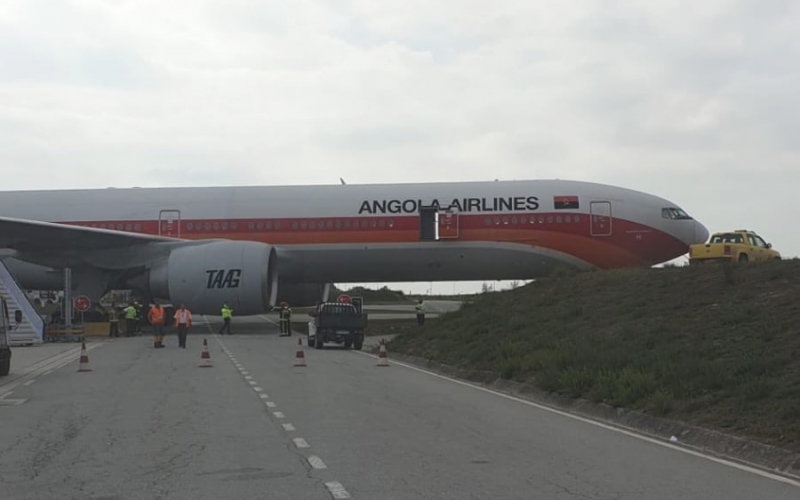 Earlier this morning, video was captured showing a TAAG Angola Airlines Boeing 777-300ER rolling away from its parked location, into a grassy area at Porto Airport (OPO) in Portugal.

According to Jornal de Notícias, the triple 7 (registered D2-TEH) arrived in Porto as DT654 at 5:43 a.m. local time after making its way from Luanda (LAD) in Angola. As it was a larger aircraft, it was customary to park it in the cargo area of the airport as it would not be making the return flight until 10 p.m. The Portuguese newspaper reports that around 9 a.m. local time, the aircraft started to roll free on its own accord.

The runaway aircraft, with its tow bar still attached, slowly rolled down the taxiway and veered off into one of the grassy areas. The 777’s right wing also came into contact with a light pole and knocked it down before coming to a stop just a second later.

Airport sources told JN that “someone forgot to chock the wheels of the plane, which caused it to slip into a landing zone.”

At the time of the incident, there were no crew members or ground officials on board the aircraft.

Both TAAG Angola and ANA Aeroportos de Portugal were able to confirm the above events and said and investigation is now in progress to determine what happened.

As at the time of publication, after speaking to one of the airline’s agents, the return flight to Luanda (DT655) was still scheduled for service, but they were unable to comment on the condition of the aircraft.

ANA Aeroportos de Portugal also reports that the incident did not affect operations at the airport itself otherwise.