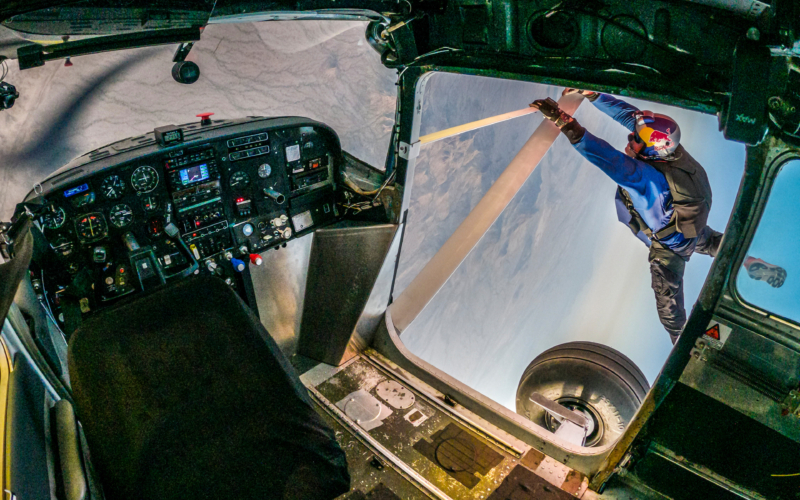 The Federal Aviation Administration (FAA) has launched a formal investigation into the Red Bull Plane Swap event after one of the pilots was unsuccessful in landing their aircraft.

As part of the Red Bull Plane Swap, stunt pilots and cousins Luke Aikins and Andy Farrington took two Cessna 182 Skylanes high over the Arizona desert. They then jumped out in an attempt to switch places mid-air. Aikins was able to enter the other aircraft and land it safely, but Farrington was not so lucky as the aircraft he was supposed to take over entered a spin, making it impossible for him to recover. He deployed his parachute and landed safely. Unfortunately the same could not be said about the aircraft.

According to Red Bull, the two experimental aircraft were specially configured so that once the pilots were ready to jump, they would engage their custom autopilot system to keep the aircraft on the steep descent path. The engines were shut off and the pilots jumped to begin their attempts to recover their respective partner’s aircraft. Both airplanes were also fitted with speed brakes to maintain a reasonable speed on descent, along with additional handle bars  to make it easier for the pilots to grab on to for recovery. Around 2,000 feet, the pilots then attempted to gain entry into their assigned airplanes to bring it to a safe landing.

The FAA has now stepped in, saying that the incident will be investigated, and even mentioned that the organizers were not granted permission in the first place to conduct said event. The pilots initially requested an exemption from the following regulation citing that the event was being done as part of a public interest program to promote aviation “in science, technology, engineering, and math (STEM) and encourage students to seek a career in STEM.”

However, the request was rejected, and the FAA said that it “would not be in the public interest and cannot find that the proposed operation would not adversely affect safety.”

Aikins and Farrington are no strangers to the sky diving and piloting scene. Aikins entered the event with 21,000 jumps and 8,750 commercial flying hours and Farrington had 27,000 jumps and 6,000 commercial flying hours to his name. They had also performed more than 5,000 jumps together since their teenage years. Leading into the attempt, Aikins and Farrington had spent 12 months preparing tge experimental Cessna 182s which they would pilot for the feat. Farrington said that even though the systems activated as expected on his aircraft, the aircraft was physically damaged which resulted in it entering the spin and ultimately crashing.

Even though spectators were not invited to minimize any chance of injury, this is the second time the FAA has to investigate a publicity stunt in recent times. A few months ago, YouTuber Trevor Jacob came under fire for intentionally crashing his airplane in an attempt to promote his channel.