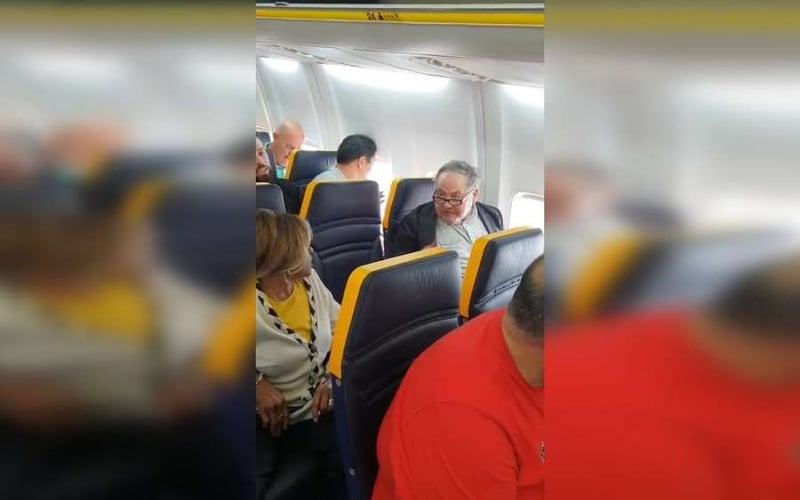 Ryanair is once again making headlines, this time after video surfaced showing a white male throwing racial insults towards another black female seated near him.

The incident took place on Ryanair flight 9015 with service from Barcelona–El Prat Airport, Spain to London Stansted Airport, UK on October 18. David Lawrence, one of the passengers on the flight, filmed the incident while the aircraft was still at the gate in Barcelona.

The video depicts a disgruntled male passenger expressing his frustration for having to be seated next to a black female. As passengers tried to calm him down, he asked the flight attendants to have someone seated next to him, while throwing a barrage of insults towards the lady.

He yelled, “I tell you what, I hope someone sits there because I don’t want to sit next to your ugly face, your ugly f****** face.”

As multiple passengers tried to alleviate the situation, a cabin crew member asked the female passenger if she wanted to be seated elsewhere. When she declined, the man once again shouted at her, saying, “I’ll tell you this, if you don’t go to another seat, I’ll push you to another seat.”

As she expressed her frustration towards him, he continued by saying, “don’t talk to me in a f****** foreign language, you stupid, ugly cow.”

A passenger in the row behind intervened, telling the man that he needed to keep his voice down and that what he was saying was not necessary. The disgruntled man replied by saying, “I will carry on as long as I can with this ugly, black bastard.”

At this point, the female passenger decided to move and join her daughter in another seat. The flight attendant then spoke to him again and asked whether he would remain calm, and said that he needed to review the situation with his supervisor. Passengers were also heard calling for the man’s removal.

At this point, the video came to an end, but according to Lawrence, the man was allowed to stay on board for the flight.

The video caused quite a stir on various social media outlets, with many commenters questioning the decision by the crew members to allow the irate passenger to stay on board. The incident has drawn so much attention, that even British and Scottish Members of Parliament have expressed their dissatisfaction with the airline’s handling of the situation.

What’s @Ryanair had to say about this? https://t.co/XrHKNZ4qo4

He should have been removed from the flight and handed over to the police. We assume the aircraft was in the UK. If it was, he definitely committed criminal offences. I fully expect @Ryanair to confirm the situation if In fact it was their flight? https://t.co/ORfww9ZiPg

This really is appalling @Ryanair . You will know the identity of the man and the level of training given to your staff! https://t.co/DyMleXQ0vD

Just watched the shocking footage on a @Ryanair aircraft, utterly disgusting. Racist male passenger should have been put off flight before it departed. Flight attendant incapable of responding appropriately. However well done to passenger with black t-shirt that intervened #hero

Lawrence went on to say that at no point during the altercation, was the man asked to switch seats or leave the aircraft. At the end of the flight, Lawrence was advised by the pilots to file a formal complaint.

Ryanair has yet to issue a statement about the matter.