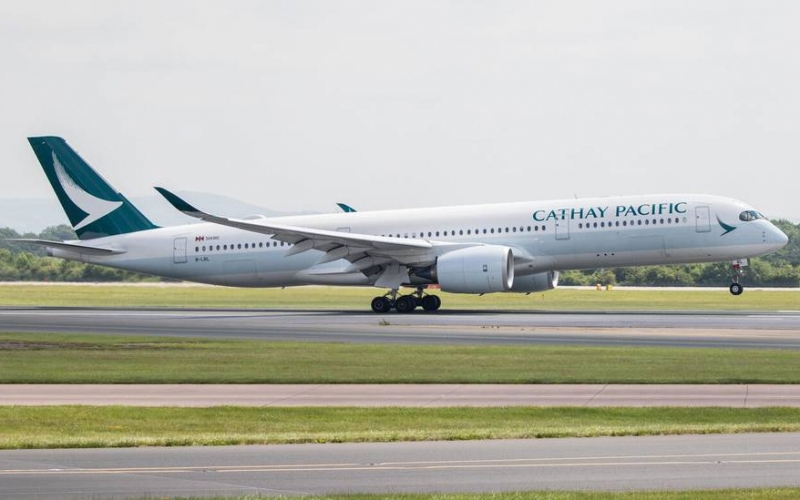 Time and time again, we hear about numerous cases of “influencers” trying to use their social media fame to try to score discounted or even free meals, accommodations and flights. As noted in one article, more and more people are taking advantage of the term to score free hotel nights in exchange for publicity to very small audiences.

This story begins with yet another social media”influencer” (whose name we have since redacted by request), who booked a round trip ticket from Taiwan to New York with Cathay Pacific. She explained to Elliott Advocacy that she initially booked the ticket in their Premium Economy cabin, and then filled out an online form requesting an upgrade to business class. She then claimed to have received a reply from the airline, confirming that she was eligible for an upgrade only if there was available space on the day of the flight.

Here is a copy of the email allegedly sent to her from Cathay Pacific. Even though she did not explain to Elliott Advocacy that she was a social media influencer, from the email, it’s clear that whoever sent the message was aware of her social presence. More on that later. 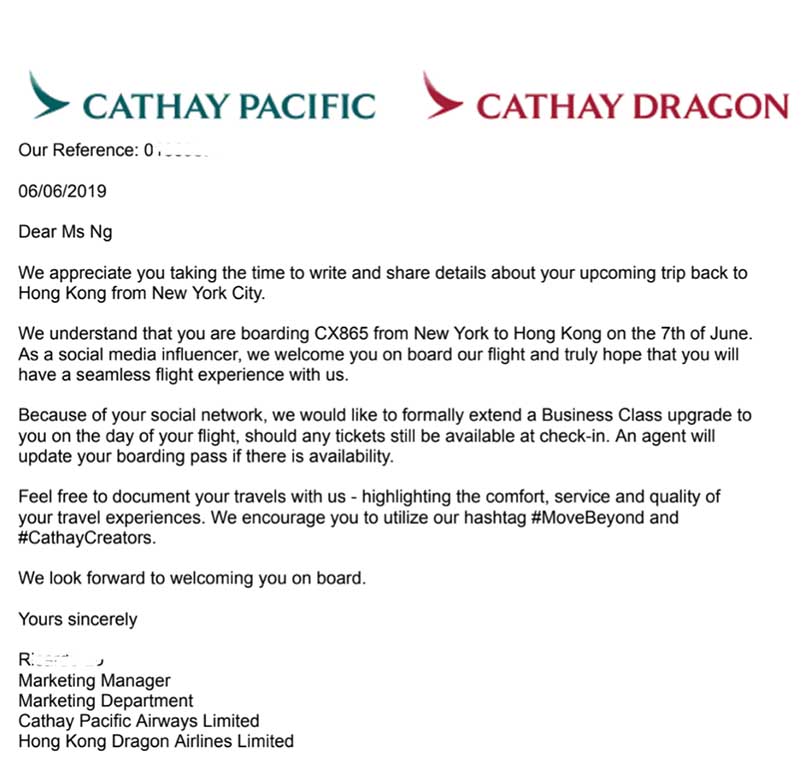 When she checked in at the airport in Taiwan, she showed the agent a copy of the printed email confirming her eligibility, but was turned down on the basis that they were unaware of any such request, and that they would be unable to upgrade her due to the long flight time. The influencer was able to take her trip to New York, but flew in Premium Economy as initially booked. Little did she know, the Cathay agents took note of the incident.

Canceled and barred for life

On her return trip, she once again tried her luck with the letter. This time, instead of simply being turned down for the upgrade, the check in agent took the letter to her supervisor.

“[The supervisor] proceeded to give me a ‘refusal of carriage letter’ 30 minutes later,” she recalled. “He stated that security said that Cathay Pacific did not send that email and that I had committed fraud.”

Ng tried to reason with the supervisor, but realized the decision was final, and had to book a separate ticket with a different airline to get back home.

Ng reached out to both Cathay Pacific and Swire (the airline’s parent company) via email, explaining her situation. She hoped that the whole situation could have been cleared up, and expected that the airline would reimburse her for the extra $1,400 that she had to spend on the one way ticket back to Taiwan when she was denied boarding at JFK.

In the case that you are certain of the authenticity of your emails, please facilitate our further investigation by sending us:

2. The “.eml” document of the two upgrade emails you received from us. You may follow the steps as detailed in the attached document;

3.  Any other supporting information. (Cathay Pacific)

Instead of providing the requested data, she responded by saying that she did not see the “the relevance of this request” and that further responses should be sent through her legal advisor.

Here’s where it gets interesting. In response to the passenger’s legal threat, Cathay pointed out that she used two different emails to try to score an upgrade, but noted that the same reference number was used in both cases. They also noted that the Marketing Manager did not send those emails, and even after a thorough scan of their email system, they were unable to locate any outbound messages to her in reference her to offer for an upgrade.

We verified with R**** and understand that he did not send any such emails to you. We also cross-checked our email systems and confirmed no emails were delivered to you on the date and time as indicated in your emails.

To the best of our knowledge with the information on hand, we concluded that the emails you presented for upgrades were not issued by Cathay Pacific Airways. The decision was made to refuse the carriage of you given your repeated attempts to present a fraudulent document for upgrading on our flights.

At this point it was clear that Cathay Pacific was confident with the results of their investigation, and gladly recommended that her legal team contact theirs.

Cathay was still nice enough to refund her unused portion of her ticket, but refused to reimburse her for the addition cost incurred as a result of the inconvenience. According to their General Conditions for Carriage for Passengers and Baggage, Section 8.2 states that:

If, due to your behaviour, conduct, mental or physical condition, we have, in the exercise of our reasonable discretion, refused to carry you, or removed you en route, then we may cancel the remaining unused portion of your Ticket, and you will not be entitled to further carriage or to a refund either in respect of the sector that was the subject of the refusal of carriage or removal, or any subsequent sectors covered by the Ticket. We will not be liable for any consequential loss or damage alleged due to any such refusal to carry or removal en route.

Even after the decision was finalized, she was still insistent that her emails were legitimate, and is currently trying hire legal counsel to try to set the record straight.

Based on the evidence presented, the social media star in question was unable to substantiate her claim and got called out for it. Some airlines may have simply overlooked the request, but it’s clear that Cathay would not let this slip, investigating the matter from start to finish.

Assuming on the other hand that the email was indeed genuine, if I were in her position, I would have confirmed with the airline beforehand via telephone whether the email was legitimate or not.