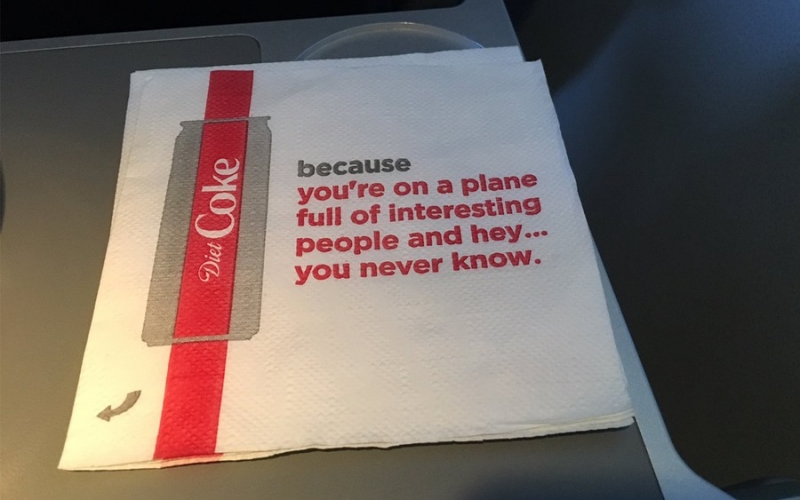 American Airlines and United can take a back seat as Delta has taken the wheel as they’ve some how managed to piss off parts of the internet with their Coca-Cola napkins.

As part of a new promotion, Delta and Coca-Cola teamed up by serving drinks with napkins with the following text printed on them: “Because you’re on a plane with interesting people and hey … you never know.”

On the back, there are underlined spaces to write your name and number in, so that you can give it to your airplane crush at the end or during the flight.

To the side of those spaces are some “instructions”. It says, “be a little old school. Write down your number & give it to your plane crush. You never know…”

The campaign did not exact go as planned, with many voicing their opinion about the situation, generally describing the napkins as “creepy”.

Hey @Delta and @CocaCola These napkins are creepy AF. Pretty sure no one appreciated unsolicited phone numbers in the ‘good old days’ and they sure as heck don’t want the number of someone who has been gawking at them on a plane for hours today. Not a good look. pic.twitter.com/PJAiurFRMh

Both Delta and Coca-Cola have issued apologies to the media, saying that the napkins will be removed from their flights due to the negative publicity being attracted. “We rotate Coke products regularly as part of our brand partnership, but missed the mark with this one”, said a Delta representative while Coca-Cola said, “we sincerely apologize to anyone we may have offended. We worked with our partners at Delta to begin removing the napkins last month and are replacing them with other designs.”

Admittedly, there were a few negative comments about the “suggestive” napkin, but as news about the airline’s decision to pull the napkins spread across the web, the majority of social media comments swayed in favour of the campaign. Many even questioned the negative comments, asking why the napkins were considered creepy but dating apps like Tinder were not. Some even went as far as saying that Coke’s campaign worked wonders by driving discussions online, bringing more attention to the two brands.

Hey @Delta. Please don’t apologize for the napkin. Those calling the napkin creepy are the same people that decide the hotness of their next date by swiping left or right on their iPhone. Now THAT is creepy! Besides, I need that napkin for my Diet Coke. My plane crush is 🥤.

It's actually sad that @delta and @CocaCola were forced to apologize because people are more comfortable talking on Twitter than in real life. 🤦‍♀️🤷‍♀️

@Delta @CocaCola I friggin LOVE these napkins. How anybody can find this genuinely creepy is beyond me. I once met a guy on a plane and we ended up in a 6 month relationship…and it all started with a smile and a…number…on an airplane napkin #Delta #CocaCola pic.twitter.com/3Wg7YMjelp

Of course there were the few who also took the opportunity to crack a good joke out of the situation.

Sending a girl your number on a Delta Napkin sounds like a good idea until she finds out you sent it from a middle seat in the back of the plane. pic.twitter.com/VGHakDxP4X

Delta and Coke should absolutely be ashamed of this napkin. Telling passengers that their planes are full of interesting people? Bald faced lie. pic.twitter.com/FUdfCsYFRR

Did you think the napkin campaign was offensive?