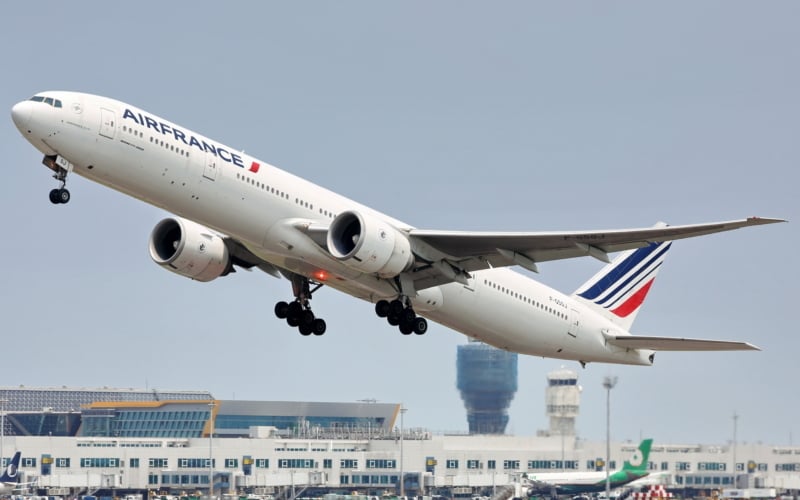 On April 5, 2022, pilots of an Air France Boeing 777 flying into Paris Charles de Gaulle reported difficulty controlling the aircraft when it was on final approach for runway 26 Left.

Air France Flight AF11 was a scheduled service from New York to Paris, and was operated by a Boeing 777-300ER (registered F-GSQJ). When the aircraft was on final, the co-pilot flying the aircraft disconnected the autopilot at 1,670 feet and continued following the guidance of the flight directors. Even though the aircraft was within the margins for the approach, the co-pilot expressed concern with aircraft’s bank angle and performed a go-around.

During the go-around, one of the pilots were heard expressing audible distress via the tower ATC frequency, saying “Stop! Stop!” and “Stop it! Stop it!”, and the Autopilot Disconnect alarm could be heard in the background. The pilots managed to get the aircraft under control and executed a missed approach, completing a safe landing on their second attempt.

Initially, all eyes were on the functionality of the aircraft type after another Boeing 777-300ER operating for Emirates experienced autopilot issues as it departed Dubai destined for Washington Dulles on December 19, 2021. In that scenario, it was reported that flight EK231 struggled to climb, passing a residential area at just 175 feet beyond the end of the runway. Even though an initial report was released for that incident, no conclusive details have come to light. Results will come to light once a final report is published.

France’s Bureau d’Enquêtes et d’Analyses pour la Sécurité de l’Aviation civile (BEA) has since released an initial report outlining the events during AF11’s approach. The finding suggest that contrary to initial speculation, the co-pilot misjudged the intensity of the left bank angle and initiated a go-around. Telemetry shows that in the span of one minute, the aircraft showed opposing inputs from both pilots during the go-around, to the point where the controls desynchronized twice. Here is an excerpt from the report outlining the timeline of events.

The crew analysed the situation without perceiving the antagonistic inputs made on the controls and the desynchronizations of the control channels. They considered that they could use the AP again and carry out a new approach. The co-pilot became the PF again. The captain informed the controller that there had been a problem on the flight controls and asked to join the final for runway 27R. The approach and landing took place without further incident.

The report also explains that the audible warnings and radio transmission were as a result of the pilot accidentally engaging the push-to-talk and autopilot disconnect buttons multiple times during the go-around. Column desynchronization occurs on the 777 in cases where there is enough opposing force applied to the respective controls. This was specifically implemented so that the aircraft could be safely controlled if one of the control columns becomes stuck. When both controls are brought within the accepted tolerances, the columns re-link. 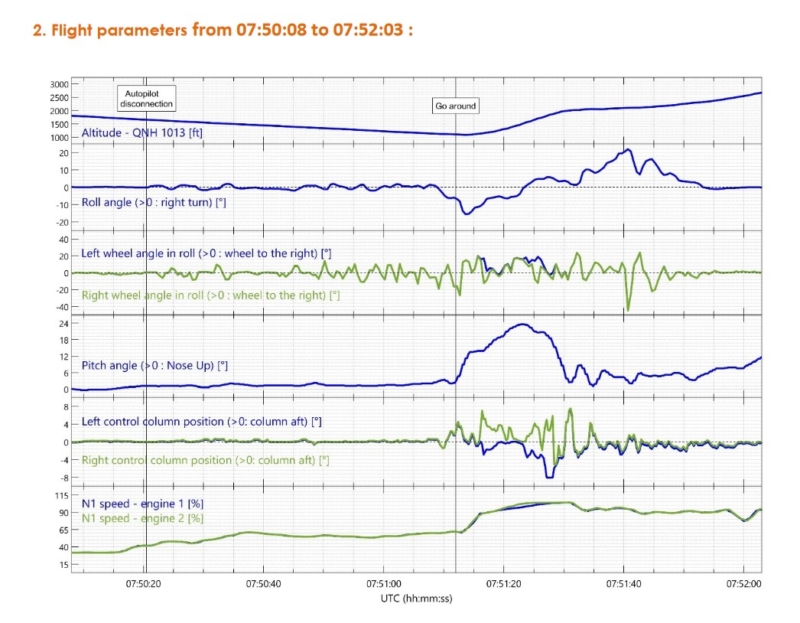 The BEA said they found no fault with the aircraft’s systems or controls, and continues to validate the results of its findings. They also plan to run simulations to reproduce the forces applied to the
controls to understand the relationship between these forces and the movements of the controls. The report does not speak about crew resource management issues, but from the above line chart, it’s clear that there was some confusion in the flight deck as both pilots tried to control the aircraft simultaneously during the go-around.

It appears that the captain did not communicate that he had taken command of the aircraft, resulting in both pilots unintentionally wrestling each other for control of the aircraft. Even though judgement can’t be passed until the final report is published, the incident somewhat reminds me of the Air France 447 crash. In that case the pilots were trying to bring the aircraft out of a stall, but failed to do so because they were applying opposing inputs, resulting in a canceling effect.