Aeromexico Connect E190 veered off runway and burst into flames 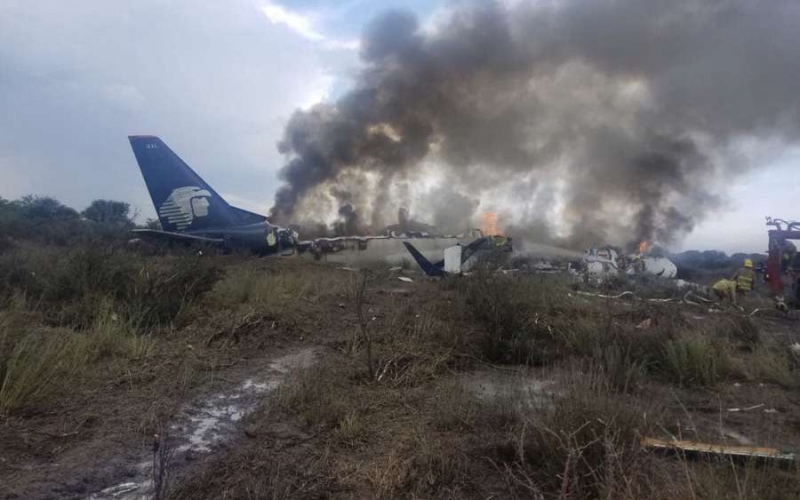 Reports are coming in that Aeromexico Connect flight AM2431 from Durango to Guadalajara (both in Mexico) burst into flames shortly after takeoff.

At 3:15 PM local time, the aircraft attempted to depart from Durango, but performed a rejected take off procedure after one of the engines failed at V1 speed. However, they were unable to stop, veering left and overrunning the edge of the runway, crashing into a nearby field. A runway inspection showed both engines had separated in the process, ending up on the left side of runway 03.

Passengers were lucky as the aircraft did not catch fire until 3-4 minutes after coming to its final resting positon. There have been no reported fatalities, but 18 people were injured and taken to hospital for treatment.

The flight was being operated by an Embraer ERJ-190AR (registration XA-GAL) with 97 passengers and 4 crew members on board. The fire eventually destroyed the aircraft.

Aeromexico has acknowledged the situation via their social media channels, providing updates as necessary.

They have also issued a release via their website (Google translated below).

Mexico City, July 31, 2018, 5:33 pm- About the plane crash that occurred today in the city of Durango of flight AM2431 on the Durango-Mexico City route, operated by an Embraer 190 airplane in which 97 passengers and 4 crew were traveling, Aeromexico informs:

Our priority is to guarantee the safety of the clients and crew on board, we are working for it. At the moment we do not have any reports of deceased persons. We are working with the corresponding authorities for the medical attention of the passengers and crew.

We are gathering additional information and will provide more details as they become available and confirmed.

We deeply regret this accident. The families of all those affected are in our thoughts and in our hearts. We are focusing on addressing this situation and will do whatever is necessary to assist the families of our clients as well as our crew in these difficult times.

We will keep you posted as more details come in. In the mean time, here are tweets with initial photos from the crash site.