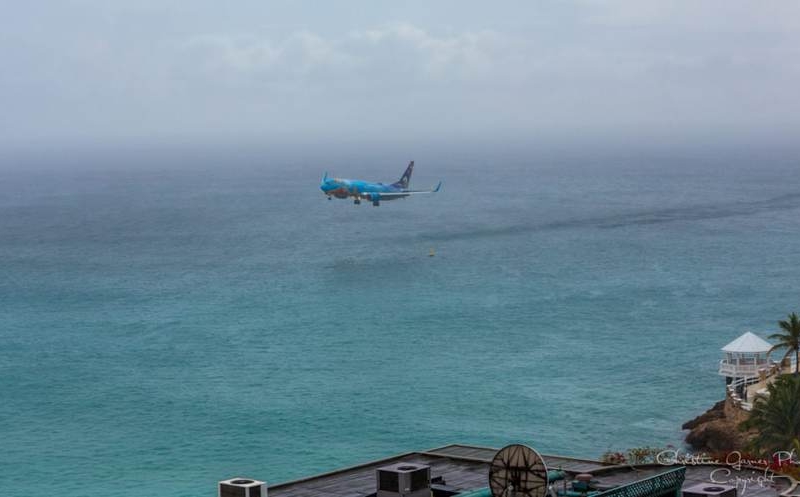 The Transportation Safety Board of Canada (TSB) has released its report regarding WestJet’s much talked-about Sint Maarten missed approach back in March 2017. The report found that “unexpected weather conditions on final approach, reduced runway conspicuity, and inadequate flight path monitoring led to a risk of collision with terrain.”

On March 7, 2017, WestJet flight 2652 (WS2652), a scheduled flight from Toronto Pearson International Airport to Princess Juliana International Airport, found itself in a tricky position after entering an area of significant rainfall while on approach into the airport at Sint Maarten. According to the report’s findings, there were a number of factors which contributed to the aircraft being in a much lower position that it should have been.

When the aircraft crossed the missed approach waypoint (MAPON), it entered an area where there was moderate to heavy rainfall, leading to a “significant reduction in visibility.” They found that the “runway lights and the visual guidance system (PAPI) had been set at a low intensity during the rain shower that had obscured the view of the airport environment.”

Anyone familiar with the approach into Sint Maarten would know about the popular Sonesta Maho resort to the left side. According to the report, “the features of a hotel located to the left of the runway, such as its colour, shape, and location, made it more conspicuous than the runway environment and led the crew to misidentify it as the runway.” 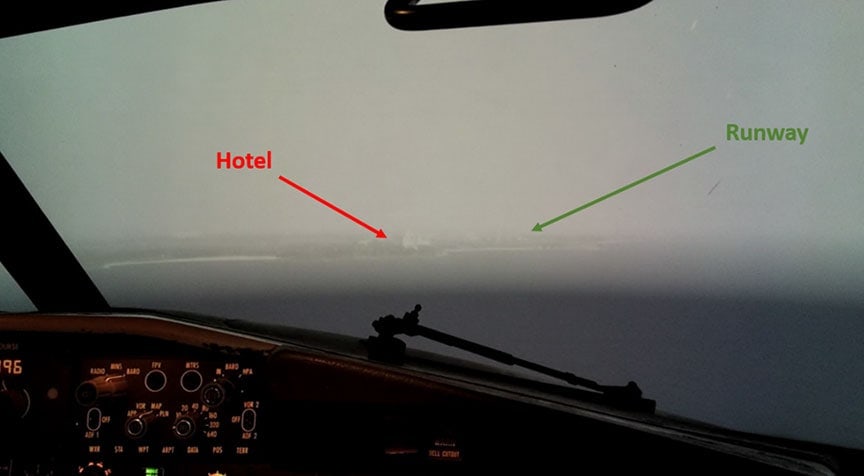 Visual references as seen in a flight simulator at approximately 500 feet AGL in poor visibility.

“An increase in visual workload led to inadequate altitude monitoring, which reduced the crew’s situational awareness. As a result, the crew did not notice that the aircraft had descended below the normal 3° angle of descent to the runway threshold.”

“Approximately 1 nm from the runway, the aircraft exited the shower; the visibility sharply improved, and the crew realized that they had been tracking toward an incorrect visual reference, which was a hotel situated to the left of the runway. At this point, the aircraft was 190 feet AGL, descending at 940 fpm, rather than 320 feet AGL on a standard 3° angle of descent. Now able to see the actual runway, the crew recognized that the aircraft had deviated laterally to the left of the inbound final approach course, but they were not immediately able to assess their height above water. The PF advanced the throttles from 52% to 75% N1 and began to correct the lateral deviation, but the aircraft continued to descend at about 860 fpm.”

The pilots were made aware of how low they were aircraft’s enhanced ground proximity warning system (EGPWS) issued the “TOO LOW, TERRAIN” alert at 63 feet. However, a difference in response procedures to this alert resulted in the crew exhibiting a delayed reaction to the first warning. It was not until the aircraft was as low as 40 feet did they call for the go-around.

The report also found that air traffic control did not alert the crew of the reduced visibility, resulting in them entering the approach where visibility conditions were below the minimum level.

The crew conducted a go-around, and only then did the tower close runway 10 for departures and arrivals due to poor visibility. The WestJet flight was put in a holding pattern for 45 minutes until visibility increased, and the flight touched down safely at on its second attempt.

As a result of the incident, WestJet issued a communication letter to all its pilots, breaking down the events and laid out a corrective action plan, “providing information regarding possible challenges and threats” on approaches into Princess Juliana.

“WestJet also revised its Route & Aerodrome Qualification for TNCM with additional information. In addition, guidance on airport lighting system management will be added to the Air Traffic Services operations manual in TNCM by September 2018.”