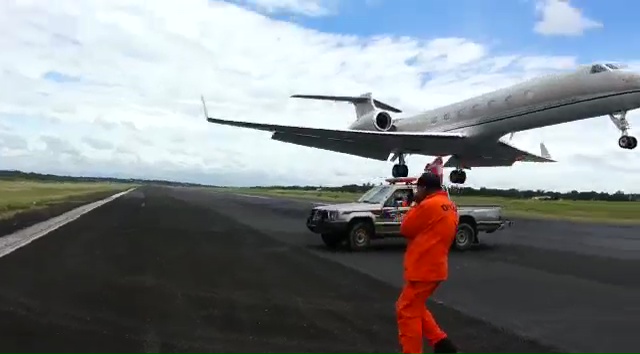 A video has surfaced showing six workers (one filming) from the Dirección Nacional de Aeronáutica Civil (DINAC) having a close encounter with a private jet while conducting maintenance work at the Asuncion Silvio Pettirossi International Airport (ASU) in Luque, Paraguay.

The video starts by showing showing five men carrying out patchwork on the airport’s only runway. The person filming the crew alerts them about an incoming aircraft and tells them to get to safety. Just a mere second after the men move to the side, a Gulfstream aircraft sails on by, touching down moments later.

The video which went viral on social media platforms across Paraguay over the weekend, was brought to the attention of DINAC’s president, Edgar Melgarejo. In a press release, Mr. Melgarejo stated that the video was filmed about 4-5 years ago, and that the matter would be investigated to clarify the events that took place. The agency issues a series of statements via Twitter, defending its safety measures implemented at the time.

We have copied rough translations of the tweets below.

In relation to the video that circled on various networks, in which an aircraft landing operation is observed a short distance from the track maintenance personnel in full work, it is pertinent to communicate that:

The video dates from 4 to 5 years ago. Even one of the officials who is observed in the video celebrated his retirement on April 30, 2016.

The maintenance works to the track are constant and with all the security rigor. Coordinated and informed with time via NOTAM, as required by the international procedure to which the Institution is submitted.

Each operation is veiled by the Control Tower and each aircraft receives instructions for each action, this is independent of NOTAM, which is previously issued.

The aircraft commanders are obliged to respond to the directives of the Air Traffic Controllers and it is their obligation to be aware of each NOTAM issued by the institution.

The President of the DINAC, Dr. Edgar Melgarejo (@edgarmelgin) requested several reports about this video in order to clarify this event with more precision.”

According to a Paraguayan publication ABC Color, the pilots involved were also made aware of the incident, however we have been unable to determine if there were any consequences as a result of their actions.

The airport’s runway has always been a topic of concern due to poor construction and maintenance. The government has since announced plans to completely revamp the runway and its related facilities, as well as build a second terminal.