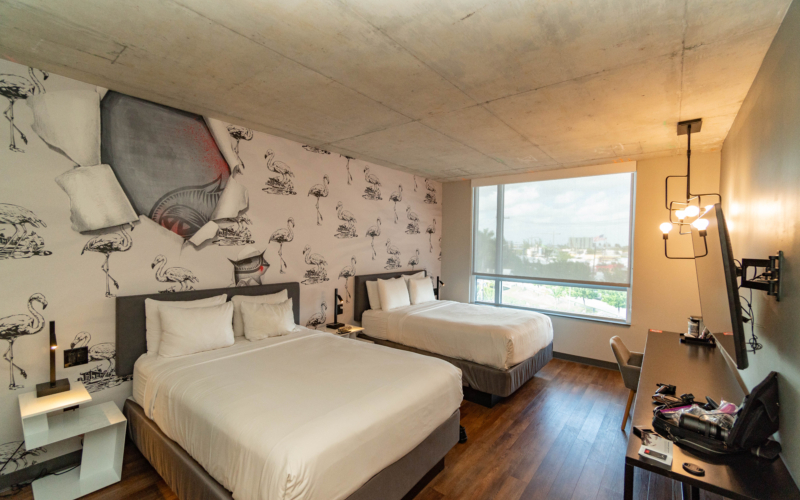 For my second serious trip since the you know what, I decided to head to Miami for a few days to meet up with some friends. As it was just a very short weekend, I did not want to book anything too expensive as I would have been out for most of the day anyway.

I booked the Radisson RED Miami Airport located about 5-10 minutes east of the Miami International Airport. This Radisson is the latest in the RED line, being commissioned in 2021, offering 157 rooms in various configurations.

According to Radisson, the RED brand is “targeted to guests with an “ageless millenial mindset”, incorporating more art, music and fashion into its services and offerings with a focus on communal spaces such as the bars and lobbies, digital customer service, and bold color interiors. It has its own branded restaurant, called OUIBAR, and is marketed more at millennials. The brand’s emphasis is on modern design, technology, and quick food service.”

As mentioned above, the hotel is located just east of Miami International, situated in a pretty industrial area. It’s not the fanciest of neighborhoods, and some people may have an issue with that, but as an airport hotel, I don’t see it as a big problem.

One of the biggest “issues” to consider before booking is that airplanes departing from runway 8 right at Miami pass right over the hotel before making their respective turns. I personally had no issue with this as the rooms have sufficient sound dampening, but it is still noticeable and could be bothersome if you’re a light sleeper.

Walking into the hotel, you immediately notice the artistic and industrial layout. The check in area is pretty basic, with small two kiosks to the left of the entry area. I thought I entered via the wrong entrance at first as I want expecting a grander check in desk.

Check in time is at 3:00 p.m. and check out is at 11:00 a.m. As my flight touched down at midday, I decided to go to the hotel anyway to see if I could stow my bags. Thankfully my room was already available, and after a few minutes processing my payment details, I was checked in around 1:00 p.m. If I had to complain, the only issue would be that the interaction with counter staff felt very transactional. While they were not rude in any way, it just felt like, “ok let me take your money and here’s your room key. Bye.”

Just ahead of the check in area is the OUIBar + KTCHN dining area, but I’ll get back to that later on. Rooms are accessible via the hallway to the immediate left just after the check in counters.

The room hallways also had a very industrial feel with a mix of reds and grays. The ceiling also conformed to the same theme with its exposed ventilation ducts, draining piping and lighting fixtures, all of which were painted in black.

I get that the hotel tried to go for an industrial feel, but the huge room numbers on each door made it feel more like a prison than a hotel.

I was booked in room 322, on (you guessed it) the third floor. The room was a standard hotel suite with two queen beds, and bathroom on the left right after entry. The queen rooms are slightly larger, coming in at 338 square feet compared to 306 in a king suite.

The rooms also have a very minimalist and industrial vibe. For the CS:GO nerds like myself, the hallways and room reminded me of a mix of the Vertigo and Breach maps. The room features basic amenities including a wall-mounted smart TV (YouTube, cable and other basic info channels), a work desk, coffee maker, as well as the usual storage area, ironing board, extra pillows, safe and mini fridge.

Staying true to the industrial theme, the safe and mini fridge are located in a metal mesh cabinet, while the clothes rack is just to the right behind to MDF-type cupboard doors. There were two complimentary bottles of water above the fridge.

There are three night stands, one of each side of the bed and in the center, each with their own reading lamp and access to power outlets. The back wall was painted in a black and white flamingo pattern, while the ceiling was intentionally left bare after construction. In some corners, you could even see construction notations spray painted onto the roof to mark window corners.

They call it modern, but I just see it as a construction cost saving technique. Oddly enough this seems to be the only Radisson RED property with this design, as all the others I checked out have completely painted ceilings. It’s definitely unique but not may not be for everyone.

The bathroom, while big enough, also keeps to the minimalist and artistic theme with white tiles and red borders. The lack of counter space was a bit challenging as the glass shelves were too small to rest any pieces of clothing. For two or more people, these shelves quickly get filled up even with the most basic of items.

Sadly the open concept shower area continues here, with a small pane of glass separating the shower from the rest of the bathroom. As you can imagine, the floor got wet even with my best efforts to keep the spray within the small confines.

Unlike many traditional hotels, room cleaning is done once every two days in an effort to minimize their carbon footprint (and low key save money). Like with other Radisson RED brands, you are urged to re-use your towels, even though there are sufficient extra towels, and new ones can be requested if needed.

My room had a view of the pool and parking lot, and if you like plane spotting, you can see the departures passing overhead.

Given that this is an airport hotel, there is a simple restaurant setup on the ground floor called the OUIBar + KTCHN. It open from 6:30 a.m., serving to-go breakfast items until 11 a.m., and continues for the rest of the day until 11 p.m. You can buy bottled alcoholic drinks throughout the day, but the bar does not officially open until 4 p.m. From then on you’re able to order custom cocktails.

There is also a rooftop bar, but I was unable to confirm at the time if it was open to guests.

The hotel offers essentials such as a fitness area and pool. There was also an advertised play area (to the left as soon as you enter), but it was closed to the public at the time.

The hotel also offers a free airport shuttle operating between the hotel and airport every half hour, running from 5 a.m. to midnight. For those driving, there is complimentary parking for one vehicle per room.

As one of the simpler airport hotels that I’ve stayed at, the Radisson RED Miami Airport hotel is meets the basic needs for a business traveler or someone looking to spend a night or two for a transition. It’s location is convenient if you’re doing business in the area, or plan to go shopping, but it is a bit far if you plan to spend most of your time nearer to Miami beach or Brickell. It is definitely recommend that you either ride share or rent a car, as it doesn’t appear to be the safest area to walk about.

I’ve seen a number of mixed reviews, but the hotel still had its brand new and comfortable feel, being less than two years old. I think some aspects are a bit too minimalist, especially in the bathroom area. Nonetheless, if I were staying in the area for a night or two, it would be my choice given that it’s very reasonably priced.