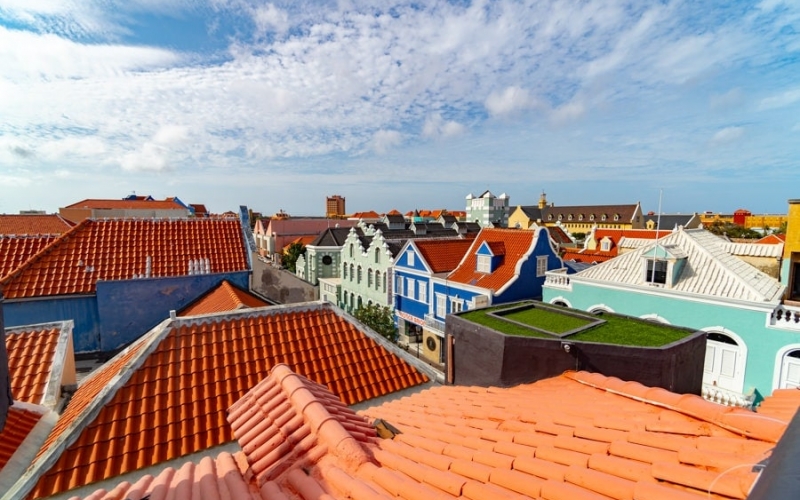 When I decided to visit Curacao, I needed somewhere that was close to the center of all the action, so I decided to book a night at the Curacao Suites Hotel. Two of the biggest draws were its super low price and free parking option.

Curacao Suites Hotel is rated as a 3-star hotel as it focuses more on convenience and cost savings for the customer, rather than super luxury like the bigger chains further out from the city.

I visited in the early part of May 2019, but prices still remain low well into the peak travel season.

I booked the most basic room called the “Studio Suite with kitchenette” via Booking.com for just $60 a night non-refundable. If you prefer to pay on arrival, the rates are higher around $70-75 a night.

The hotel is conveniently located in Otrobanda, which is just within walking distance of the shops in Punda. If you are driving, it also is just two minutes away from one of the major arteries around the Willemstad area. However, the airport is about a 15-20 minute drive depending on which route you take. It’s not a big deal though as you would be better off near the city area. 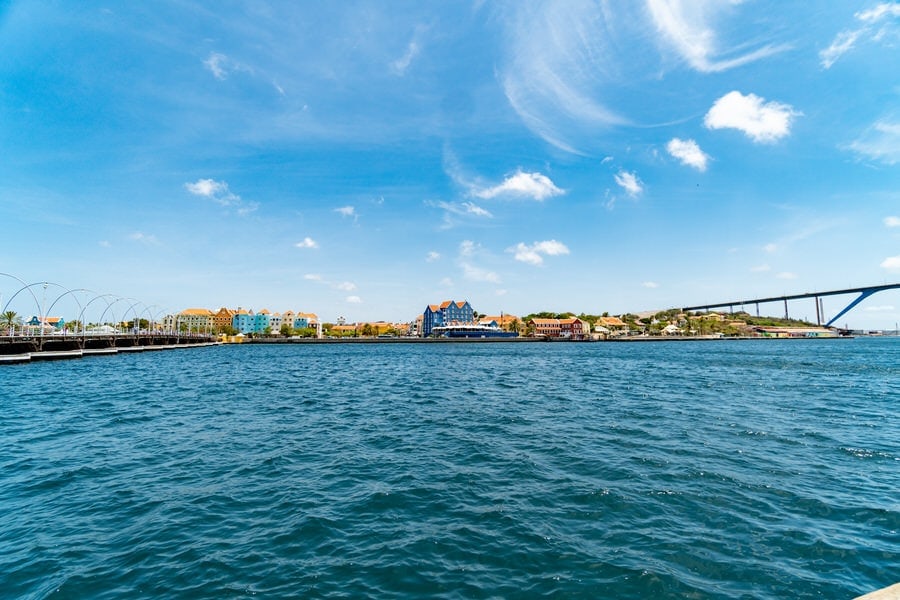 View of Otrobanda from Punda

As my flight from St. Maarten was delayed, I arrived close to 10 p.m., four hours later than intended. Nonetheless, there was someone to greet me at the check in counter to get me sorted out. After a quick chat, I had my room key and was also given a tour of my room.

My room (108) was on the ground floor, next to the lobby. The suite is actually quite large and has all the basics including a king size bed, TV, work desk, and cupboards to store clothes (with the ironing board inside). There is also a kitchenette (not pictured) to the right side featuring a mini fridge, microwave, sink, heating element, and a coffee maker (with coffee pods, sweetener, and cups). 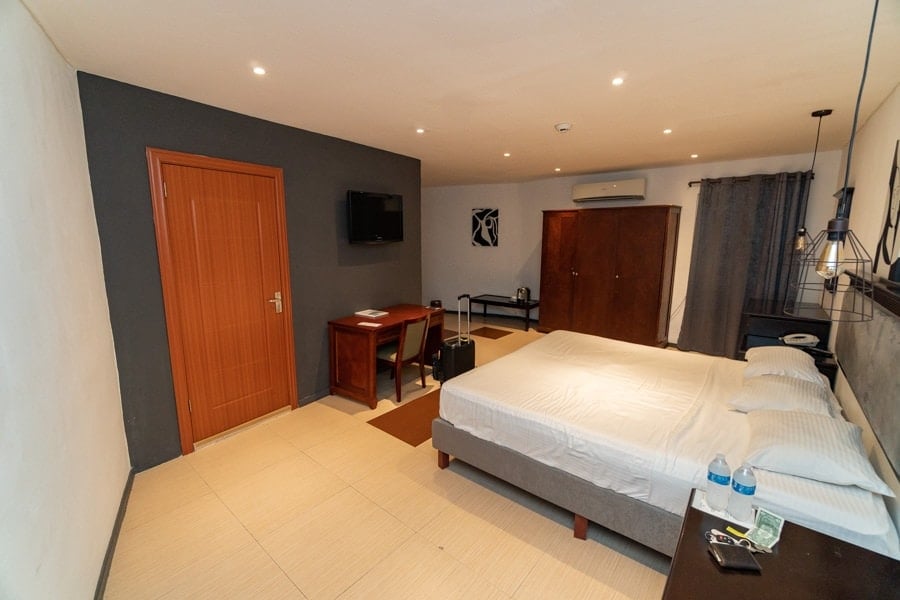 Scrolling through the different photos on travel review sites, it does appear that the rooms have slight variations to its layout depending on which suite you are given (even if you choose the same type). 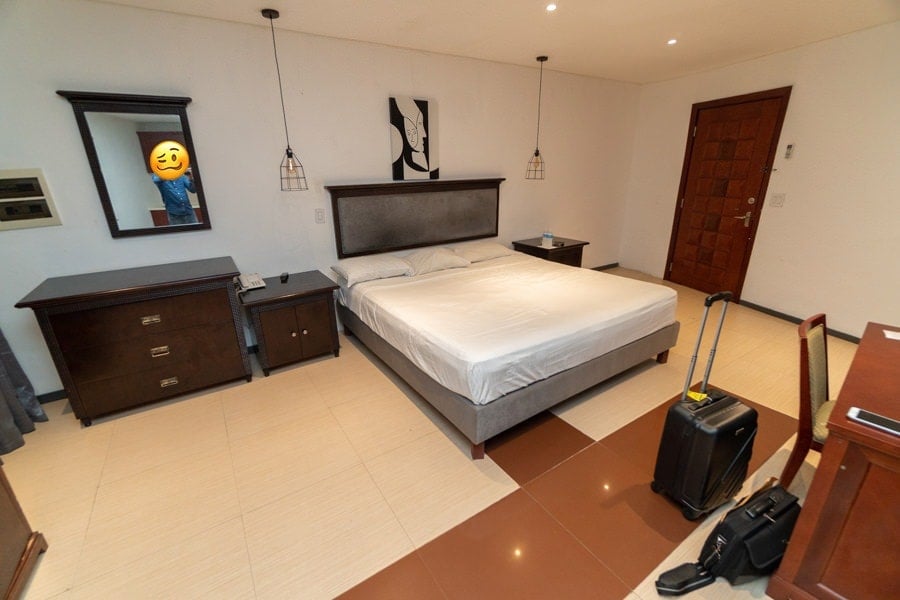 The room itself was in immaculate condition, but the furniture has definitely seen better days. My only main concern was the stain on the work station chair. As I would only be here for one night, I did not bother requesting that it be cleaned or changed. 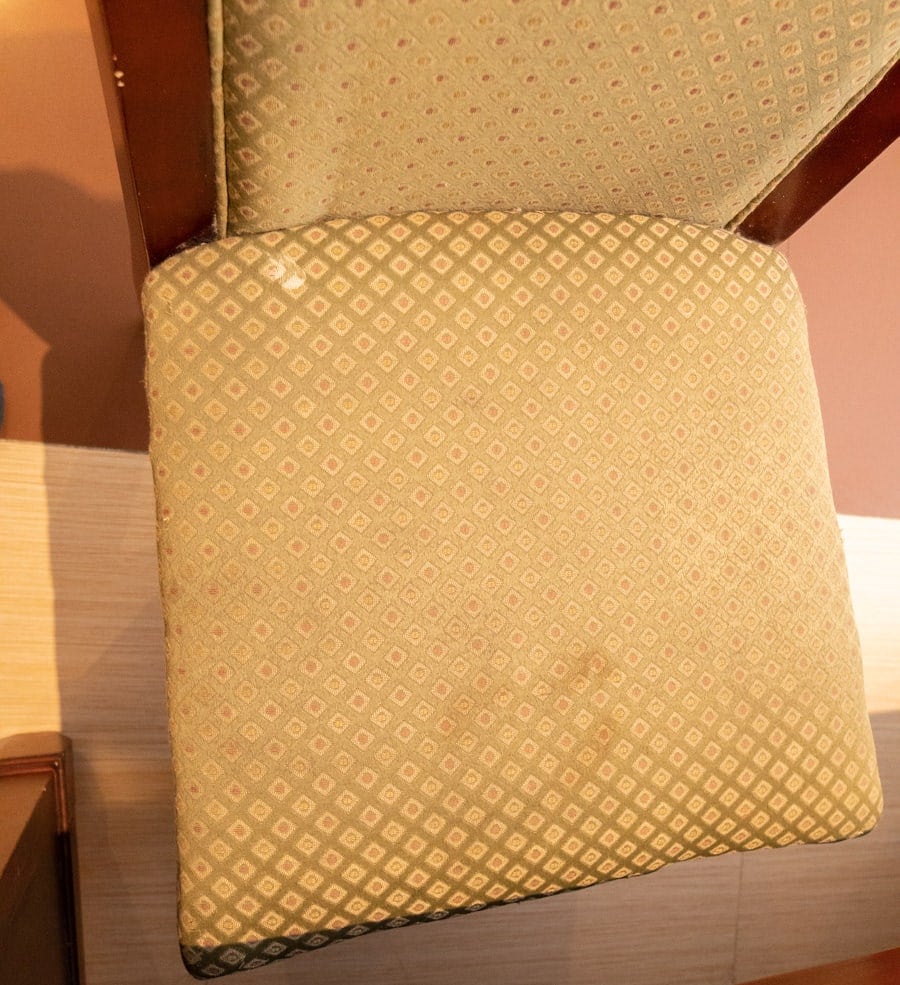 The rooms also feature 220v and 110v wall sockets, but I am not really sure what type of plug it supports (Some type of a NEMA plug?). There is a single 110v outlet in the kitchen area, so I had to plug my devices there (which was a bit on an inconvenience) as it was so far away from the bed. 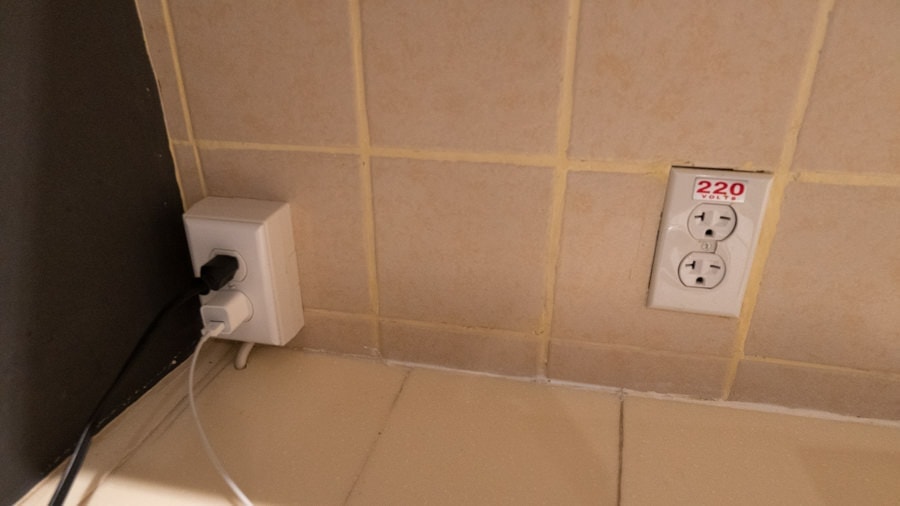 There was also this safely concern where the cover plate had fallen off and was never replaced. Thankfully I did not have to plug anything here (not that I could even if I wanted to). 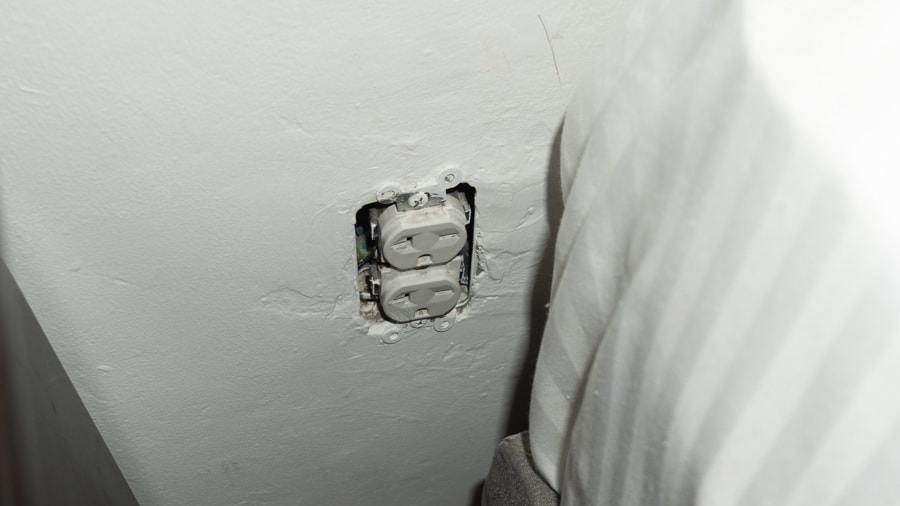 Unlike some of the more expensive hotels I’ve been to, the bathroom actually features two face basins, which can be convenient for two people getting ready at the same time. There is an open concept shower, which has a heating element for hot water. Make sure it’s turned on before you bathe or else you’ll be freezing if you don’t like cold water. 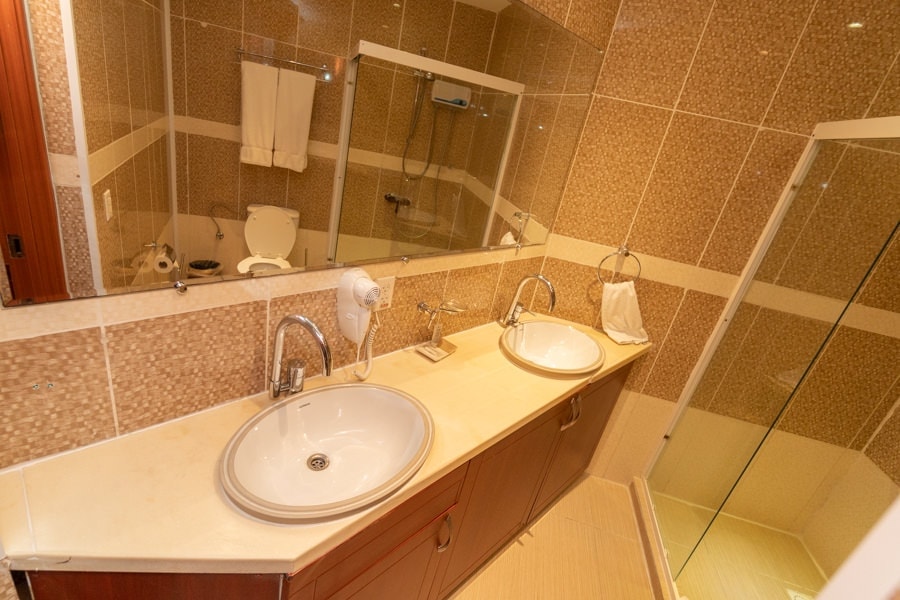 Unfortunately the grip that keeps the hand shower in place was slack, so I ended up doing a lot of one-handed soaping as I sometimes like to leave the water running even when I’m bubbling up. The rubber seals of the connector below the tap appeared to be badly worn as water leaked through the sides, reducing overall pressure to the shower head. It was not terribly bad, but stronger water pressure would have been nice.

Otherwise, the bathroom was in top shape, and they even provided complimentary soap good for one shower. 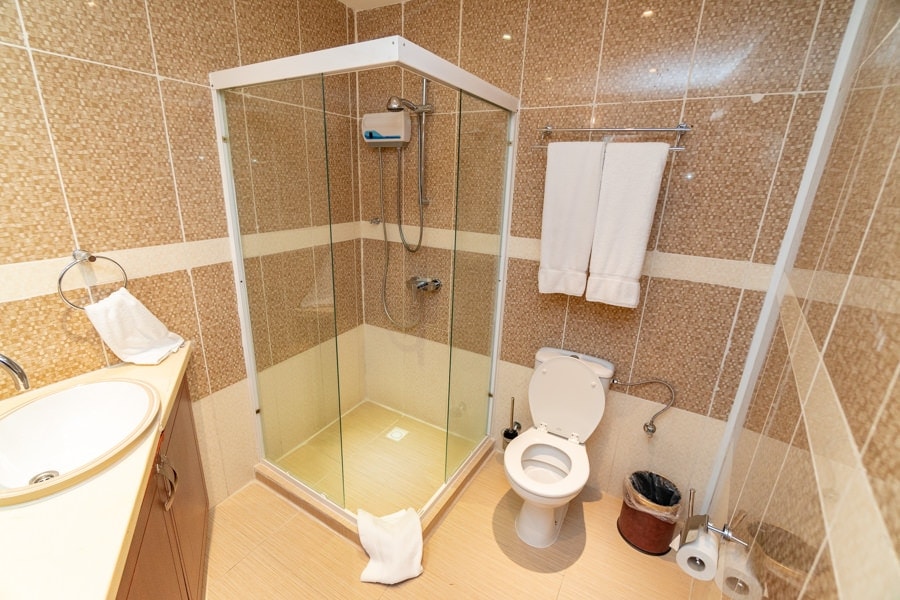 The room had only one window which can make the room somewhat dark during the day if the lights are not turned on. However, you can open the panels to get a bit of fresh air. I was able to get a view of the nearby road, but as hotels like these are within the town, the limited view is expected. 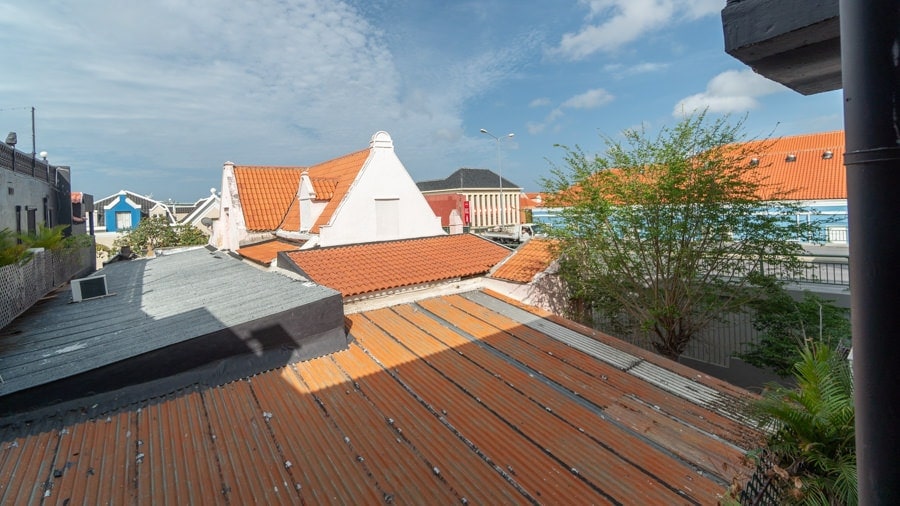 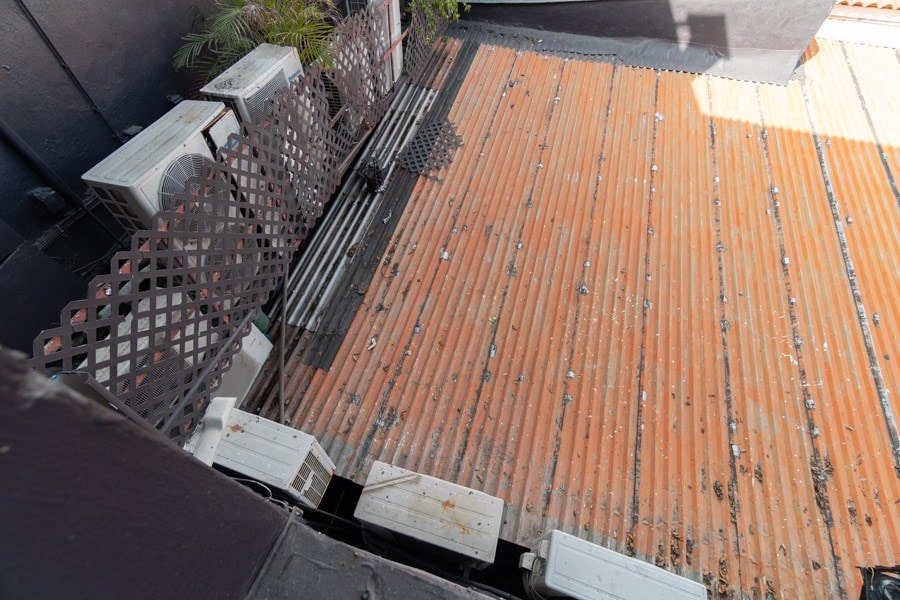 Continental breakfast was included within the price, which was a huge plus as a similar meal could easily cost $10-15 depending on where you go.

Breakfast is served on the upper level, featuring all the basics including bread, eggs, bacon, sausages, cheese, cold cuts, yogurt, coffee and juice.

There is also a drink and snack machine in the lobby, and more premium alcoholic beverages can be purchased via the front desk. 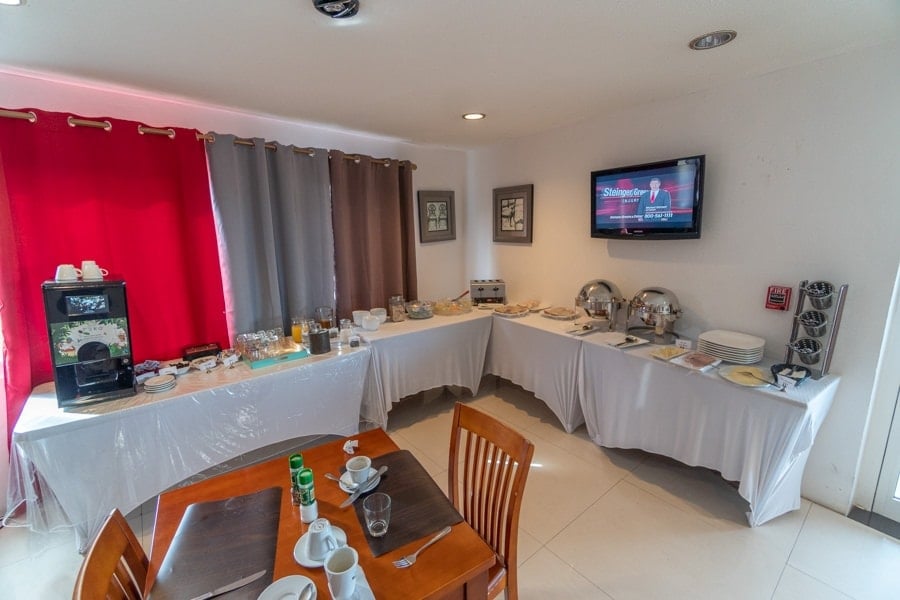 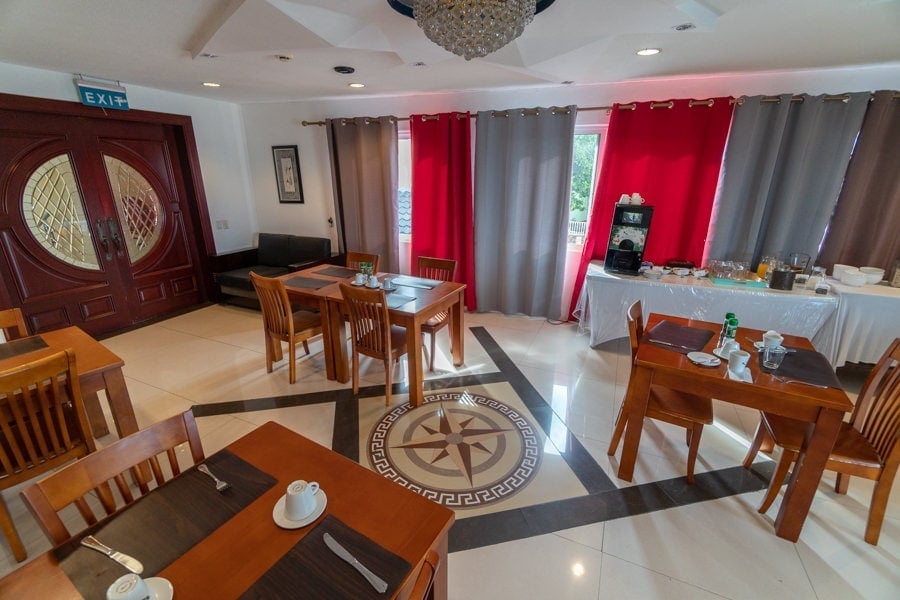 The only complaint I had was that there was no bacon, and when I asked, I was told it would be ready in a few minutes. After 15 minutes of waiting, I didn’t bother waiting around even though I asked again and was given the same answer. The rest of the breakfast was quite satisfactory and it was nice to have some fruit after the previous nights of pigging out. 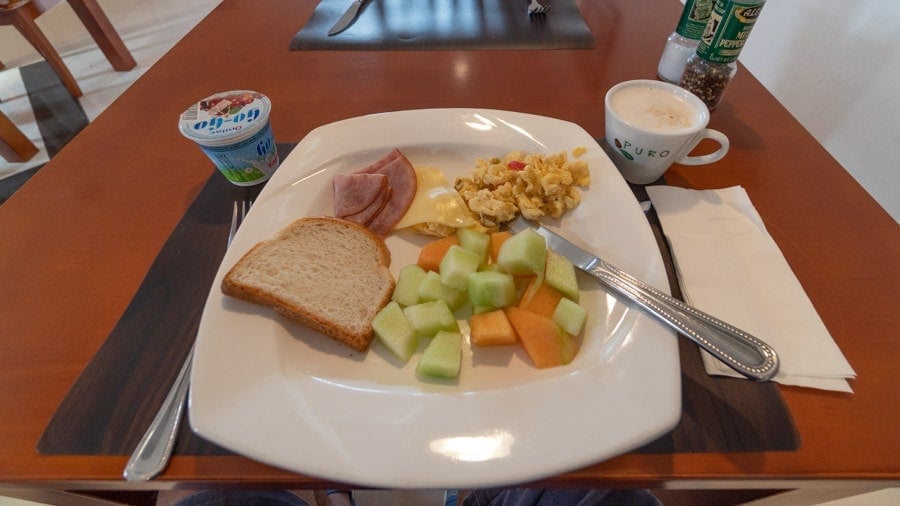 Guests can also eat outside on an open deck with lovely views of the city. 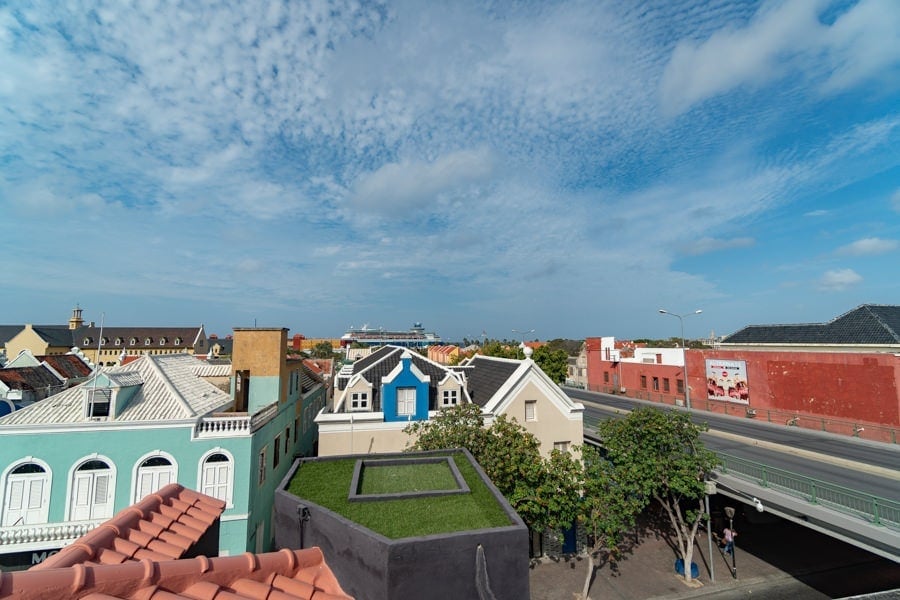 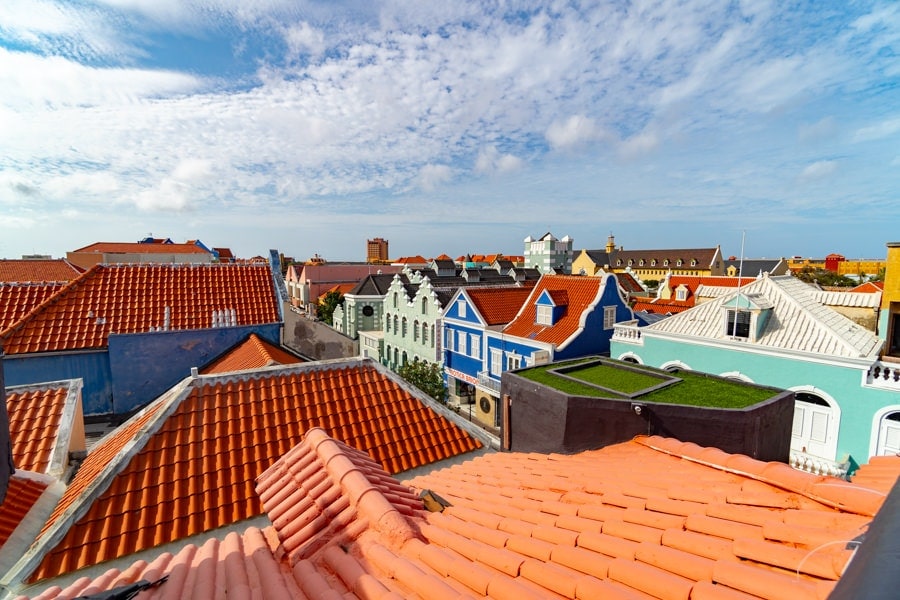 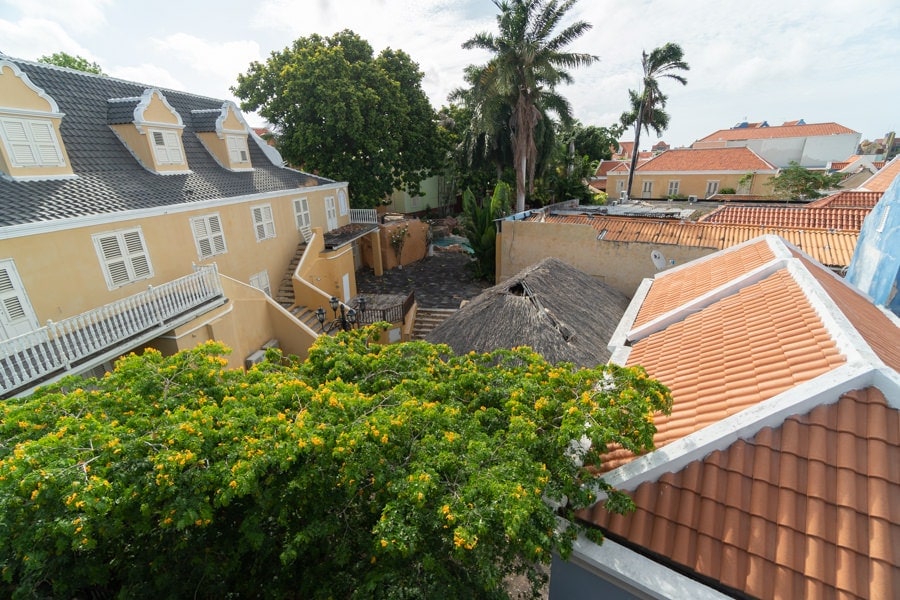 Wi-Fi and wired internet is also included in the price, but the Wi-Fi in my room was not good at all. I only got proper signal in the kitchenette area or near the bathroom. Thankfully I had a Digicel sim card with data, so that sufficed in the mean time.

Guests looking to have parties or meetings are in luck as they offer rooms to facilitate such events.

There isn’t an on-site pool, but there is one nearby at a cost of $10 per day. However, I don’t really see the value in a pool at a property like this given that it’s more about the convenient location rather than lounging around all day at a traditional resort.

As mentioned above, there is free parking, which is a plus given the location. There are not many spots, but given limited space, the first come first serve rule applies. Luckily I was always able to get a spot the few times I came in and out.

Even though I did not have much interaction with the staff, the service was quite good the few times I did. Even if you are just passing by, they always courteous and make sure to greet you, and wish you well for the rest of the day.

Given the dirt cheap price (and complimentary breakfast), as well as an ideal location with parking (if you are renting a car), Curacao Suites Hotel is a well positioned hotel offering the essentials for a comfortable night’s sleep.

It is more than apparent that the hotel was the result of older building being renovated for a new purpose. However, the owners have done a great job at restoring the place to offer guests a decent place to stay for the night.

If you are traveling on a budget but want great access to the city, I would recommend staying here. There are more luxurious spots around Curacao, but they come with added drive time and a higher price tag.