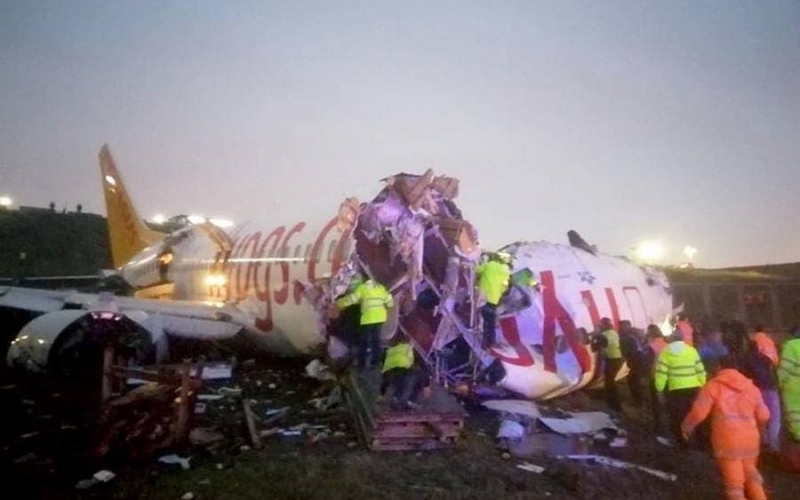 Flight PC2193 which landed at 6:19 p.m. local time but was unable to stop in time and ran off the edge of the runway. The aircraft went down the embankment, resulting in the fuselage splitting into three segments, with the front section flipping upside down. There were 177 passengers and 6 crew members on board, with one fatality being recorded so far. A small fire was also seen near the rear of the aircraft, even though later photos indicate that it was put out. The airport has since shut down runway operations.

According to Turkey’s Minister of Transport and Infrastructure Cahit Turhan’s initial, there have been injuries (157 based on latest reports) as crews work to evacuate everyone from the aircraft. As many as 125 emergency teams were dispatched in response to the situation. An investigation has also been launched into the matter.

Pegasus issued a further statement this evening, announcing that three passengers lost their life in the incident.

Pegasus Airlines shares in the profound sorrow of all the people affected by this tragic accident. Above all, we would like to express our profound sympathy and heartfelt condolences to those families and friends who have lost loved ones and extend our thoughts to them at this difficult time.

Our injured passengers continue to be treated in hospital and we wish them all a swift recovery.

We are deploying every resource to support those affected by this accident. Pegasus Airlines’ priority is to support the relatives and friends who have lost loved ones, and we will be doing everything we can to help them in the aftermath of this tragic event, as well as doing our utmost to provide our full support in meeting the needs in hospital of our injured passengers.

The flight was operated by a Boeing 737-800 registered as TC-IZK. According to Airfleets, the aircraft is about 11-years-old.

Weather reports indicate the aircraft landed during a thunderstorm, with winds gusting up to 37 knots and visibility of 7,000 meters.

Further information from the Aviation Herald indicates the aircraft came in well above recommending landing speeds, taking some time to make contact with the runway.

According to Mode-S data transmitted by the aircraft the aircraft landed long and hot, 1500 meters before the runway threshold the aircraft was descending through 950 feet MSL (corrected for local pressure, actual Mode-S reading 1500 feet)/661 feet AGL at 194 knots over ground, touched down about abeam taxiways T/F (about 1950 meters/6400 feet past the threshold, about 1000 meters/3300 feet before the runway end) at about 130 knots over ground, overran the end of the runway at about 63 knots over ground veering slightly to the left (last transponder transmission), hit the localizer antenna runway 06, went over an airport road and a cliff and impacted the airport perimeter wall. 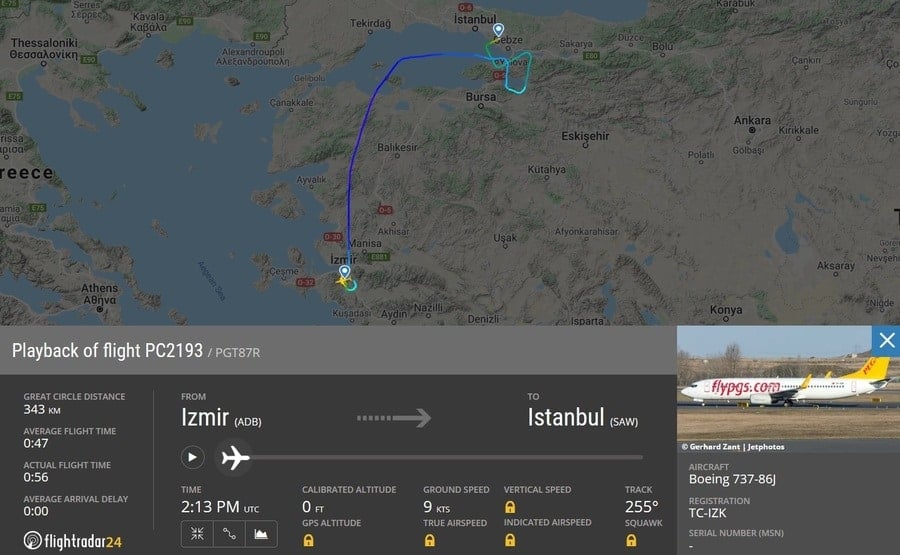 Second runway excursion at Sabiha in less than one month

Interestingly, this is the second runway excursion involving a Pegasus Airlines aircraft at Sabiha Gokcen Airport. On January 7, 2020, another Boeing 737-800 (registered as TC-CCK) operating flight PC747 from Sharjah Airport, United Arab Emirates (SHJ) also skidded off the runway, ending up in the mud just left of runway 06. According to the weather reports at that time, there were light showers and winds also gusting at 37 knots.

Photos and video of the crash

Here are some photos and video from Twitter showing the aircraft resting in the embankment just below the runway. 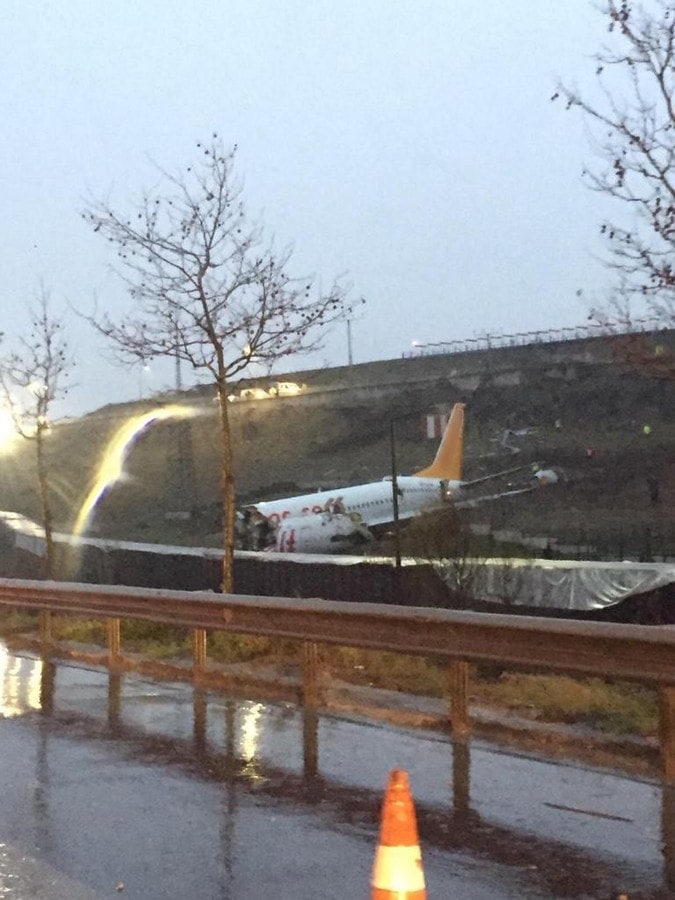 PLANE CRASH Pegasus #PC2193 Boeing 737-800 from Izmir went off the runway in Istanbul and broke apart. Too early for confirmed number of people on board (approx 180 reported) or casualty information. Reports indicate several have gone to hospital. pic.twitter.com/X53PF38C1P