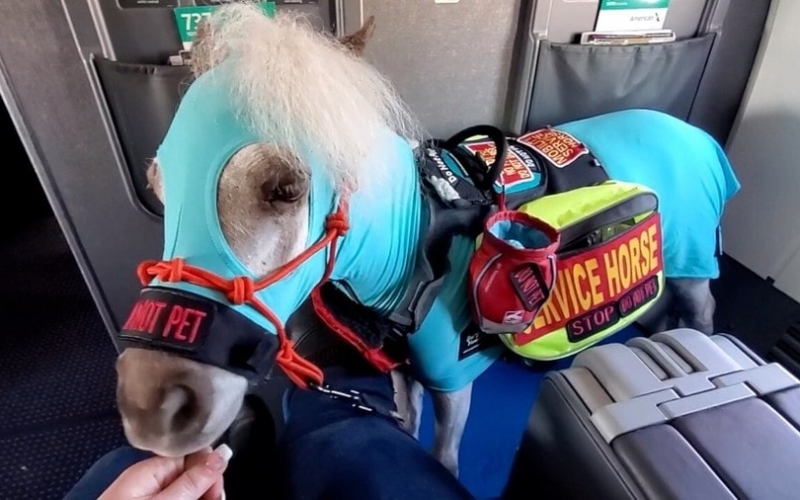 As we come to the close of the week, we’re finishing up with a pretty neat story about how one mini service horse had the ride of a lifetime in first class on board American Airlines.

Fred the mini horse traveled for the first time from Grand Rapids, Michigan to Ontario, California with his handler Ronica Froese. The round trip with a stop in Dallas, Texas took months of preparation in order to make their travel dates perfect.

According to Froese, Fred was trained to be both a therapy and service animal. In a FOX17 interview, she told reporters that she “spent a year of [her] life training this horse extensively for what he has and [she] was totally prepared for everything.”

“We left in the afternoon, we flew from Grand Rapids, we connected in Dallas and we went to Ontario, California.”

“I purchased two first class seats in bulkhead seating, I paid an arm and a leg for tickets but I did so because it was Fred’s first time and I wanted him to be comfortable, I wanted him to have the most room.”

Besides the expected odd glances and stares from onlookers, Froese said they had an extremely positive experience and thanked American Airlines ground and crew members, as well as the security personnel with the TSA for making the process as simple as possible. Even the pilots and some other ground staff wanted to get in on the action for a photo with Fred.

Fred is part of the non-profit organization Little Horses Big Smiles Inc. which Froese operates (along with other volunteers), providing assisted therapy services to health facilities, schools and other related organizations.

Back in mid-January, the DOT proposed an amendment to air travel policies where the definition of “service animal” would be limited to being a dog. This came about as a result of passengers abusing the policy, trying to bring on a variety of species including peacocks, monkeys, kangaroos, snakes, and even penguins. If they new policy does take effect, it would then be entirely up to the airline if they choose to accept animals in the cabin outside of what is accepted.

The amendment is still open for debate, and Froese hopes her experience will change the DOT’s perspective on the situation.