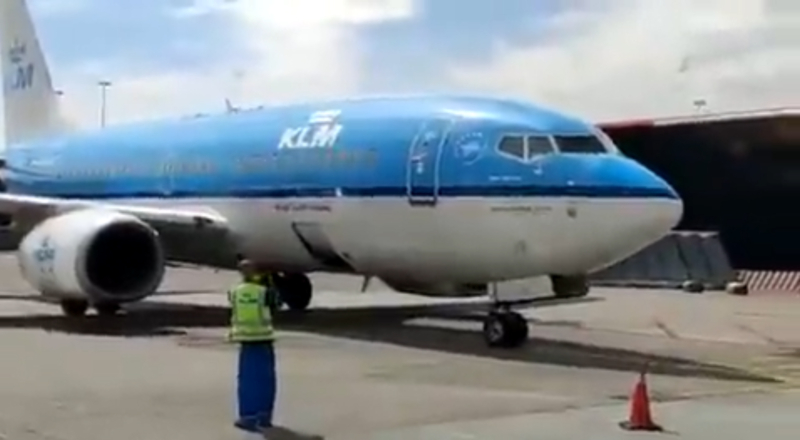 On August 2nd, while most of the world tracked Nancy Pelosi’s flight to Taiwan, a KLM Boeing 737-700 touched down at Amsterdam, and taxied in with its forward cargo door open.

In a video shared on Twitter, the KLM Boeing 737-700 (registered PH-BGT) was seen taxiing to the gate with its cargo door partially opened, after completing a scheduled flight from Leeds, England as KL1542. In a response from KLM, the airline said that a “technical defect” resulted in one of the cargo hatches being pressed in.

“During flight KL1542 from Leeds to Amsterdam on 2 August, one of the cargo hatches was partially pressed in due to a technical defect. Passengers and crew were not in any danger. There was also no risk of cargo or bags falling out.”

How did the cargo door open?

KLM’s statement does not indicate when exactly the incident took place, but it’s fair to say that the door opened when the aircraft landed, or at least very close to touchdown. Unlike most other aircraft which have outward opening cargo doors, 737s have inward opening cargo doors. While this may be an inconvenience for loaders trying to fully utilize cargo space, it acts as a good safety design as positive pressure from the cabin’s pressurization system keeps the door securely closed during flight even if the locking mechanism fails.

Assuming that the door locks failed much earlier on, the pressure being exerted on the door would have kept it shut for the entire duration of the flight until touchdown. At this point, pressure inside and outside the aircraft would be almost symmetrical, allows wind rushing along the side of the frame (and possibly vibration from touchdown) the opportunity to blow the door in. During descent, the positive pressure in the cabin is slowly and evenly decreased until it meets that of the arriving airport. As the aircraft would still have slight pressure in the cabin until touchdown, one can speculate that that’s when the door finally got a chance to open.

It’s unclear if the pilots received a warning about the cargo door lock failing, but an investigation was launched into the matter. The aircraft was pulled from service that day, and after a quick repair job, it continued on to Naples, Italy the next day. As for the mention of no lost bags, cargo being transported in the forward and aft holds are secured with nets and straps, so even if the door somehow blew out mid flight, the bags would have generally stayed in place, and your tank tops would not have ended up in the North Sea.