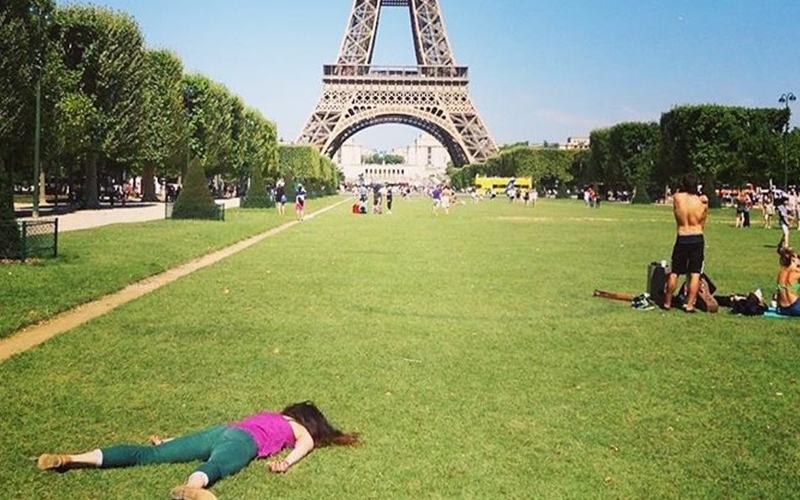 Most Instagrammers tend to focus on taking perfectly timed and composed shots for their accounts, to capture what appears to be something spontaneous. However, one artist has started doing the complete opposite by taking random snaps of herself ‘dying’ at popular tourist landmarks in an attempt to fight the status quo.

Stephanie Leigh Rose created the Instagram page entitled STEFDIES where she instantly sets up her ‘dying’ pose at popular travel locations. There is no advanced prep work or props, but rather just that one spontaneous photo versus regular users that take a few dozen pictures to then later choose the best for the ‘gram’.

“The entire point of STEFDIES, is that the viewer is allowed to participate in the image-, whether that is by imagining the circumstances of the surrounding image, or in recreating the STEFDIES pose in their own photos.” Stepahnie told Bored Panda. “My long hair (and swimsuit in selected photos) would allude to the fact I am a female, but outside of a viewer coming to one of my gallery shows and meeting me personally, I prefer to keep STEFDIES neutral and free of age, nationality, politic, socioeconomic status. STEFDIES is a character of its own, and I invite people to connect with that, and interpret the scenes as they wish. Part of the joy and humor of STEFDIES, is no-one knows exactly what the hell is going on, and that’s pretty much a direct reflection of real life in general.”

“All STEFDIES images occur spontaneously in my daily life,” the artist said. “The images the viewer happens to see are the 25% of images that are useable. This is why a STEFDIES image is the opposite of a selfie. A selfie has controlled conditions, specific lighting, makeup/hair/wardrobe, an agenda, and is focused on the individual personality- it is a contrived and manipulated image distorted to achieve a desired result. STEFDIES is the polar opposite- I get one chance to get the shot, if it doesn’t happen, c’est la vie. We have one life to live, and we don’t get re-do’s- and i would like to think i try to capture that feeling, that fleeting sense of life and its impermanence, in my photos.”

Here are a few more from her page which she updates periodically as she travels the world.