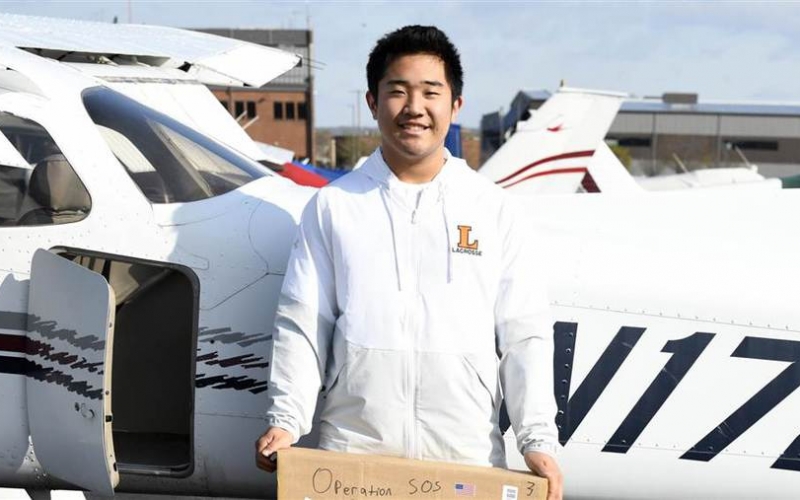 While most teens may be home playing videos games, browsing social media and taking online classes, TJ Kim is using his quarantine time to help deliver much needed medical supplies to various rural hospitals in Virginia.

Kim, who is working towards getting his pilot’s license, wanted to do something for his community and opted to put his flying lessons towards the greater good. With help from his dad and flight instructor, he started “Operation SOS” (Operation Supplies Over Skies) in order to get donated medical items delivered to various critical access hospitals in need.

As quarantine efforts ramped up in the Maryland area, students would have been forced to stay home for the rest of the year and seek alternative ways of catching up on their studies. Kim who is a sophomore at Landon School in Bethesda, Maryland, was affected like many others. Besides his study plans taking a hit, he was also disappointed that the lacrosse season was cancelled. Instead of taking the situation to heart, he has decided to give back to the community.

He noted that at Landon School, there is a big emphasis on community service. After talking to his dad about what possible ideas to help out, he started Operation SOS. While TJ arranged the flights, his dad focused on gathering donated items including gloves, masks, protective eye-wear, gowns, sanitizers and other items needed at seven rural critical care hospitals in Virginia.

As he is now able to fly cross country flights, he can fly solo to any airport within a 50 nautical mile radius from his base in Maryland. With the target of delivering good to seven hospitals within the state of Virginia, his final and longest flight will take him to the town of Clintwood.

Kim, who pilots a Cessna 172R, said that the biggest challenge was not so much landing at the smaller general aviation airports, but rather collecting enough donated supplies for each trip.

According to Associated Press, on his most recent trip, he delivered 3,000 gloves, 1,000 head covers, 500 shoe covers, 50 non-surgical masks, 20 pairs of protective eye-wear and 10 concentrated bottles of hand sanitizer to an airport in Winchester, VA, which were then transported to a critical access hospital in Woodstock.