This Comfort Inn Boardroom Suite Literally Has A Boardroom In It 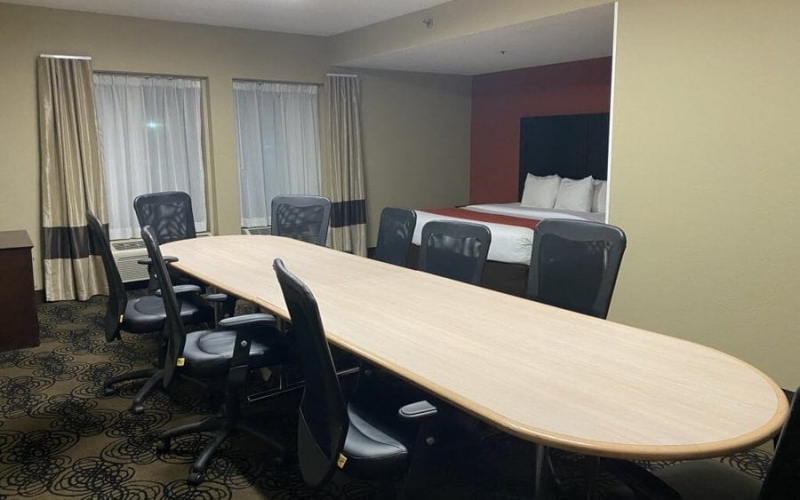 It’s not odd to book large hotel suites, inclusive of conference rooms, but Eoin Carrigan was in for a shock when he booked a last minute room at the Comfort Inn O’Hare hotel in Chicago.

Carrigan said that they would be putting him up in the “Boardroom Suite”, but he was in for a shock when he actually got to his room. Upon opening the front door, there was a full-sized boardroom table with accompanying chairs, along with his bed in the corner.

Flight out of Chicago cancelled so I’ve been put up in the O’Hare Comfort Inn. Lady at reception said I’m in the ‘Boardroom Suite’. I thought to myself “weird name”, then walked into this… ???? pic.twitter.com/9LfMRybGUl

For those questioning the authenticity, there was an actual listing on their website called “1 Queen Bed, 1 Bedroom Conference Suite” going for close to $1,000 a night. There was also a Presidential Suite listing which included a bedroom and adjoining family room for a similar price.

The listing has since been taken down (most likely from the unwanted attention brought on by social media). As noted in an Insider article, the hotel in question was independently operated under the Comfort Inn name, which may explain the not-so-standard bedroom configuration.

In an email, Alannah Don, project manager of public relations for Choice Hotels said, “while all the hotels in our system are independently owned and operated, we expect all franchised hotels to comply with brand standards to ensure each guest enjoys superior service and a great hotel stay.

“Based on the photo shared, we will be reviewing the suite design with the hotel’s owners to ensure that it complies with our brand standards.”

From the replies to Carrigan’s tweet, it seems these type of occurrences occur more often than one would think.

This is the room I was offered at the Westin in Ottawa a few weeks ago when there was no room avail for me. No shower, but at least there was a twin sized roll out cot at the end of the 12 person boardroom table? pic.twitter.com/r3R72WyZox

Yes but have ever stayed at the Richmond, Indiana Holiday Inn jacuzzi suite? pic.twitter.com/PSqfv2OE5e

Been there done that. pic.twitter.com/jzdwyO3BjK

Meagan and I decided to stay downtown tonight as we were at sybergs on market street, so we went to the hotel that was attached and they said they had one room left, so of course we took it. And it’s executive af ???????? pic.twitter.com/PITjnsFvTH