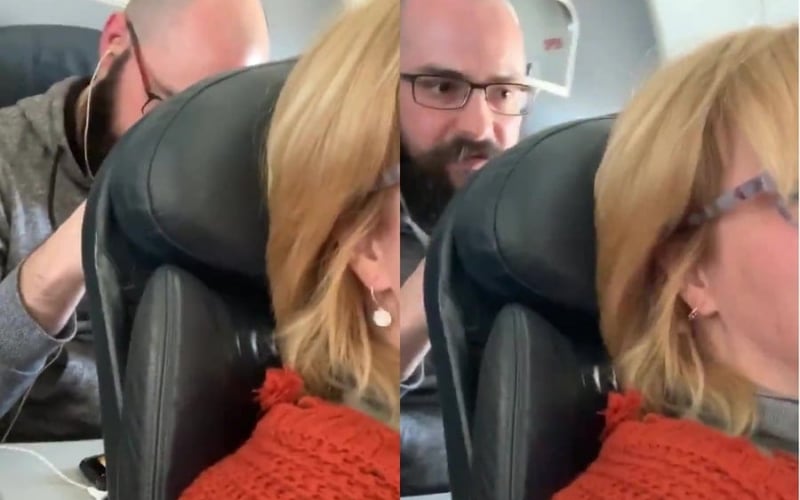 The internet is split once again over the etiquette behind reclining seats on an airplane, after one woman’s video of a man shaking her seat went viral.

Wendi Williams did not know she would be in for the shock of her life when she was flying from New Orleans, Louisiana to Charlotte, North Carolina on board an American Eagle flight (operated by Republic Airways) on January 31, 2020.

According to Williams, the gentleman behind her started to “punch” her seat. When she started to film him, he resorted to shaking the seat instead for the rest of the time until a flight attendant was called.

In the tweet, she said, “here’s a great jackhole! He was angry that I reclined my seat and punched it about 9 times – HARD, at which point I began videoing him, and he resigned to this behavior.”

From her series of tweets, it appears the incident started when he asked her to bring her seat to an upright position as he was eating.

“The man asked me, with an attitude, to put my seat up because he was eating. I did. I then reclined it again when he was finished. At that point, he started hammering away at me. That’s when I started videoing and tried to call the FA.”

When the flight attendant was called to the scene, William alleged that instead of addressing the situation with the traveler behind her, she was instead told to put away the camera as filming was not allowed on board. She also said that he was also offered an alcoholic drink.

“When the FA came. She rolled her eyes at me and said, “What?” She then told him it was tight back there and gave him rum! She told me I had to delete the video! It’s against the law to video on a plane. I asked her name & She gave me a Passenger Disturbance Notice!”

She even mentioned being in pain after the incident.

“I’m in pain. I have 1 cervical disk left that isn’t fused – the first 1 which allows me some mobility. It’s scary bc it’s this the kind of injury that could do it in. I am grateful for the limited movement I still have and shouldn’t have had to endure the repeated blows #whiplash”

American Airlines chimed in to find out more about the situation.

Hi, Wendi. Your comments concern us and we'd like to look into this. Please DM your record locator and details.

Unfortunately the bearded man has not come forward to represent his side of the story, so we will never really know what really set off the whole chain of events.

Even though Williams posted the video to Twitter in an effort to drum up support for her dilemma, it appears as if the plan backfired as many people sided with the man’s actions.

In one tweet, Michael said, “when you recline you’re invading the space of the other passenger and ruining their experience. You’ve had a shocker here Wendy.”

Heather also replied saying, “you are both in the wrong. But reclining your seat when you are flying coach is literally the most selfish inconsiderate thing a person can do. It literally ruins the travel experience of the person sitting behind you. You are just as bad if not worse then him.”

Ferg also added, “Thank you for giving the world a brilliant example of the lengths people such as yourself will go to rather than just being a little courteous. Wholly avoidable situation had you just perhaps acted like you’re beyond the age of being potty trained.”

Then there were those supporting her.

Melissa said, “It’s ridiculous for ppl to say you shouldn’t recline your seat. It’s an option for a reason. You’re fully within your right. If he needs more room, he should have gotten a seat that accommodated that. Why should you be inconvenienced? You paid for your seat.”

Eric replied, saying, “This man is literally the worst human in the world and anyone who is calling him a hero or defending him is a giant LOSER that doesn’t know if a seat can recline, then you are 100% allowed to recline.”

Salvatore said, “Using a standard function for the purpose it was meant for isn’t an excuse for this man to bully you into submission. Shame on AA. Would he have done this to another man?”

So what’s the 411 on reclining? As airlines continue to reduce seat pitch in economy, the issue of reclining seats has definitely been a hot topic for debate. From a technical standpoint, you are free to recline if the option is there as it’s a feature offered with the seat you paid for during the flight.

However, respect should go both ways. If you want to recline, do so only when you have to (e.g. when you’re sleeping). When pushing back the seat, do it in a gentle manner so that the seat back does not slam into the knees of the passenger behind you or throw down what’s on their tray if it’s in use.

The same respect can also be applied from the man’s point of view. While he did ask her to put her seat back up, he should have instead taken it up with a flight attendant if he felt his space was being encroached on instead of passive aggressively shaking her seat.

With regard to the flight attendant’s response, they FA would have been right in telling the woman to put away her camera as filming other passengers is against policy. However if Williams’ account is truthful, it does not appear as if the flight attendant’s priorities were correct as they did not do enough to control the situation. At no time is it alright to shake someone’s seat because you aren’t pleased with the limited leg and tray room.

Tell us what you think about the situation and should be done with respect to reclining seats.