Portland Traveler Plugs PlayStation Into Airport Monitor, And Even Asked To Finish His Game When He Was Told To Stop 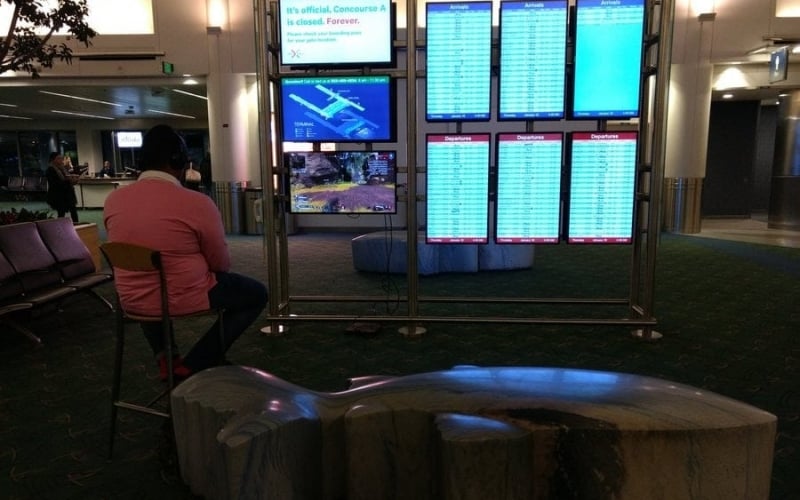 Seeing travelers plugging into power outlets to juice up their phones and laptops isn’t out of the ordinary, but one traveler at Portland International Airport took it a step further.

The man disconnected one of the airport monitors at the gate so that he could plug his PlayStation 4 in to play games. The photo was snapped by Stefan Dietz, another traveler, around 4:30 a.m.

“I couldn’t believe it. You’ve got all these monitors there and he’s playing a video game,” said Stefan Dietz in a CNN report. The gamer obviously was having quite an intense multiplayer session as he also had a headset on and could be heard talking to other gamers via his microphone.

This guy has his video game plugged into one of the airport monitors.
Seen yesterday at @flypdx. pic.twitter.com/9bTqc9i2Ya

Kama Simonds, a spokesperson at the Portland airport, said that officials received quite an unexpected response when they asked him to stop.

Simonds said, “he politely asked personnel if he may finish his game,” to which he received a resounding “no”.  She added that, “we would love travelers to plug into our power outlets, but just ask that they don’t plug into anything else.”

The gamer was complaint and disconnected his system from the monitor, which usually would have displayed an airport terminal map showing gate and restaurant/shop locations.