Oops! This Guy’s Laptop Was Smashed After The Passenger In Front Reclined Their Seat 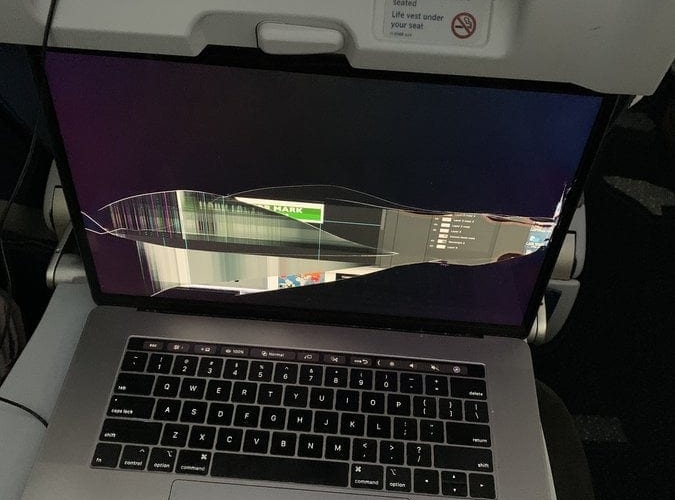 Pat Cassidy, co-anchor of the Hard Factor podcast (part of the Barstool News Network), had a very, very bad travel day about a week ago while traveling with Delta Air Lines.

He posted a tweet directly to the airline, giving a “suggestion” about a potential flaw with their aircraft seat design when they were in the reclined position. In the tweet, he says, “small note for the suggestion box, maybe have a little warning sign or someway to prevent my laptop from being destroyed when the person in front of me reclines their seat.”

It turns out that Mr. Cassidy’s laptop screen got caught in the lip of the tray table holder when the person in front of him reclined their seat. Unfortunately the screen got cracked in the process, turning his laptop into a really big paper weight.

@Delta small note for the suggestion box, maybe have a little warning sign or someway to prevent my laptop from being destroyed when the person in front of me reclines their seat. pic.twitter.com/QHmphXiDhH

In a few follow up tweets, he also criticized the airline’s staff for not taking the situation too seriously.

“Also, this one is more of a critique than a suggestion. I really appreciate that your flight attendant came over to tell me that the passenger in front of me “needs to be able to recline” and then asked him “if he was okay?” as if your seat hadn’t just ruined my livelihood.

He also appeared to be serious about getting some kind of compensation for the damaged MacBook.

“Silver Medallion Member here, how many SkyMiles is a brand new MacBook Pro?

“Let me know who I can email about this? You’ll know it’s me because the bottom of the email will read “sent my from iPhone””

Delta did issue an apology on behalf of the “actions” of the other reclining passenger, but said they could not reimburse the cost of the damaged laptop as it was caused by another passenger. They did give Mr. Cassidy 7,500 Sky Miles as a good gesture though.

Update: @Delta is giving me the equivalent of a $75 gift card and an explanation that you would give a six year old. Cool. pic.twitter.com/etGLUXOOjs

Apparently this is not the first time this has happened as another flyer suffered a similar fate, but was able to get his MacBook replaced via Apple Care.

So this happened on my flight home… pic.twitter.com/FQx7lS2ejT

Most of the replies to Cassidy’s tweet put the blame solely on him as they felt the laptop should not have been propped up on the seat back. In his defense, the laptop screen did not necessarily have to be tucked under the tray table holder lip, but could have gotten caught as the seat was reclined (I assume rather quickly). Given the small space as well, the screen most likely would have had to have been tilted quite far back to be in decent enough of a position for comfortable viewing.

Unfortunately I stand with Delta on this one. I think at the end of the day, if we started putting warning signs for every potential problem, there would be more signs than seating space. However, I would always recommend that any passenger slowly recline their seat so as to avoid slamming it into the passenger’s knees, or throwing down their drinks. In this case, smashing someone’s laptop screen.

If you’re using a laptop on a tray table, you may been to pull it as close to you as possible, or just use it in your lap to avoid any potential damage.