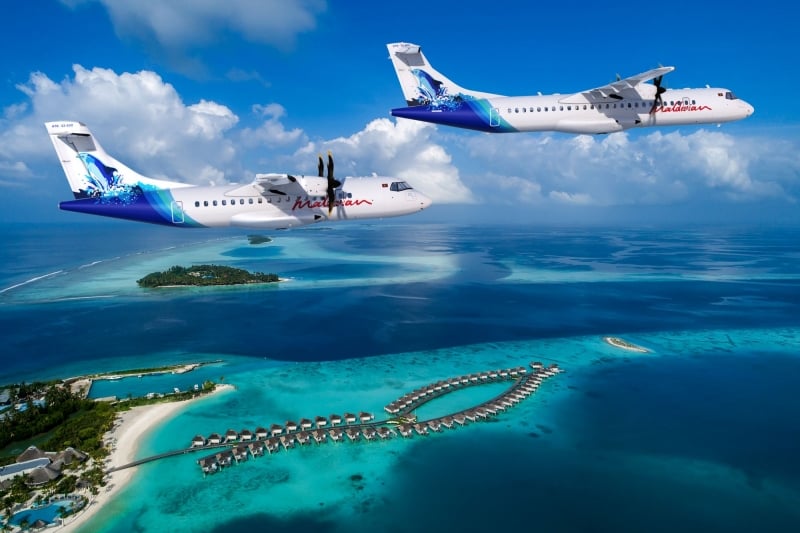 Maldives-based airline Maldivian has placed an order for 3 new ATR aircraft to begin the process of replacing its older fleet of Dash 8 aircraft.

Maldivian which is run under government-owned entity Island Aviation Services Limited, operates flights throughout the Maldives archipelago, and to international destinations such as Bangladesh, India, China and Thailand. The airline is now looking to phase out its aging Bombardier Dash 8 Q200s and Q300s in favor of two ATR 72-600s and one ATR 42-600. The new ATRs will be used to operate domestic routes to the larger Maldivian islands, and will be power by ATR’s recently introduced PW127XT engines which save 3% more fuel and reduce maintenance cost by as much as 20% over previous models in the 42 and 72 line.

Mohamed Mihad, Managing Director of Maldivian, said: “We are pleased to take this next step in our expansion plans with ATR. We believe the new generation of ATR aircraft with the XT engines offer something we have been looking for in our fleet modernization, taking a step towards sustainability while keeping an eye on the operating costs as well as enhancing the cabin modernity and passenger comfort.”

Stefano Bortoli, ATR’s Chief Executive Officer, stated: “Despite the current pandemic, operators are looking to the future, and this contract is a strong symbol of the resilience of the aviation sector. Our aircraft have proven their reliability by linking up the islands of many archipelagos for almost four decades; we welcome Maldivian as a new customer and we are proud to contribute sustainably to the modernisation and expansion of the flag carrier of the Maldives.”

Currently, the airline operates two Dash 8 Q200s and eight Dash 8 Q300s, along with an Airbus A320 and A321, as well as 11 de Havilland DHC-6 Twin Otters which are used to transport people to and from the atolls within the archipelago. The airline also wanted to expand its foot print back in 2019, announcing intentions to take on two Airbus A330 aircraft, but it seems that decision has been put on hold due to the pandemic. They aimed to tackle additional markets including South Africa and Europe in the hope of bringing in more traffic to the island chain paradise.