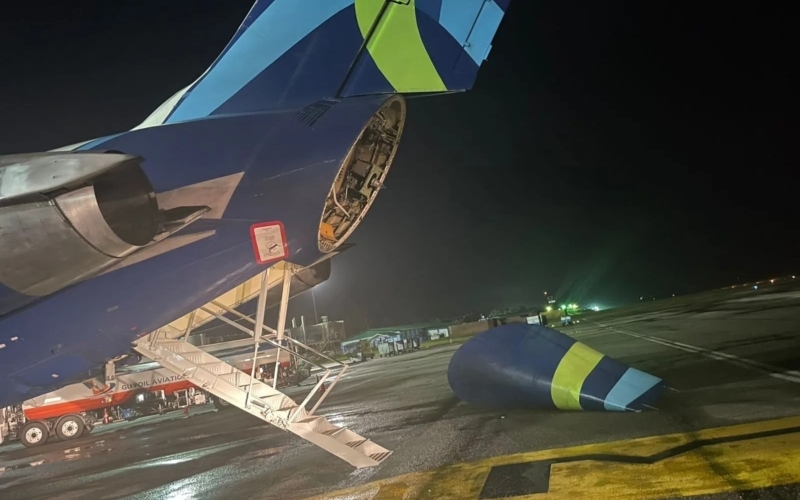 Whoops! Two ground crew members at the Cheddi Jagan International Airport in Guyana were injured by the tail cone of a McDonnell Douglas MD-83 after it was accidentally jettisoned.

On June 28, 2022, a Surinam Airways flight PY422 (operated by a World Atlantic Airways McDonnell Douglas MD-83 registered as N807TR) landed in Georgetown (GEO), Guyana after flying in from Oranjestad (AUA), Aruba. During the deplaning process, ground crew attending to aircraft accidentally pulled the tail cone jettison handle instead of operating the rear staircase switch. As a result, two people standing under the tail section suffered minor injuries when the cone fell on them.

The flight which was supposed to continue on to Paramaribo (PBM), Suriname was canceled, and stranded passengers were re-accommodated. The matter is being investigated by World Atlantic Airways, and the report should be passed on the Surinam Airways. The aircraft was parked for one day to have to tail cone reinstalled, and re-entered service on June 30. Speculation would point to the ground crew lacking familiarity with operations of the MD-83.

The tail cone can be easily deployed from both inside and out, in case of an emergency. Under normal circumstances, when the handle is pulled, the tail cone falls and pulls the evacuation slide with it, allowing passengers to exit through the rear once the slide inflates. In this instance, it is unclear why no slide was deployed. Here is an informative video about how the slides (and tail cone) are deployed.