Emirates Unveils A380 Premium Economy Cabin, Along With Small Upgrades To Other Cabins 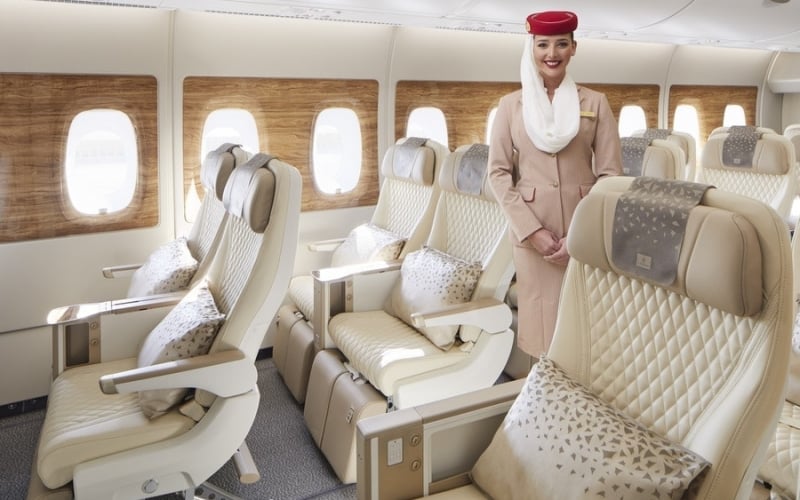 Emirates has finally revealed its first premium economy cabin featuring its own customized RECARO PL3530 seats. Prior to today’s release, it was speculated that Emirates would have launched with HAECO’s staggered Eclipse seats, which are a hybrid of business class and premium economy seating. In HAECO’s April 2019 release, they hinted that the product would be launched via a middle eastern carrier, but it seems now that Emirates was not the choice.

Their new cabins feature a toned down color scheme, with lighter seats and faux wood finishes on the tray tables and window panels. The new PE cabin was installed on its most recently delivered A380, and is initially expected to be installed on the last five remaining A380 deliveries in the upcoming year.

The airline is still looking at market demand and will then decide if the rest of the A380 (and how much) should be retrofitted to line up with the new offering. They also expect to include the product on their upcoming Boeing 777X aircraft expected for delivery starting in 2023.

“The Emirates A380 is already one of the most sought-after travel experiences in the skies, and now we’ve made it even better. While others cut back, Emirates is working hard to restore the products and services that we’ve had to suspend or adjust due to pandemic precautions, and introduce new offerings and enhancements. True to our fly better promise, Emirates continues to invest to offer our customers the best possible experience.”

Located on the front of the lower deck, the new PE cabin features a total of 56 seats spread out in a 2-4-2 layout. The 19.5 inch wide seats will offer 40 inches of pitch and 8 inches of recline along with a foot rest and calf support. The seats include a faux wood tray, side cocktail table and charging ports.

There is also a 13.3 inch TV display which connects to Emirate’s ‘ice’ in-flight entertainment system. 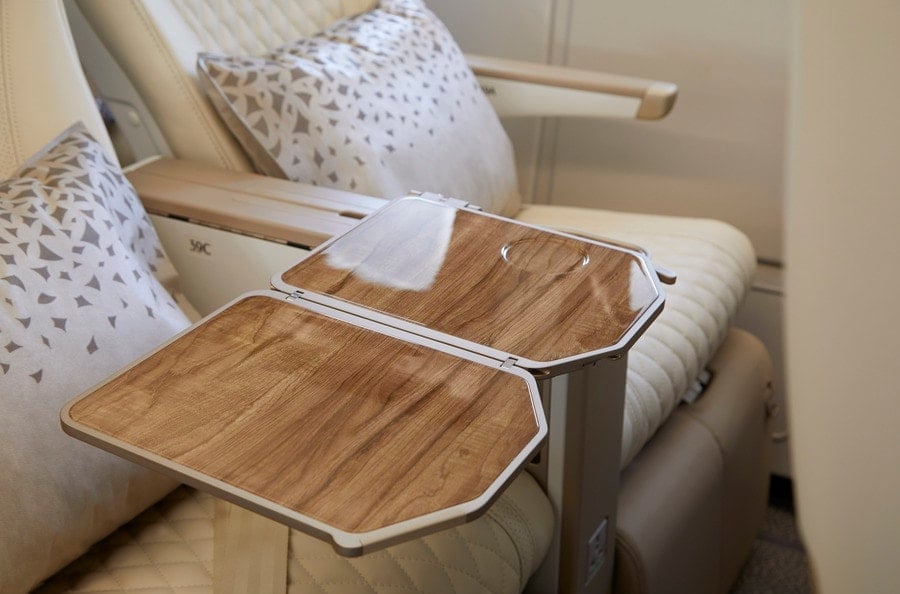 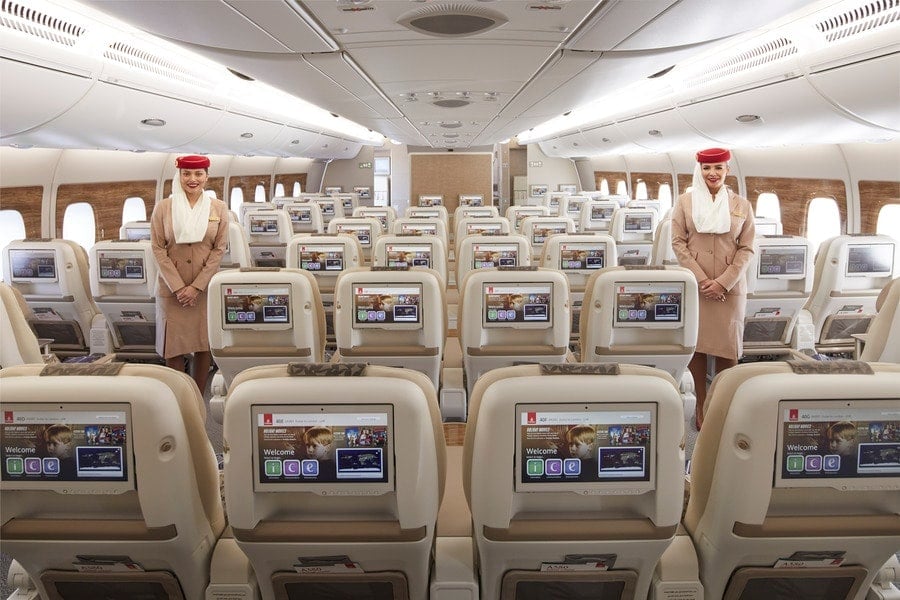 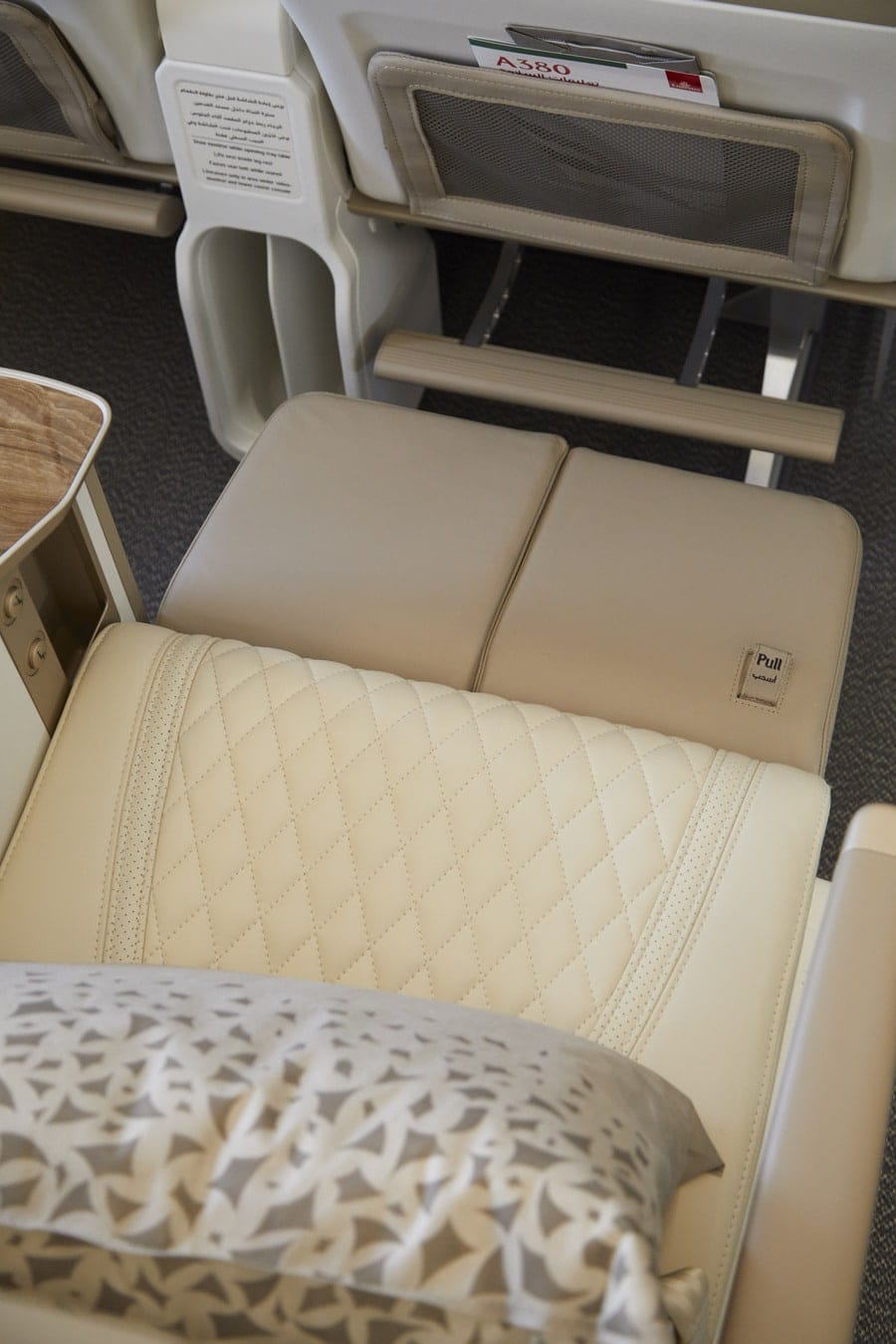 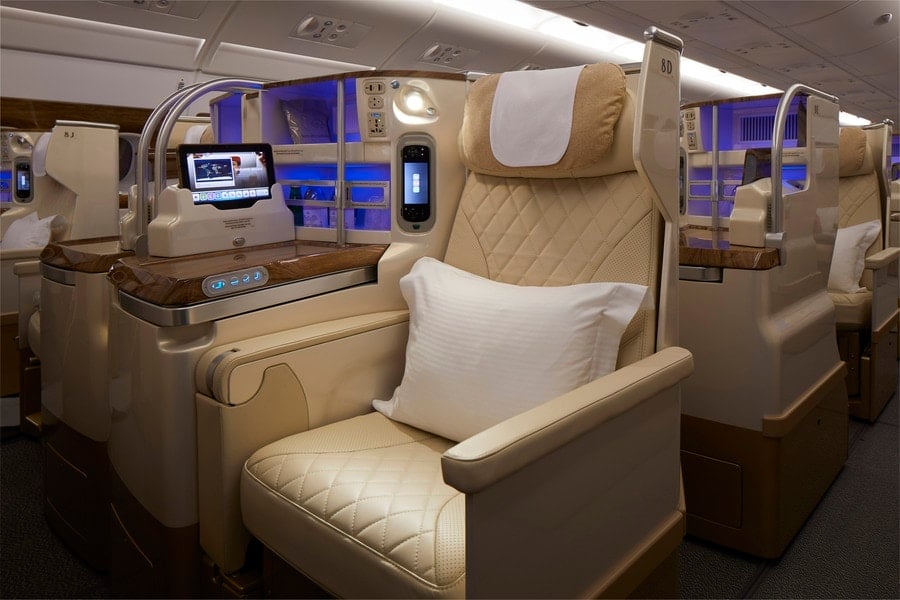 Free upgrades in the interim

Until enough premium economy capacity is included in their inventory, they will be offering them as free upgrades on different routes to let customers get an idea what the new product is like.

“Until we have a viable number of seats in our inventory to bring to market, we plan to offer the Emirates Premium Economy experience as a complimentary upgrade to valued customers. We’ll also deploy our newest A380 aircraft on various routes so that our customers can experience our latest offering in all classes.”