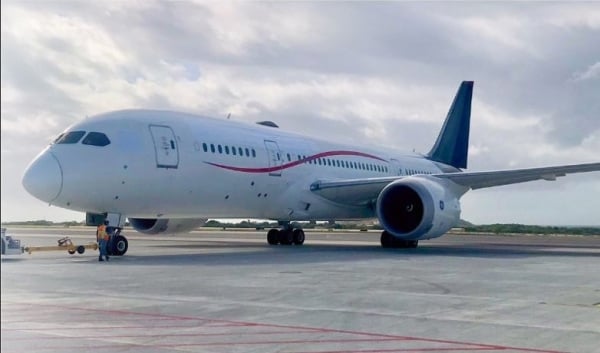 Over the past month, eagle-eyed aviation enthusiasts spotted a very busy private Boeing 787-8 Dreamliner performing flights across the globe, with one of them being over 20 hours long.

The almost 8-year old Aruba registered aircraft (P4-787) in question belongs to private charter company Comlux Aviation. It previously flew for Aeromexico as N961AM and was returned to its lessor at the start of 2021. The aircraft was initially speculated to go to Euroatlantic, but those rumors were quashed after it was revealed it would take on a new life as a private charter.

From February 14, the aircraft performed a number of short hops around Argentina before stretching its wings and flying to various parts of the globe including Luqa, London Stansted, Zurich, Copenhagen, St. Petersburg, The Maldives, French Polynesia, Auckland, Guam, Seoul and Osaka. Below is a map of its destinations over the past month and a half. 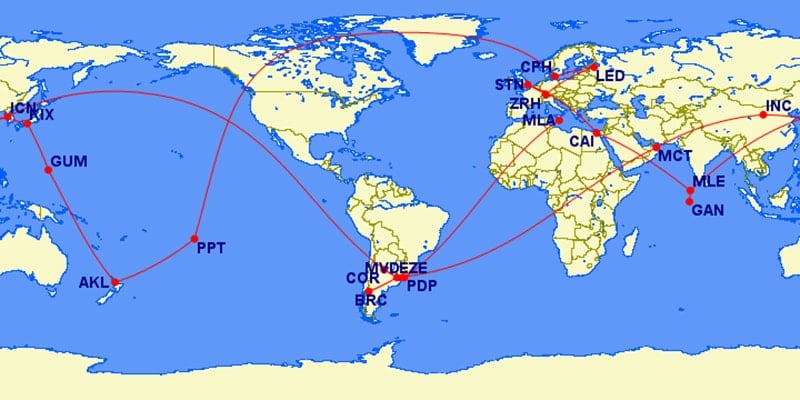 Looking at the destination map, one might think nothing of it as business jets can go almost anywhere the customer wants, but based on March’s activity alone, this aircraft has been very busy, not spending much time in any particular destination. In some cases, the aircraft visited two cities per day, and touched down in three on March 22. The only noticeable break was between March 23rd and 26th when they stopped in the Maldives. Maybe some sea, sun and sand?

On March 28, 2021, the aircraft flew its longest leg, going from Seoul, South Korea to Buenos Aires, Argentina, racking up 20 hours and 19 minutes of flying time. Comlux celebrated the feat by tweeting that they were able to perform the longest non-stop flight ever recorded, flying 10,520 nautical miles (12,106 miles). We’re not sure what definition they’re using to declare their record as Boeing took the title for longest non-stop flight on November 10, 2005, flying 11,664 nautical miles (13,422 miles) in a 777-200LR in 22 hours and 42 minutes. Maybe they meant longest 787 flight?

However, the charter company can boast about flying between two antipodes.

Why was Comlux performing these flights?

While it’s none of our business why the charter company performed any of these flights, the aviation community will always be curious.

Comlux’s CEO Andrea Zanetto confirmed that the flight was set up for a client, and was manned by six pilots in rotation, with one engineer looking on. Zanetto also confirmed speculation that Argentinian-Italian actor Enrique Piñeyro made up one of the six pilots on the trip.

He said, “great achievement by Captain Enrique Piñeyro and his six crew members! We are proud to support them with our dispatch team!!”

Piñeyro has a wide range of talents under his belt, working as an actor, film producer and director. He is also a pilot, air crash analyst and aeronautical physician. He is qualified to fly the Saab 340, Boeing 737 and Boeing 787.

What we aren’t sure about

Initially it was speculated that the private jet was being used to ship COVID-19 vaccines across the globe, but Piñeyro’s tweets sparked a new theory that he may have chartered the jet as part of a new film he might be working on (given the number of stops in such a short time).

Twitter sleuths then noticed that the transponder code on the aircraft was recently shared with another San Marino-registered Boeing 737-700 BBJ (registered T7-MAK), which is owned by Russian billionaire Igor Makarov. Maybe Makarov was taking a world tour vacation? With no concrete evidence to confirm if he is indeed the person chartering this aircraft, it’s still one of those  aviation mysteries that will leave us scratching our heads.

Headquartered in Zurich, Switzerland, Comlux manages a number of heavy metal private charters, operating a Boeing 767-200ER, Boeing 777-200LR, 5 Airbus A319CJs and a number of small Bombardier jets. Their fleet is registered across 4 countries including Switzerland, Aruba, Kazakhstan and Malta.

The name Comlux might not ring a bell, but their 777-200LR is used by Crystal Cruises as part of their Crystal Skye charter world tour packages. The aircraft is configured with 88 first-class styled flat-bed seats with a large bar and four dining tables (among other amenities).