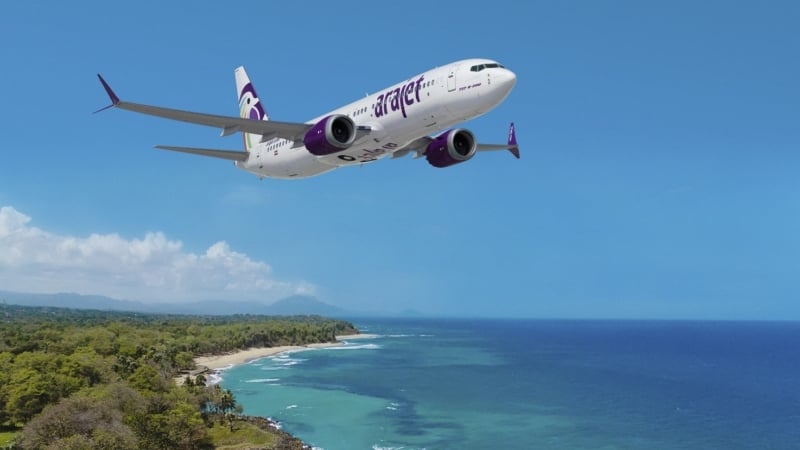 Dominican Republic-based Arajet is on a roll, placing another order for 20 Boeing 737 MAX 8s, this time choosing the higher capacity 737-8-200 variant.

The start-up Caribbean airline previously ordered 5 MAX 8s, taking delivery of its first in early March 2022 (registered HI-1026). The new order which consists of 20 737-8-200s with an additional 15 options, could potentially bring the low cost carrier’s fleet up to 40 aircraft in the medium to long run if they fully exercise their options.

“The efficient Boeing 737 MAX, together with financial and operational support from our partners at Griffin and Bain Capital, gives us the solid foundation necessary to provide flights at affordable prices to travelers in the region,” said Victor Pacheco Mendez, founder and executive officer of Arajet. “These partners believe in our vision and see the same bright future for this market and beyond. The entire team was elated to see our first aircraft arrive in Santo Domingo a few days ago, and we are eager to expand our fleet with more of these amazing jets in the months ahead.”

The new order was announced as part of its launch ceremony on March 14. The airline plans to use its tactical position between the United States and South America to offer low connecting fares for those living in major and underserved cities in countries in the Caribbean, as well as the U.S., Brazil, and Colombia. According to an earlier filing with the Dominican Junta de Aviacion Civil (JAC), the airlines has applied to fly to the following destinations.

According to Arajet and the JAC, the airline is set to begin operations at the start of 2022 with its hub based at the Las Américas International Airport (SDQ) in Santo Domingo. The new entrant will be facing competition from brands like Sky High Aviation Services and newly established virtual airline Sky Cana. Arajet will also be going up against big names across most its destinations including American, JetBlue, United, Aeromexico, Copa, Avianca, Air Caraïbes and others.