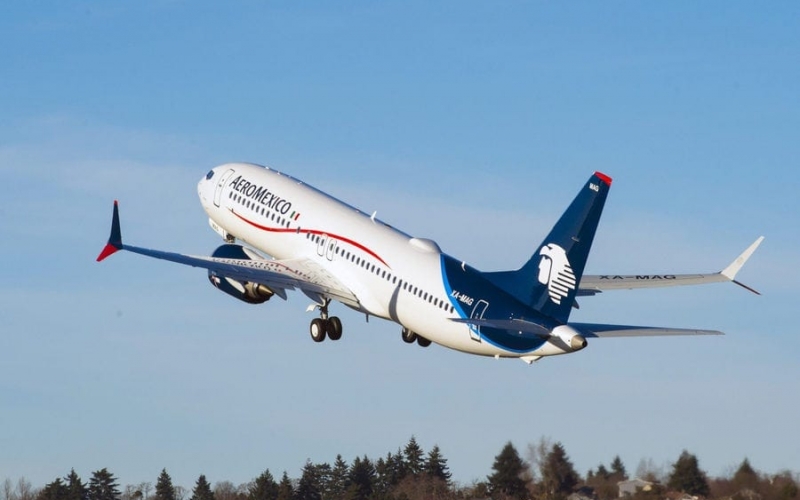 After initially planning to re-introduce their Boeing MAXs back into commercial service on December 21, Aeromexico was able to jump ahead resuming flights three days earlier than expected.

Aeromexico which currently has a fleet of 6 Boeing 737 MAX 8s (with many more to come in the future) restarted commercial MAX flights on December 18 with service from Mexico City (MEX) to Cancun (CUN). This comes after GOL’s reintroduction on December 9, making it the second carrier to get the jump ahead of those (namely American Airlines) operating in U.S. airspace.

From the flight records, at least two MAX 8s (XA-MAQ and XA-MAO) have already commercial started service, with the others already completing test flights and showing scheduled slots for future flights. The airline hope to have them running on as many domestic routes as possible out of Mexico City to cities including Tijuana, Cancun, Monterrey, and Guadalajara.

In a press release, the airline said:

On November 18, 2020, the Federal Aviation Administration(FAA) issued the Boeing 737 MAX aircraft certification for its return to commercial service.

Aeromexico has coordinated with Boeing and the Federal Civil Aviation Agency of Mexico (AFAC), all the necessary procedures and tests to add these aircraft into operations.

In adherence to the requirements established by the corresponding authorities and Boeing, the pilots have completed the training to fly this aircraft since it had modifications mainly in its operating system.

“As a pilot and Grupo Aeromexico representative, I am very proud to welcome back into our operations one of the most efficient, modern, less polluting and safest aircraft in the world. Our pilots, technicians and all airline employees are ready to fly, and we appreciate the detailed assessments that AFAC has carried out to guarantee the safety and strict compliance with all the requirements”.

As it stands, Aeromexico has already taken delivery of 6 MAX 8s, with 54 outstanding split between the -8 and -9 variants. Tentatively, the they are looking at taking on 44 more -8s and 10 -9s, but they may mix and match as time goes by.

The MAXs could not come at a better time as the airline is dealing with bankruptcy, filing for Chapter 11 protection in the United States at the end of June 2020. According to earlier statements, Grupo Aeromexico SAB said that the airline will “continue operating and use Chapter 11 as a way to strengthen its financial position and liquidity” with the aim of “protecting and preserving its operations and assets and implementing the necessary operational adjustments to face Covid-19-related impact.”

To keep track of all the airlines currently operating the Boeing 737 MAX in commercial service, check out our summary here.