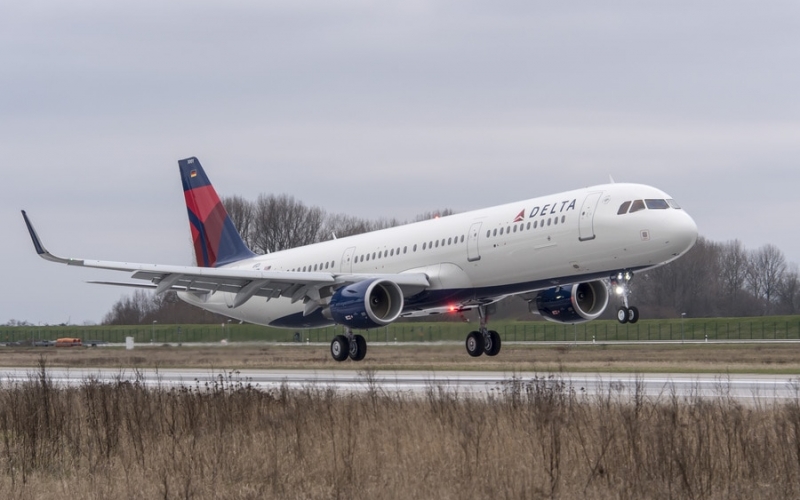 As infection rates decline globally, the travel industry can finally breathe a sigh of relief as air travel numbers slowly return to pre-pandemic levels. Besides re-hiring pilots and crew members, airlines have begun the process of bringing out *most* of their birds from storage.

Delta Air Lines First Officer Nick Perez was part of a crew tasked with shuttling one of the fleet’s parked Airbus A321s from Victorville to its Minneapolis/St. Paul hub. He was not expecting to find a letter from the previous pilot written 435 days before, just around the time when the pandemic started.

As Perez looked around the flight deck of ship 3009 (registration N309DN), he saw a note with “Check the tray table” written on it. As he flipped up the tray table, he saw a letter written by Chris Dennis, another one of Delta’s First Officers. The letter was written on March 23, 2020 or about 15 months before, just when the pandemic set in. According to TSA figures, U.S. travel throughput was obliterated around that time, seeing just 279,018 passengers transiting through a U.S. gate on March 23, compared to 2,151,913 that same day in 2019.

While Perez was on a mission to bring aircraft back into service, more than a year before, Dennis was helping park aircraft for long term storage, with no idea when aviation would pick up again. In his words, he described the situation as “chilling”.

In the letter, he wrote:

It’s March 23 and we just arrived from MSP. Very chilling to see so much of our fleet here in the desert.

If you are here to pick it up then the light must be at the end of the tunnel.

Amazing how fast it changed.

Have a safe flight bringing it out of storage! 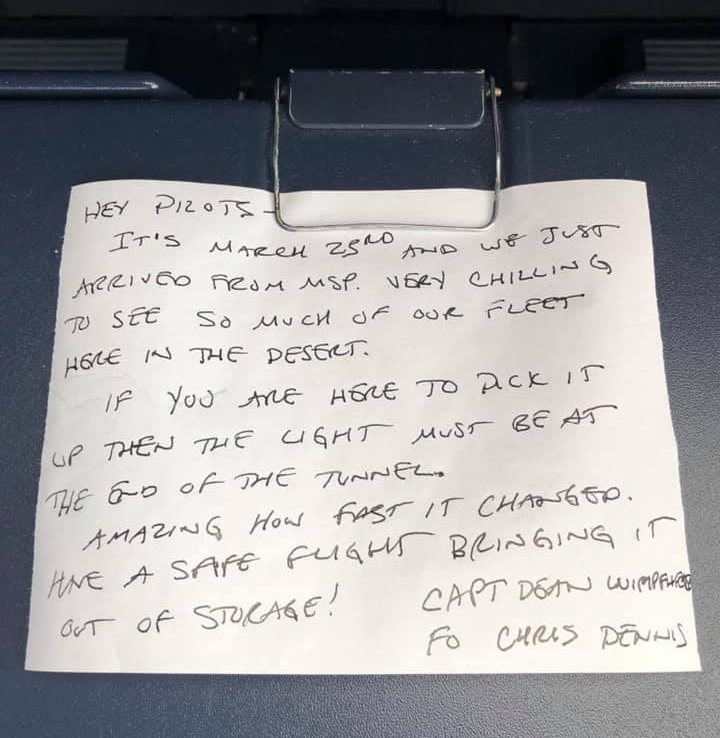 Dennis remembered entering a very empty MSP terminal, with plans to fly the A321 to the Victorville aircraft storage facility, knowing fully that it was not another regular day in the office.

“We pushed back with the ground crew; the terminal was empty. It felt desolate,” he said.

“It wasn’t until we were on final approach headed in for landing when it hit me,” Dennis later recalled. “The VCV instructions noted to go behind a ‘follow-me vehicle’ that brings you to a parking spot. As we crossed the runway: Delta aircraft. It’s hard to fathom how many aircraft Delta has until you see that many of them parked in one place.”

“When we got in line, it looked like an optical illusion. It just kept going and going,” Dennis said. “I don’t know how to describe it – it was shocking.”​

“I thought about how many people’s jobs rely on just one of those airplanes,” Dennis said. “From the Reservations agent, to the ticket agent, to the pilot, flight attendants, mechanics, the ramp crew. Then you go a level deeper: the rental car agency, the hotels, the tourism companies.”

Many thought COVID would have been a two week affair. Even the airlines speculated that the situation could be controlled in a short time. What Delta thought would be a two week break, turned into weeks and eventually months (for ship 3009 at least) before it was finally earmarked for preparation to be brought back into service.

On June 1, 2021, Perez and other team members completed final checks and returned the aircraft to its true home at a now busier Minneapolis/St. Paul. N309DN is currently undergoing final preparation works before it is put back into commercial service.