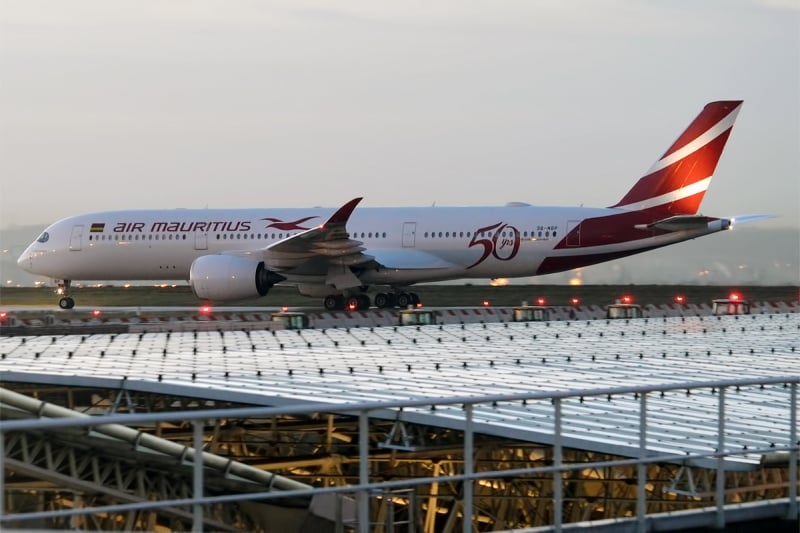 Two Air Mauritius Airbus A350 flights headed in opposite directions narrowly avoided a mid-air collision as a result of what appears to be air traffic controller negligence.

On January 6, 2022, Air Mauritius flight MK42 was headed to London Heathrow (LHR) from Port Louis, Mauritius (MRU) at 38,000 feet. While in Sudanese airspace, the crew requested a step climb to 40,000 feet as a fuel saving measure. The request was authorized by the Khartoum controller and the aircraft began climbing to its new altitude at 23:01 UTC. Around the same time, Air Mauritius flight MK15 was headed in the opposite direction to Mauritius from Paris Charles de Gaulle (CDG) cruising at 39,000 feet on the same airway.

Based on tracking data, at 23:03 UTC, flight MK42 crossed 39,000 feet, putting the aircraft on a collision path with flight MK15, with just 800 meters (0.43 nautical miles) of horizontal separation. Thankfully the Traffic Collision Avoidance System (TCAS) on both aircraft alerted the respective crews of the impending conflict. At 23:04 UTC, the pilots of MK15 quickly descended to 38,600 feet while MK42 expedited its climb to 40,000 feet. TCAS works independently of air traffic control services by scanning the environment and communicating with other TCAS-equipped aircraft with active transponders, constantly assessing various proximity readings to reduce the risk of mid-air collision (MAC).

The close call was later confirmed by Air Mauritius in a press release.

On the night of January 6, 2022, the minimum spacing required between two aircraft of the company was reduced over the airspace of Khartoum (Sudan). The two Airbus A350-900 planes were operating respectively flights MK015 from Paris and MK042 to London. The control tower (ATC) gave its agreement to the crew of flight MK042 to change altitude and it is during the climb that the incident occurred. The aircraft being equipped with TCAS, the warning and avoidance systems worked. An investigation is underway to determine the origin and causes of this situation.

According to news reports, there were about 400 passengers between the two flights, completely unaware of how deadly the situation could have turned out, had both aircraft not been equipped with collision avoidance technology. As mentioned in the release, a formal investigation was launched to determine how the conflict was allowed to happen.

Even though air traffic controller errors occur few and far apart these days, with lack of proper radar coverage in the region, controllers would have to rely on procedural techniques to keep track of traffic. From the shreds of data provided so far, it seems the controller did not properly estimate when both aircraft would cross paths before giving MK42 the clearance to step climb.