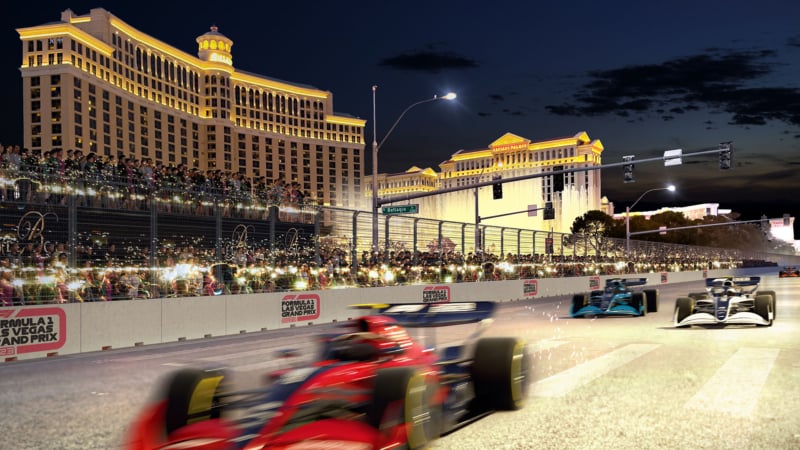 Now that the cat’s out of the bag, Formula 1 fans have already started researching the ins and outs of visiting Sin City for the coveted November 2023 event.

According to several sources and leaked documents, Formula 1 is set to come to the Las Vegas streets between November 16-18, 2023. Unlike all other races, the race weekend starts a day early because of how far west the track is located, and will take place late at night to cater for F1’s European viewing audience. In the leaked letter, the main event will take place on November 18, 2023 at 10 p.m., and all track activity will end at 1:30 a.m. PT the next morning.

Formula 1 has also opened their pre-registration portal. Potential attendees can register in order to access pre-sale tickets and packages before they go on sale to the general public. Pre-registration does not guarantee a ticket, but it does put you higher on the priority list when pre-sale tickets do become available. You can pre-register by donation $7.77 towards the Las Vegas Grand Prix Foundation.

Some fans like myself plan to buy tickets just for race day, with the hopes of securing a hotel room to see free practice and qualifying action from a balcony near the circuit.

Those following the news from day one would have noticed slight adjustments made to the track in early September. The course which originally had 14 turns, now has 17, with the bulk being at the start (turns 1 through 4) and around the MSG Sphere (6 through 9). The remaining turns lead onto Sands Avenue, bending around the Palazzo Tower.

From there, it’s mostly high speed action will take place on South Las Vegas Boulevard running from Sands Avenue down to turn 14 onto Harmon Avenue, before returning to the grand stands just after Koval Lane. The corner next to the Cosmopolitan was also adjusted to include one additional turn. The turn at Audrie Street has also been removed, allowing drivers to go full throttle before making the final turn towards the finish line.

According to the promoters, drivers could hit top speeds of 342kph (212mph) down Las Vegas Boulevard, with some teams predicting topping out at 370kph (230mph) with DRS. 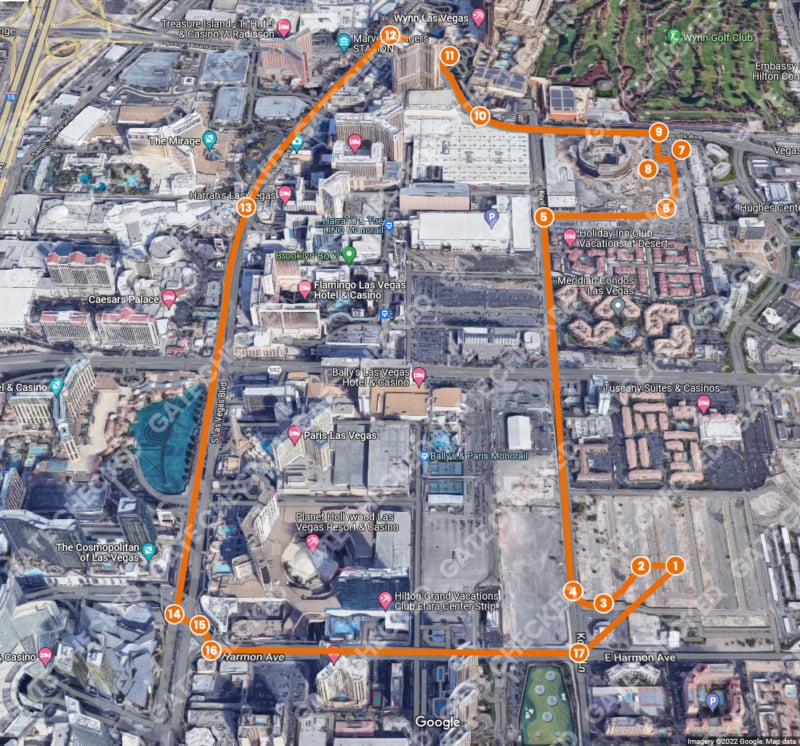 Which hotels to stay at for good views at F1 Las Vegas?

If you’re not budgeting to buy tickets for the entire weekend, or prefer to take in the action from your hotel room, these are some of the better options to pick from. Not all rooms are created equally though, as some have balconies while others are limited to just window views. Some have really good vantage points while others are simply too far away from the street. This list will categorize some of the major options into three brackets depending on the overall vantage point and ease of viewing the track.

Demand for hotels will be at an all-time high, so you will have to plan to book as soon as spaces become available (at least one year out). Staff at the Wynn Las Vegas and Encore reported that their websites saw record traffic levels when it was announced that F1 was coming to Sin City.

This list will continuously be fine tuned as more information about the event is made available.

Hotels with the best views for F1 Las Vegas

The Cosmopolitan of Las Vegas

I suspect the Cosmopolitan may be one of the most in-demand hotels because of the amazing views of both South Las Vegas Boulevard and Harmon Avenue. This means you will be able to see the cars racing from turn 12 all the way through turn 16 and beyond. Unfortunately the Elara blocks the rest of the straight down to turn 17, but it’s a small sacrifice given how much you can see otherwise. Guests attempting to book here should aim for the Wraparound Terrace Suite or the Wraparound Terrace Suite Fountain View in the tower closest to the strip on the higher floors.

The lower floors may have restricted views further down the strip, so make sure your eyes are in order before you visit. The video above appears to be taken from the larger tower closer to Aria, but the views still seem to be pretty good besides the section blocked by the strip side tower. Like with many hotels, rooms won’t become available until within 12 months from the date, and I suspect these rooms may come at quite the premium.

The Signature at MGM Grand 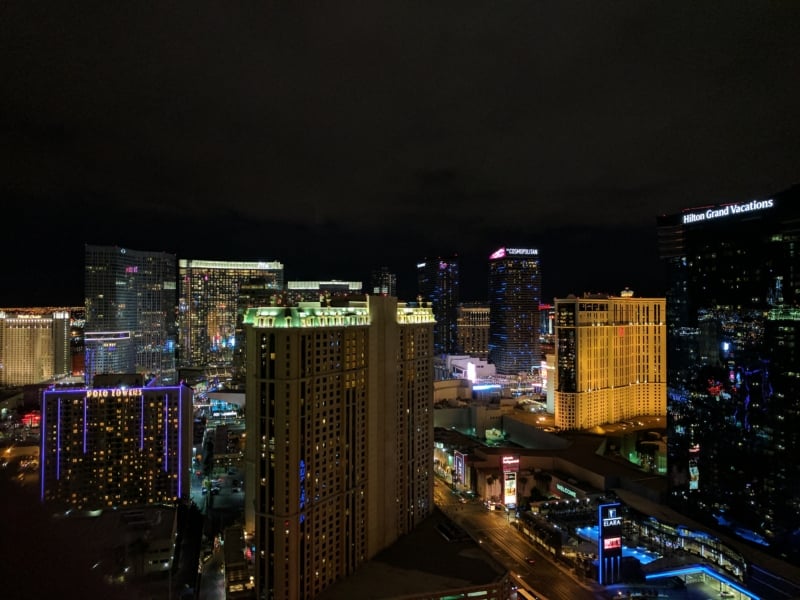 The Signature at MGM Grand provides very good views of the straight along Harmon Avenue. The hotel has three towers, and you ideally would want to get a room in Tower 3. From there, you can get an unrestricted view of the cars coming around turn 14. If you stay in Tower 2 (like in the photo above), the Marriott blocks the view of turns near the Cosmopolitan, but you still can see the cars coming down the straight as they continue to the last corner just further down the road. 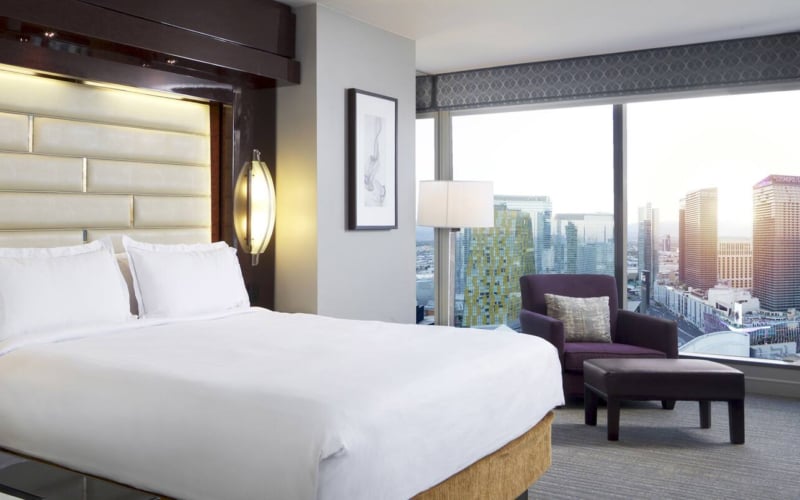 Like the Signature, the suites at Elara by Hilton Grand Vacations offer good views of Harmon Avenue, but unfortunately none of the rooms have balconies. The corner rooms on the street side may be the best bet, and I’d make a guess by saying the best rooms might be the corner units on the south end of the building, but it’s hard to say what the view around the grand stand will look like once the F1 complex is completed. Bookings can be made one year in advance.

The Platinum Hotel and Spa 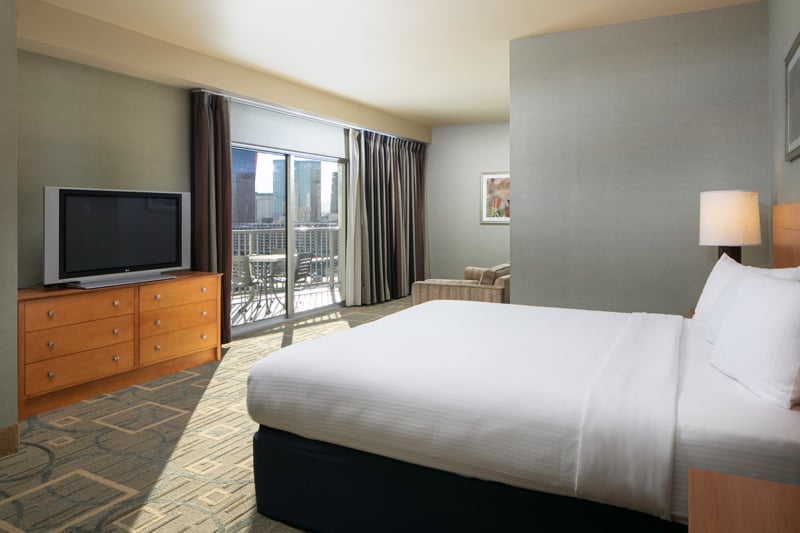 Even though the Platinum Hotel and Spa is not a top choice in my usual Vegas line up, it’s situated on the straight between turns 4 and 5. Sadly it is hard to say how far beyond turn 4 may be visible and I am sure a number of stands will be built around those corners. The view of the straight however is excellent, and it’s possible to witness some overtaking action as the drivers come out from the initial turns.

Those staying here should book the Marquise Suite as this has an outdoor balcony and a view of the strip (double check with reservations just to make sure). Bookings appear to only be available 8 months out but you can always call to see if you can book further in advance.

The Palazzo at The Venetian

The Palazzo at The Venetian is definitely one of the more higher end properties on the strip, with so much to do on the ground floor, but I’m 50/50 on the views from the room. For starters, besides the few Chairman Suites (which go for around $25,000 a night on a none-F1 day), the other rooms do not have balconies or terrace access. However the strip side rooms have a pretty good view of turn 12 from Sands Avenue onto Las Vegas Boulevard. The back side of the hotel has a good view of Sands Avenue but you need to request rooms in the section that directly faces the east. From here you could see turns 9 through 11. Rooms can only be booked 12 months in advance.

While the Wynn Las Vegas does not have rooms with balconies, the strip facing rooms offer a very good view of turns 11 and 12 from Sands Avenue onto Las Vegas Boulevard. Those looking to book should get the strip-facing Panoramic View or Panoramic Corner King as these directly face the junction. Any one of the Tower Suites should be fine as well once you request the strip view. Rooms can only be booked 12 months in advance.

The Flamingo Las Vegas Hotel is located on the strip itself with a pretty OK view of Las Vegas Boulevard. Sadly none of the suites have balconies, and the angle of view is very limiting. When booking, look for rooms with a strip view on one of the higher floors. I’m not even going to bother with a pros and cons list. Rooms can only be booked 12 months in advance.

Hotels that do not have good views for F1 Las Vegas

Contrary to how some of the hotels are touting their position for the event, there are a few big brands I would stay away from IF a view of the track is very important. the list includes the Bellagio, Caesar’s Palace, The Mirage, Treasure Island, The Venetian, Harrah’s, Linq, Paris Las Vegas, and Planet Hollywood. The problem with most of these hotels is that while they have very good views of the strip and surrounding landscape, the track is simple too far out of sight, and may be further blocked off during the race.

With F1 dates still tentative, it’s a good idea to start planning ahead as this may be one of Las Vegas’ biggest events ever. As this is not a definitive list, and it will be updated as much information comes to light.