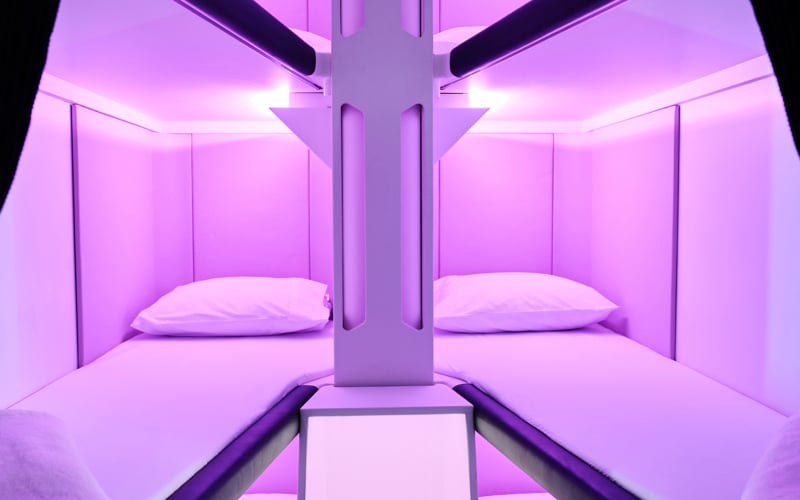 Air New Zealand has announced a number of cabin upgrades expected to be introduced on its fleet of Boeing 787s from 2024, including bunk beds on some of its ultra long models.

The airline has been hard at work developing a series of new products for its various classes based on customer feedback. According to them, passenger sought interests like the importance of sleep and need for more comfort and space. So basically every traveler globally, right? With that in mind, Air New Zealand developed a number of options to suit varying needs over a three-class configuration.

“New Zealand’s location puts us in a unique position to lead on the ultra-longhaul travel experience. We have zeroed in on sleep, comfort, and wellness because we know how important it is for our customers to arrive well-rested. Whether they are heading straight into a meeting, or to their first holiday hotspot – they want to hit the ground running.

“It’s a proud moment to finally unveil five years of hard mahi, in what truly is a cabin of possibility. One that will provide customers with options to get some shut eye wherever they’re sitting.”

The following changes are expected to be introduced to its Boeing 787 fleet from 2024 via new deliveries and retrofits. Don’t expect them on their Boeing 777s as the airline plans to phase out the older long hauls in favor of 787-10s. Let’s take a look at the breakdown of the new cabins from front to back.

The business class cabin will offer two types of business class seats. The higher end Business Premier Luxe suites have full lie-flat seats with an additional wrap-around seating area, allowing passengers to have an accompanying seat meat share a meal from the same dining table. The Luxe suites also have fully closing doors, offering lots of privacy during long flights. These seats will be fitted first on their Boeing 787-9s, with either four or eight seat configuration depending on the aircraft. They will be located at the front of each cabin section (e.g. rows 1 and 9 if 8 seats are installed).

The bulk of remaining business class seats (a.k.a. Business Premier) will come in a more traditional herringbone-styled layout with each lie-flat seat facing the aisle. Passenger won’t have the benefit of a full enclosure, but there is a partial privacy shade which comes out near the tray rest. Passengers traveling together in the middle seats can request to have the partition stowed. Depending on the aircraft layout, there could either be 42 or 22 Business Premier seats installed on their Boeing 787-9s. 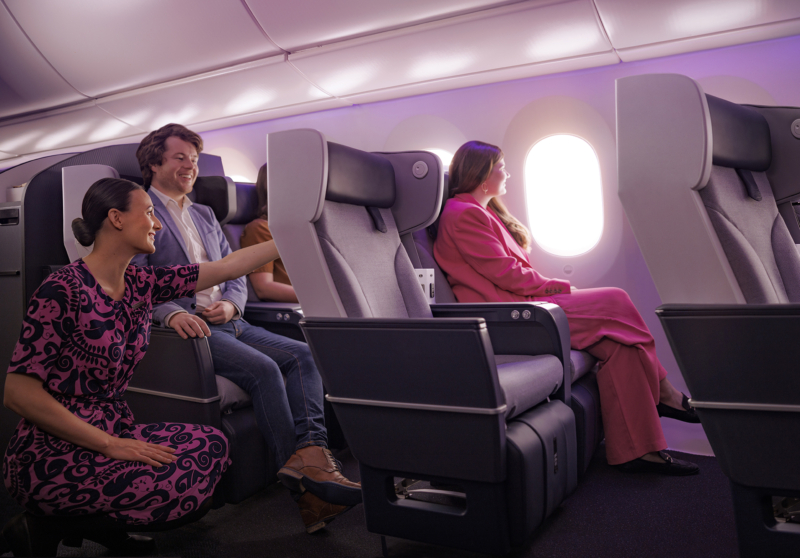 Designed by Zim, the Premium Economy cabin will offer shell-styled seats that are 19 inches wide with 41 inches of seat pitch. The seats will recline within their shell, which means if you are looking to rock back, you won’t bother the passenger behind you. Besides usual amenities like a seat back display, and USB and AC power outlets, the storage bins have been bumped up in size, allowing you to fit items as large as a laptop. There is also a foot rest and prop when the seat is extended. Bulk head seats have no foot prop though. Depending on the aircraft layout, you can expect either 52 or 33 Premium Economy seats. 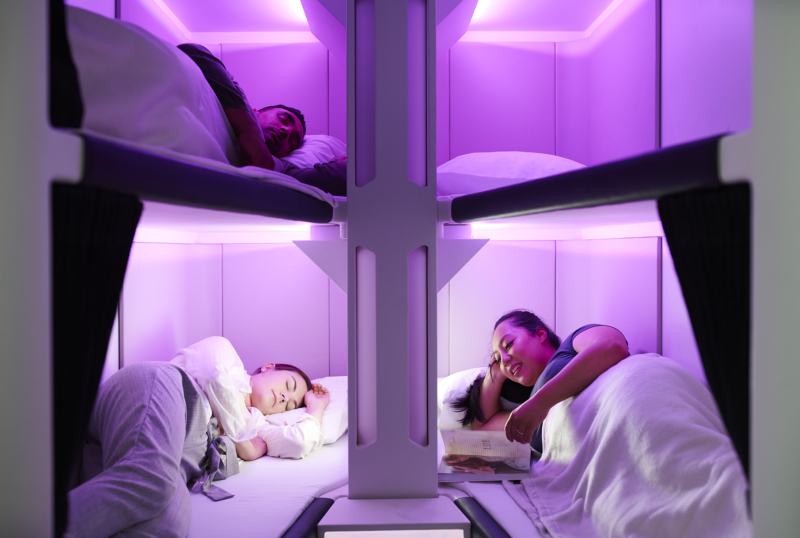 Now for the part you’ve been waiting for. Air New Zealand will soon offer 6 bunk bed-styled pods dubbed the Skynest. Located at the front of the economy cabin on its ultra long haul configurations, these beds measure 80 inches long and 23 inches wide, and include all the essentials such as bedding, pillows, sheets, blankets, privacy curtains, USB charging ports and reading lights. They’re quite similar to a crews rest area on long haul flights (usually hidden somewhere in the roof of the aircraft). The provided photos are only renditions, so I’m sure we can expect some kind of step to climb up on on the actual aircraft. From the mapping, the Skynest area will be located at the front of the economy cabin on select aircraft.

These beds will not be sold as regular seats as passengers cannot legally occupy them during takeoff and landing, but they will be sold as slotted times during the flight for a duration up to 4 hours per passenger. It’s not clear yet how these bunk beds will be sold and for what price, but I assume it would have to be reasonably done because the airline also offers Skycouches (discussed below). The carrier has the potential to sell a bunk bed up to three times depending on the length of the flight. While the idea of a bunk bed seems very interesting, social media has been buzzing with fear that these pods may not be sanitized properly between passenger usage. I guess we will see how it plays out when it comes into service. The Skynests will be available for booking by book economy and premium economy passengers.

Economy Skycouch is not a new concept to Air New Zealand, but for those not familiar with the product, one or two travelers (three if it’s one adult and two children or infants) can book a row of three seats in economy for a discounted price, and will get a padded couch-like set up with bedding, blankets and a pillow if you prefer to stretch out rather than sit up on long flights.

Economy Stretch is just another fancy word for seats with additional legroom in economy.

Last but not least, there is economy. The seats have been re-designed to offer a bit more storage, all of which have IFE screens that are 50% bigger than what is currently offered. Customers (regardless of class) can connect to the IFE system via Bluetooth for audio, and can even use their mobile devices as a makeshift remote. Depending on the aircraft configuration, you can expect there to be either 125 or 213 economy seats (including Stretch seats).

These new seats will be first delivered on new aircraft entering the fleet in 2024, but the product will take up to two years before it is introduced across the entire 787 fleet as already delivered aircraft need to be retrofitted (with an expected completion time of 2026).